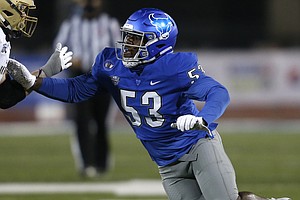 Not only will Kansas football have a new head coach, but it seems likely that there will be new coordinators on both sides of the ball for the 2021 campaign.

While no official announcement has been made yet, Lance Leipold is reportedly bringing seven former Buffalo assistants with him to Lawrence. Brian Borland, who has served as defensive coordinator under Leipold since 2007, is one of the seven coaches following his head man to Kansas.

Given his resume, Borland figures to be KU’s new defensive coordinator. So much so that he actually changed his Twitter bio to reflect that Tuesday night before eventually switching it back. Still, it seems safe to assume that Borland will be directing the Jayhawks’ defense.

As a result, here are three things to know about Borland before the official announcement:

A scheme change is imminent

With D.J. Eliot directing the defense, Kansas has utilized a 3-4 defense as its base formation over the last two seasons.

That will change with Borland taking over the unit, as he has operated out of a 4-3 front for as long as he’s been a play caller. It essentially puts an extra player on the defense line, so the Jayhawks will have a four-man front now.

Given how much football formations have evolved over the years, player alignments will likely still rotate and there will be different looks mixed in as well. In fact, the Jayhawks rarely even operated out of their 3-4 base last year.

That said, expect Borland’s defense to be pretty consistent. According to an article from 2013 in the Wisconsin State Journal, Borland’s defensive units usually looked the same year after year at Wisconsin-Whitewater. They leaned on explosive ends, physical linebackers and fast cornerbacks.

Borland’s defense was described as “an aggressive front with a bend-but-don’t-break mentality in the secondary and play with great discipline” in that same article. And Borland had a nice explanation of why that might be the case.

“To me, it’s the consistency of the scheme,” Borland said. “When a guy comes in as a freshman, we’re by and large doing the same thing when he’s a senior. One thing I think we do probably as good as anybody is coach technique. I think that’s a lost art, at least in some areas. We’re not winning by inventing a new defense every week and by blitzing everywhere. We’re winning by coaching our guys, our scheme, our technique.”

The numbers have been impressive

Perhaps overshadowed by Buffalo setting records on the offensive side of the ball, but the defense has been just as effective over the last three seasons. The Bulls have won 24 games over the last three years, while earning three consecutive bowl berths because of that balance.

The Bulls had one of their best defensive seasons in program history in 2019, leading the MAC and ranking seventh in the nation in total defense by allowing 291 yards per game. They only allowed 94.2 rushing yards per outing, which ranked fourth in the nation.

Buffalo was third in the MAC in total defense in 2018, but only trailed the top team by an average of two yards per contest. The Bulls also recorded 14 interceptions as a team that year, which was their best mark since 2013.

For those interested in advanced metrics, Football Outsiders has a stat called DFEI that represents the per-possession scoring advantages for each unit against an average opponent unit.

Here is where Buffalo has ranked under Borland in that metric:

For comparison, KU has only ranked higher than 84th in that metric once over that span. The Jayhawks came in at 48th in 2018. Kansas was listed outside the top-90 over the last two years under Eliot.

Borland has an interesting background, and a local connection

Take a look at Borland’s online bio and you will notice some notable stops along the way.

Not only does Borland have an impressive resume on the football field, but he also coached track and field at UW-Whitewater between 1994-2002.

In 2000, he actually led the women’s track and field team to a fourth-place finish at the NCAA Division III Outdoor Track and Field Championships. That was enough for him to be named national coach of the year.

In addition, Borland also has a local connection. He served as defensive coordinator for Baker University for three seasons between 1991-93. At Baker, he even served as the head softball coach for the Wildcats. So this area certainly won’t be new to Borland.

14 years with the same head coach...This to me is exciting,

You can see it took 4 years to get some traction at Buffalo.

The comparison of KU and Buffalo is a little different, just because the Big XII is definitely known for its high flying offenses. It'll be interesting to see how this goes this year, but really into 4 years from now.

Isn't a change from 3-4 to 4-3 limited by personnel? Does KU have enough D-linemen to provide a rotation for 4 players? Also...isn't linebacker a deep position right now?

John - Some of the depth question is a matter of how the person on the edge is labeled. An OLB could also be a fast DE. Same player. Just a different label. Some of the LB depth is also a matter of including some safeties to compensate for the pass happy oppositions. It will be interesting to see where everyone lands.

2018 was the year Bowen changed up his approach to coverage resulting in a lot of takeaways.

It will be difficult to roll this year if it’s a significantly different scheme with no spring for implementing. Still confident the pieces are there for improvement.