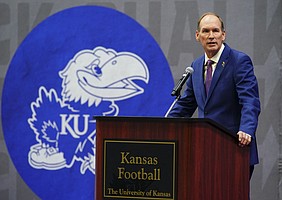 It is important to note that I’m no expert when it comes to coaching hires. Lance Leipold is just the third football coach hired by the University of Kansas during my time covering the program in some capacity.

Yet Leipold’s press conference, which took place at the Indoor Practice Facility on Monday morning, was — in my opinion — easily the most-impressive of the three.

There were no promises made. Leipold was deliberate and thoughtful with all of his answers. And he certainly seems to understand the challenge ahead of him, as Kansas has not won more than three games in a season since 2009.

None of that is to say that the Jayhawks will turn things around under Leipold. After all, coaching hires at the collegiate level are often a crapshoot. But, perhaps if KU had hired candidates like Leipold over the last few times of doing this, maybe things would have gone differently.

With that, here are my initial takeaways from Leipold’s introductory press conference:

This means a lot to Leipold

From the literal moment Leipold stepped in front of the microphone, you could just tell how much this opportunity meant to him.

After making a quick joke about his walk to the podium, Leipold started his speech by reading the notes he had in front of him. He paused for a brief moment, as he appeared to take it all in, before saying “wow” while looking around the room.

It was such a subtle sequence, but one that illustrated what this all meant for Leipold.

While every coach surely dreams of having the chance to lead a Power Five program, it probably was a surreal moment for Leipold. He is just seven years removed from coaching a Division III football program at Wisconsin-Whitewater, where he directed his team to six national titles.

If you go back and watch Leipold’s introductory press conference at Buffalo, there was much discussion about how his success will translate to the FBS level. It almost seemed like Leipold still had something to prove.

But Leipold has definitely earned this particular opportunity. He kept emphasizing how much of a perfect fit KU was for him throughout his press conference. And that is why it felt genuine when he clarified that he’s here to stay in Lawrence.

“I'm not a guy that's moved around a lot,” Leipold said. “And this is a place I want to be for a very, very long time.”

Continuity is key for Leipold

Along those lines, it seems like Leipold understands the importance of continuity.

When asked what he thought held KU back over the last decade or so, Leipold explained that the lack of stability was a big reason why. Leipold is actually the fifth coach hired by Kansas since 2010. None of the previous four coaches have lasted more than four years.

“The one thing that stands out, just on the surface, that has held (KU) back is stability,” Leipold said. “Consistency. Continuity. And those are the things that we have talked about with (KU Athletic Director) Travis (Goff) through this process.”

But it really goes beyond the man at the helm.

Leipold was eventually asked about the assistant coaching staff. It remains to be seen how all that will shake out, but don’t expect Leipold to just keep assistants around for the sake of making the transition more seamless.

Leipold emphasized that he’s not putting a staff together to just get through the 2021 campaign. He wants to have assistants who are here to stay, which certainly might make things more difficult in the short time. But the long game is the ultimate goal.

“As we put the staff together, I want to make sure this isn't for one season,” Leipold said. “We are going to put together a staff for the future — back to the word about continuity and consistency.”

“If the same people are in the room, you have a chance to keep working on something new to get better and not going back in and re-introducing somebody to them,” Leipold added.

Leipold taking one day at a time approach

Throughout his five-minute introduction speech and the 30-minutes Q&A session that followed, Leipold was adamant that the rebuild won’t happen overnight. This is going to be a process.

While that can come across as a cliche at times, it was truly important that Leipold understood the challenge ahead of him. The Jayhawks are coming off a winless campaign in 2020, and things may not be much better in 2021 with a coaching cahnge taking place this late in the spring.

So when Leipold was asked what he would consider a successful season this fall, his answer was perfect given the circumstances.

“We want to stay in the moment,” Leipold said. “We got to be able to find ways to get better here today. And that'll translate when we continue to go through the daily process of improvement, and establishing what we want to be, the wins and losses are going to take care of themselves.”

All indications suggest that Leipold knows this will be a process, and he’s not trying to take shortcuts. Whether or not the rebuild happens ultimately remains to be seen, but it finally feels like KU has the right man to at least try it with.

For comparison, here is Leipold's introductory press conference at Buffalo

Interestingly, the coach with the longest time here in the past decade had the worst W%. IMO, he/DB also inherited the worst roster scenario and made the biggest improvement.

I like that he’s talking about day to day improvements just like the mantra of Jones and the players from this spring. Hopefully it’s the beginning of the continuity.

Looks like we lost a DB, though Agbaw hadn’t seen the field in 2 years. Wish him well but maybe better off for all.

Right out of the new coach at a losing football program speech #101.

Actually it was and wasn't like the typical acceptance speech, because he stressed day to day improvement, continuity and player development. He does not believe in the passing game, or the running game, or this formation or that, he believes in utilizing the talent of the best players you have.

So simple, yet so lack over the last 12 years.

And Goff had a great comment also, that it's going to take some buy in from the fans. The team needs us, just like it needs to improve the players, the fans could improve also. Those of us who have stood by this joke of a program, have to try to put away our understandable cynicism and try to really give this a chance. If there is really day to day improvement going on, we will see that.