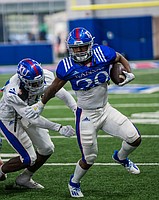 For the first time in two years, a spring game was played at David Booth Kansas Memorial Stadium.

Thanks to a unique scoring system, the White team (defense) earned a 74-42 win over the Blue team (offense) on Saturday. While there is only so much that can be gleaned from an event like this within any collegiate program, it was the first time to watch KU in action since its winless campaign in 2020.

Because of that, here are three initial observations from this year’s spring game:

The scoring system was probably too cute

Shortly before the spring game began, it was announced that there was going to be a different scoring system than normal.

The offense had its standard ways of scoring such as a touchdown, field goal, two-point conversion and extra point attempt. The offense also scored three points for an explosive play, which was a run of 12-plus yards and a pass of 17-plus yards. If there were two more first downs on a drive, the blue team also netted a point.

All of that led to a blood bath early on.

The Kansas defense held a 51-14 advantage by halftime, and they certainly earned a lot of that. The offense put together more sustainable drives in the second half, many of which ended in field goals.

But maybe next year the scoring could be more standard.

KU’s defense was flying around

All that said, the Jayhawks were playing very well on the defensive end on Saturday. That should be expected, with the offense learning a new system and the defense returning a lot of key young players.

KU’s defense just looked ready to play, as everyone was seemingly flying around to the ball.

Safety Kenny Logan Jr. made a nice open-field tackle on fourth down, forcing a turnover on downs on the opening possession. Linebacker Nick Channel came through with a third-down sack to end the next trip.

Malcolm Lee intercepted a bad pass from Miles Kendrick, who was looking to dump it off to his running back. Jay Dineen forced a fumble early on, Kyron Johnson came through with a sack on fourth down as well.

Yet the biggest play of the game was a pick-six from cornerback Jacobee Bryant. The freshman from Evergreen, Alabama undercut a comeback route, in which quarterback Jalon Daniels was trying to connect with receiver Jordan Brown.

To the 🏡! #RockChalk@jacobeebryant33 steps in front of the pass and takes it all the way for six! pic.twitter.com/nVASGEeRQn

In total, Kansas finished with three interceptions as a team. The Jayhawks forced two fumbles, recovering one of them. And, in fitting fashion, the spring game ended with a sack after an evening full of them.

As is usually the case every year, it looks like the Kansas backfield should be pretty solid.

Sophomore running back Daniel Hishaw Jr. and redshirt freshman Amauri Pesek-Hickson were the biggest bright spots for the blue team. The former was responsible for the offense’s only touchdown of the game.

On a second-half drive that started on the opposition’s 25-yard line, Hishaw started things off with an explosive 13-yard run. After another two-yard run, Hishaw found paydirt on his third consecutive carry. He shot through the right side of the line for a 10-yard touchdown.

.@DeuceHishaw would not be denied 😤 #RockChalk

In the first half, Pesek-Hickson shouldered the load on one of KU’s best drives of the game. He carried the ball four times in a row, which began with back-to-back 11-yard pickups. Pesek-Hickson added another 10 yards on the next two rushing attempts.

Add in the fact Velton Gardner did not play, and soon-to-be freshman Devin Neal will arrive in the fall, it is clear that KU’s running back room should be the focal point of the offensive attack in 2021.

I thought they definitely struggled. I just wanted to wait until I rewatched the game to really analyze it. I also think it is to be expected, no way of fixing everything overnight.

Agreed. The defense also looked pretty salty. They're gonna need to be.