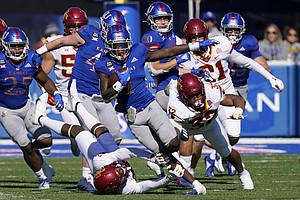 Pro Football Focus released its 2021 season preview magazine on Monday, and expectations are unsurprisingly low for the Kansas football program in Year 1 of the Lance Leipold era.

According to the magazine, the Jayhawks have a preseason Elo ranking of 117th out of 130 teams in all of college football. They have a 0% chance of winning the Big 12 title and are projected at 3.9 wins based on PFF’s initial simulation.

Five of KU’s six position units are ranked 10th out of as many teams in the Big 12 entering the season. The lone exception is the defensive line, where Kansas has the eight-best unit in its conference ahead of both West Virginia and Texas Tech.

None of that matters in the long run, however, because this is a rebuilding year for Kansas. PFF said as much in its “bottom line” sentence to sum up what to expect from the Jayhawks entering the 2021 season.

Bottom line: “Kansas made a home-run head coach hire with Lance Leipold, but the positive effects of the new regime are highly unlikely to take place in 2021, given what he inherited.”

Still, Pro Football Focus highlighted a few key players worth mentioning entering this fall. The full preview magazine is available for PDF download for those who are subscribed to their premium college football stats or grades.

It is no secret that KU’s offensive line was abysmal last year. According to the magazine, Kansas put together the worst tackle play ever last fall since PFF started tracking such data back in 2014.

Bostick was part of the reason why, as he logged 547 snaps and posted a pass-blocking grade of 44.7 during the 2020 season. He spent 354 of those snaps at right tackle, but will likely switch over to the other side of the line this year.

After surrendering 22 pressures in his first year as a starter, Bostick has to make some serious strides if KU’s offensive line is going to show any signs of progress.

Although Wilson might have been overlooked initially when six former Buffalo players transferred to Kansas, the 5-foot-11, 190-pound wide receiver could make an instant impact in Lawrence.

Wilson could really emerge as the primary target for Kansas after his debut season with the Bulls last fall. He led the team with 19.9 yards per reception while also pacing UB with three receiving touchdowns during a 6-1 campaign.

Per the magazine, Wilson ran 55 routes last year and posted a receiving grade of 87.0. Wilson was targeted on 40% of his routes, which was the fourth-highest rate in the FBS among players with at least 50 routes.

So it is not hard to see why Wilson could carve out a nice role right away.

Logan’s synopsis was especially revealing though. According to the magazine, Logan ranked second in the league in coverage grade at free safety last season, which shouldn’t be surprising given all the success he had as a sophomore.

What was interesting was that Logan didn’t fare as well when he lined up in the box. His coverage grade dropped to 18th among 24 Big 12 safeties, suggesting that Logan might be better suited to play deep on a more consistent basis.

“The 6-foot sophomore has always been at his best playing deep when he can keep his eyes on the play in front of him, so an increased role here would do wonders for the defense.” — PFF

Thanks Zenger. How you are still working in Athletics is the best example of White privilege I’ve seen today. Add Dumb David and Chowhound Charlie to that list of idiots who made millions of dollars doing incredibly stupid things.

3.9 is essentially 4 Ws. Coastal Carolina is ranked by some(?many?) as better than half our conference opponents. 4Ws would essentially mean beating our fcs opponent as well as Duke and 2 conference teams. That’s about the most optimistic review I heard in ages.

Also interesting that DL is relatively the best part of the team.

The last 12 years have truly sucked for Kansas football.......no doubt. Of those 12 years, Les did the best to at least set a foundation, build a team from high school kids and build a program, but even he screwed up as we all know.

With those two sentences now written, I'm leaving the ghosts and the past of the last 12 years of Kansas football behind and only focusing on the future and the already positive vibes from HCLL and staff. I think we finally got the head coach hire right. A no nonsense, down and dirty, no flash football coach. One that has a history of success on the field, been able to keep a staff in place, recruit and coach (players, staff, game day, e tc.). And early updates are showing this staff will be able to recruit at this level as well.

The program seems to be on solid footing and I'm as excited as I have been in a long time to get back into Memorial and see this team play some football. Godspeed HCLL, staff and team as you solidify the foundation and move the program forward.

I must agree, Greg. It is just a matter of time now. It will be fun to go to the game knowing the coach on our sideline is just as sharp as the guy coaching the other team.