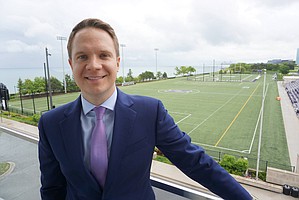 Newly named University of Kansas Athletic Director Travis Goff, is shown at his former school, Northwestern, where he served as the Wildcats' Deputy AD since 2012. Goff graduated from KU in 2002 and was hired by KU Chancellor Douglas Girod on April 5, 2021. by Photo courtesy of Kansas Athletics

Travis Goff was formally introduced as the new athletic director at Kansas Wednesday morning at the Lied Center.

Goff, who is a 2002 graduate of the University of Kansas and native of Dodge City, is the fifth AD hired by Kansas since the late Bob Frederick retired in 2001. He takes over this position at KU after nine years as the Deputy AD at Northwestern.

This hire was made 26 days after Kansas and former AD Jeff Long agreed to part ways on March 10.

Following a nine-minute introduction speech from Goff, there was a Q&A session that lasted about 20-plus minutes with members of the media who were in attendance.

As someone who watched from home, here are a few takeaways from Goff’s introductory press conference:

This presser felt different because Goff was sincere

I’m not going to pretend to be an expert on introductory AD press conferences, because this is only the second one I’ve seen since joining the Journal-World.

That said, this one felt different from when Long was introduced because Goff appeared authentic. His passion for KU was obvious, which makes sense because he graduated from this place nearly 20 years ago.

It is easy to see how a candidate like Goff would have emerged as a frontrunner. He was deliberate with his answers, using hand motions to help get his point across. Goff’s emotion was especially evident when he was thanking everyone who helped him get to this position.

The quote that will stand out — and will probably lead most stories about this presser — is when Goff called this exact position his destination job. And it certainly felt genuine when he said that.

“This is my destination job,” Goff said. “This is where I received an incredible education, where I started my career and where I fell in love with college athletics. It is an absolute honor of my professional lifetime to come back and serve my alma mater, a place that has done so much for me.”

Rather than use some catchy buzzwords, it was noticeable that Goff mentioned his passion for student-athletes throughout his time on the stage. He acknowledged that is why the athletics department exists in the first place, and pointed out how fitting it was that he started the new job on National Student-Athlete Day on Tuesday, April 6.

“To those nearly 500 student-athletes, you are why we are here,” Goff said. “You are why this career exists. And I'm going to remind myself of that daily when you can get lost in the emotions or energy or the distractions of college athletics.”

Goff also cited the importance of making sure student-athletes are happy when he was asked about possible facility upgrades. He notably played a big role in Northwestern’s fundraising efforts of raising over $440 million in his time there.

Goff admitted facilities were important because student-athletes spend so much of their time there.

Goff was asked a few different ways about his thoughts on the next football coach at KU, but he was not ready to commit to a plan as of Wednesday morning. Goff did admit to meeting interim coach Emmett Jones on Tuesday during his first day in Lawrence.

“I come in open-minded,” Goff said. “I come in wanting to listen, learn, absorb, understand where we're at with this football program. There's a plan, and it's more about the when and the understanding of how to go forward in that plan.”

That could come across as Goff just ducking those questions, but it seems perfectly reasonable to not have all have the answers on Day 2 of a new job. It is understandable why Goff is being patient, and he appears to be willing to entertain all options.

Goff has to do his due diligence here, especially since this is all so new for him. It would make sense to first see if Jones is the right person to lead KU football moving forward before looking for potential outside candidates.

I’m not saying either move is necessarily right or wrong. I just think it is fair to give Goff time to figure out what is best for the program. Ultimately, that is what he’s going to be judged on during his time here. So there is definitely no reason to rush it.

I didn't watch the presser, nor will I. Reading the quotes and comments, I basically see it as, there is an IHC holding down the fort, while he focuses on getting the HC in the door. He's not going to signal that he is in the process of hiring a coach, because that will distract from anything that may happen in the process.

Ultimately, I read that he has 3 or 4 ideas of who the head coach could be and wants to meet with them to see how interested they are in the role and if they would have the same vision he has.

He will be patient, but I don't believe he will wait much past May. In fact with spring practices, I would expect the future head coach would want to see a few of those to see what he is inheriting. I guess I wouldn't be surprised if the HC is announced in the next 4-10 days.

Could only watch the first portion but I definitely agree with Shane’s take on Goff being authentic.

I’m a bit confused by his statements on football as they seem to contradict. But I’m guessing we we will know the plan within a few days.

Here’s hoping that bringing in a Jayhawk helps get some positive mojo going for KU Athletics.

I was born and lived in Ashland, Kansas, about 45 miles south of Dodge City, so was most pleased another southwestern Kansan being chosen to lead the KU Athletic Department.

When our current young football Interim Head Coach interviews, if he doesn't include a thesis on clock and time-outs management, we better move on now. Those were game management situations that were the first red flags that Coach Beatty was in over his head. I'd be happy as a Jaylark if he happens to turn out to be our man and a success, and I trust our new AD to have the good judgement to determine such a positive outcome.

I wonder what he asked and what he was told about the KU NCAA death struggle.

I am also curious about all the players coming to KU. Don't they know we could be on probation next year? Maybe they don't care, or just maybe they know something we don't.

I honestly don't think the NCAA decision...or what ever that independent board is called...will the the end. If negative against KU, I fully suspect a court injunction and a lawsuit to follow. So this isn't done in the next year or possibly two. Plenty of time to get a year in with a premier program to leverage your future.

The KU ncaa deal is done. Whatever happens is out of our hands; his hands. There will be some penalties but it won’t be a death penalty and things will go on. Students will come and go, but when they are here, when they are Jayhawks, they will be what is important.