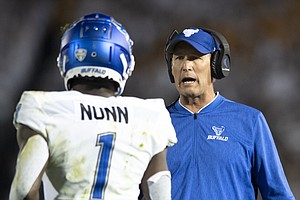 After what appeared to be a thorough coaching search, the University of Kansas officially picked Lance Leipold to take over its football program on Friday. And the case for Leipold, who came to KU after six seasons at the helm at Buffalo, was really never hard to make.

Leipold is the fastest coach in NCAA history to reach 100 career wins at any level. He won six national titles while serving as the head coach at Wisconsin-Whitewater (Division III) for eight seasons from 2007-14. He also guided Buffalo to 24 victories over the last three seasons, all of which ended in bowl berths, during the most successful three-year run Buffalo history.

Yet I can’t help but think the decision to go with Leipold is so much more than that, especially when you consider the other reported frontrunner.

It is no secret that Army’s Jeff Monken was viewed as the other possible candidate for KU. There were other candidates, of course, but this was really considered a two-man race for much of the process.

And that’s why Leipold’s versatility might have been his biggest selling point in the end. During his time in Buffalo, the Bulls showed the ability to be effective through the air or on the ground, depending on their personnel in a given season.

Thanks to running back Jaret Patterson leading the way in 2020, Buffalo ranked second in the nation with an average of 287.43 rushing yards per game. The Bulls piled up 2,012 yards and 32 touchdowns on the ground on their way to being ranked in the AP Poll for the first time in program history.

Patterson, who is expected to get drafted this weekend in the 2021 NFL Draft, accounted for 1,072 rushing yards in just six games. He piled up 409 rushing yards in a single game against Kent State, which is the second-best rushing performance in FBS history.

In this offense, Patterson was eventually named the winner of the Vern Smith Leadership Award, given to the MVP of the MAC and was also named the MAC Offensive Player of the Year.

As opposed to running a preview newsletter today, I'm leaning into the brand. I've unlocked this story from November on how Buffalo's offense works for the sake of Kansas fans that want to know more about Lance Leipold https://t.co/kkQnNKqTX4

The 2019 season was much of the same, with Buffalo ranking 10th in the nation in rushing by recording an average of 250.46 yards per contest.

However, the Bulls were closer to an even split between the pass and run in 2018 with Tyree Jackson at quarterback. They threw for 3,155 passing yards and recorded 2,648 rushing yards on their way to winning 10 games for the first time in program history.

Buffalo's offense had a record-breaking season during that 2018 campaign. Buffalo scored 484 points, 64 touchdowns and totaled 5,803 yards of total offense to set new school records in each category. Jackson was named the MAC Offensive Player of the Year, while Patterson earned MAC Freshman of the Year honors.

Jackson’s first year as the signal caller was in 2017, when he led the Bulls to the 22nd-ranked passing offense in the nation. They averaged 290.8 passing yards per game, as Jackson went 143-for-237 through the air for 2,096 yards and 12 touchdowns.

All of that is to say that Leipold is comfortable doing whatever it takes to win. He’s not afraid to adapt to his team’s strengths. Leipold even uses a variety of personnel packages in a given game, as he explained on the show "Tennessee Two-A-Days" on Jan. 21.

“A lot of those philosophies have always been there,” Leipold said on the podcast. “The philosophies in the room are very similar, and one of the things is, we want to be as balanced as possible and utilize as many formations, but also utilize our personnel in the best (way).”

“Most of my career has been in the northern part of the United States,” Leipold added. “If you’re going to win games and want to play games in November — and if you want to play beyond that — you better be able to run the football at certain times. And be able to stop the run. But, at the same time, you want to be able to spread it out and take our shots down the field accordingly.”

Now compare that to the other frontrunner, Monken, and it is easy to spot the difference.

Army has been an elite rushing team behind its triple-option attack, where it eats up a lot of clock and limits possessions for both teams. Passing attempts are few and far between, which does lead to a legitimate concern about if a team ever faces a big deficit.

The other obvious reason for concern would have been recruiting. A coach has to get certain players to run the triple option effectively, and what happens to the roster when that particular coach does leave?

Maybe Monken would have implemented a different offense, despite all the success he’s had in his career with that scheme. Maybe it would have looked similar to Coastal Carolina’s option attack, which used a lot more shotgun formations.

I actually think there is reason to believe Monken's offensive scheme could have worked in Lawrence, and it would have been very entertaining to watch. Yet, if Leipold’s versatility is ultimately how KU decided between two strong candidates, I can’t say that I blame them.

I like the hire but sure hope Monken isn't hired at A&M when they hire again next year. I think its pretty telling when you know pretty much what they're going to do and you still can't stop it.

This sounds a lot like what the players have commented about the new O this spring. It sure would be nice if there was some continuity regardless of the coaching change. From a 24/7 article about the players being ready for the spring game, it sounds like there’s been some good positive change already. Let’s keep building on it.