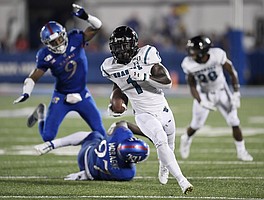 Year 2 of the Les Miles era is set to begin this weekend when Kansas hosts Coastal Carolina for a rematch of KU’s most forgettable performance from the 2019 campaign. The Jayhawks, who suffered a 12-7 defeat at home to the Chanticleers last season, are favored in the 2020 season opener by 6.5 points as of Tuesday morning.

The line via FanDuel’s Sportsbook has continued to move in KU’s favor after the team opened as a four-point favorite, but it isn’t crazy to wonder if the wrong squad is favored in a game that will kick off at 9 p.m. and be televised nationally on FS1. The over/under is currently set at 56.5 points for a contest that won’t have fans in attendance.

It is a new season, and Kansas could avenge last year’s stinker that ended with a memorable locker room celebration by Coastal Carolina. Vegas tabbing the Jayhawks as a favorite should still be somewhat surprising, though, and it’s not just because of last year’s result at David Booth Kansas Memorial Stadium.

Running back CJ Marable, who is 5-foot-10 and 200 pounds, is one of the many familiar faces back for this year’s rematch with KU. Marable accumulated 1,085 rushing yards and 11 scores on 204 attempts as a junior last year, which included a 148-yard performance against Kansas. Quarterbacks Fred Payton and Bryce Carpenter, who both saw time under center last season, are also back. The Chants even bring back their top-three receiving threats and an offensive line unit that has more than a 100 career starts.

Kansas, meanwhile, is not nearly as experienced ahead of the 2020 opener. The Jayhawks have just 42% of their returning production coming back, which ranks 126th out of 130 teams. KU only has 41% of its offense returning, including the all-important starting quarterback position that remains up in the air just a few days away from kickoff.

Kansas is a 6-point favorite over Coastal Carolina. Last year KU lost 12-7 to Coastal as a 7-point favorite at home. According to @ESPN_BillC, KU is 126th in returning production, Coastal ranks in Top 20, including almost all of its offensive production. Another upset on tap?

Now, returning experience doesn’t necessarily equate to wins and losses. However, in a year where the offseason featured a number of obstacles because of the pandemic, perhaps continuity should carry more weight when making a betting line for the opening weekend.

There is an argument to be made that Kansas should be the underdog. ESPN’s Football Power Index gives Kansas a 46.3% chance of victory against Coastal Carolina. Action Network’s model says that the Chanticleers should actually be favored by 3.5 points on the road.

None of that is to say KU has no chance of winning, of course. There will be plenty of content posted this week about how the Jayhawks could get their revenge this weekend. I’m not even sure who I’m picking to win just yet.

But, given all the unknown to go along with last year’s result in this matchup, I’m just surprised that the betting line is giving Kansas the benefit of the doubt.

Interesting stuff, Shane. The win probabilities are the most striking to me.

How does KU win this game?

Year two under Miles would normally be a big factor in our favor, but that is somewhat muted by the trump virus, the missed spring camp, summer program, etc.

Should we assume that, even though he was the worst recruiter in the Big 12, that Beaty actually brought in higher level talent than the Chanticleers? The answer should be yes. So, even though CC returns more, we should return better.

It is a home game, so we get the three-point bump there.

Revenge? It’s got to be on everyone’s mind. Will that help you win a game?

As you point out, there isn’t much hard, clear evidence that points to a KU win. It seems that a lot of people are putting a lot of stock in Mies and Company, and their ability to build a real team. That’s all we’ve got and that’s enough for me.

Yeah, like I said, I'm not even sure if I would pick against KU at this point. Haven't put too much thought into it, but I'll have an official pick by the end of the week. I'm more surprised that Vegas seems to be giving KU the benefit of the doubt. And by a decent margin. The spread was as high as 7.5 points Monday night. Action Network's model has adjusted home-field advantage to just 1 point, so 7.5 seems steep when you factor in the no crowd. All that is to say, I can see a scenario where KU wins this game and cover. I was just surprised at the spread, given the FPI numbers and the returning production. Regardless, excited to have football back!

The betting line, and even more so movement, is based on who’s betting what. I think it just reflects the greater fan base of KU, and sentimentalism over overt facts. The other models are fact based, hence the difference.

That being said, I think we win for a couple unsentimental reasons that don’t show in the models:

1. Different OC - I’m confident we’ll do something other than run into a stack box, and put up more than 7 pts. A lot more. The huge question though is QB production. They’ve got to complete 60%, and preferably 65-70%.

2. Dru Prox wasn’t part of the production that wasn’t producing most of last year but is returning. Big question is will others be stepping up to fill the void? Lots of opportunities on D.

6.5 seems a bit generous, especially since we have yet to determine who is behind center.