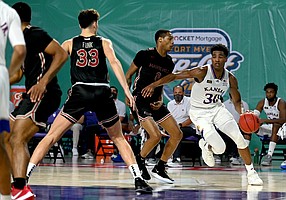 Kansas junior Ochai Agbaji drives past a defender during a game against Saint Joseph's on Friday Nov. 27, 2020. The Jayhawks earned a 94-72 win over the Hawks in the Rocket Mortgage Fort Myers Tip-Off at the Suncoast Credit Union Arena in Fort Myers, Florida. by Photo by Chris Tilley

Vegas likes KU’s chances in a highly-anticipated matchup with Kentucky in the Champions Classic.

According to Vegas Insider, tonight’s battle of blue blood basketball programs essentially opened as a pick 'em. The opening line had Kansas favored by 0.5 points with an over/under of 144.5 for the total score.

The Jayhawks are now favored between 4.5 and 5.5 points on most online sportsbooks as of late Tuesday morning. The game is slated to begin at 8:30 p.m. tonight in Indianapolis, Indiana, but it seems unlikely that there will be much more line movement before then.

Kansas is a 4.5-point favorite over Kentucky on FanDuel’s Sportsbook. The over/under for this game is currently at 146.5 total points. Kentucky’s moneyline is at +168, while KU’s moneyline is -200 at the moment.

In terms of team totals, Kansas has an over/under of 75.5 for this matchup after scoring 90+ points in each of its first two games. Kentucky’s team total is at 71.5 points after scoring just 64 points in a 76-64 loss to Richmond last time out.

As per usual, most of these numbers fall in line with what KenPom projects. KenPom gives KU a 60% chance of victory against Kentucky. The Jayhawks are projected to win by a 74-71 margin on KenPom.

But I mention KenPom enough. Let's see why all my go-to college basketball gambling analysts are backing the Jayhawks at almost any number tonight.

Here is what gambling analysts have had to say about this matchup so far:

“While both teams lost key players during the offseason, Kansas is the more experienced team in this matchup. Lay the 3.5 point spread at DraftKings and bet on the Jayhawks.” — Ben Heisler wrote in his preview for SI.com.

The Kansas/Kentucky line continues to move for KU. Opened at -3.5 and is up to -5 at some books.

Anything more than that is too rich for my blue blood... pic.twitter.com/AGtBjwYQNL

“The difference is Kansas isn’t quite as experienced as Richmond, but they are experienced. Marcus Garrett is a senior point guard. (Ochai) Agbaji has got some experience. Mitch Lightfoot is 25-years-old, it feels like.” — Jeff Goodman on Best Bets, which is a gambling podcast that is part of The Field of 68.

Goodman also added: “(KU) is experienced and talented enough that this could be ugly.”

“I feel like this is a buy-low spot for Kansas.” — Rob Dauster on that same Best Bets podcast. Full show can be found wherever you listen to your podcasts or catch a replay of the stream on Twitter.

“I expect Garrett and Agbaji to frustrate the Kentucky freshmen scorers while attacking the basket and exploiting their defensive inexperience. (David) McCormack should limit (Olivier) Sarr on the interior as well.” — Mike Randle wrote in his preview of this game over at the Action Network.

Randle added this in that same preview: "This will be another valiant effort by the young Wildcats that falls short against an early-season veteran team."

Shane's favorite picks for a great day of college basketball

Ouch. That IU pick is looking rough as they are currently down 21. Texas -8.5 for the win.

Let's hope the experts are right. We still have a long way to go to catch up in the head-to-head record against UK (not to mention in the race for first in overall wins).

How did you do? I stayed away from the line. KU moneyline and KU/Michigan St moneyline parlay.