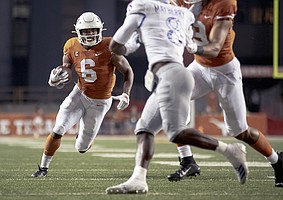 TCU opened as a slight favorite, so I hope you got the early line for better value. I’m still willing to take Texas at this latest line, as the market might be overreacting to a 50-48 win over Kansas last week. The Longhorns might be struggling on defense, but this offense is potent and will make enough plays to win this game.

California (4-3, 1-3 in Pac 12) has dropped three consecutive games, including a 21-17 loss to Oregon State last week. While I don’t think the Bears will win this game, their defense is legit enough to cover a three-touchdown spread. California is giving up just 18.7 points per game this season, and the total for this game is set at 36.5 points.

Playing an over in a Big 10 contest can be a dangerous game, but this total is a bit too low for me. Wisconsin (6-1) has a strong defense, but Ohio State (7-0) quarterback Justin Fields is leading an offense that averages 49.7 points per game. He has 30 touchdowns and only one turnover this year. Give me the over in this one.

Under of the week: Oklahoma State at Iowa State (63.5)

My pick for this game is below, but I feel more confident in the under. Much like my over pick, playing an under in a Big 12 game can be a silly suggestion. But ISU’s defense has been playing much better as of late. In Big 12 play, Iowa State is giving up just 21.3 points per game. Oklahoma State, meanwhile, is averaging 29.5 points per game in league play.

I’d like this line a lot more if it was closer to the opening line of 5.5 points, but you couldn’t pay me enough to bet on the Falcons. Atlanta’s pass defense is really bad, and Russell Wilson will be able to get back on track this week after making some mistakes in a wet loss to the Ravens.

Notable nugget: Fading KU as a slight underdog has been smart

Instead of a sixth bet suggestion, I’m including a relevant piece of information about this week’s game. Kansas is 3-0 against the spread this season as a three-touchdown underdog or more, which includes last week’s narrow loss at Texas. When the line is two touchdowns or less, however, KU is actually 0-4 ATS. But you can see if our crew believes in this trend in our picks below.

Lines via FanDuel's Sportsbook as of Tuesday afternoon. Sign up today using this special promotion.

Shane - congratulations on leading the standings though I’m not sure it’s saying much when you’re the only one better than a coin flip?

Haha you have a fair point. I'll always take being at least 55% ATS though, especially since we include the NFL every week and that is the toughest sport to bet on.