KU football opens as 14-point underdog against No. 11 Baylor 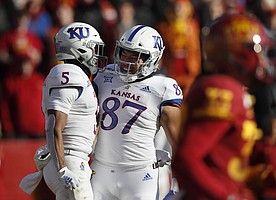 The 2019 season will come to an end this weekend for the Kansas football team.

While it might not seem like the Jayhawks have anything to play for, it could be important for the program to head into the offseason with some momentum. KU will also be honoring its seniors when it welcomes No. 11 Baylor at 2:30 p.m. Saturday at David Booth Kansas Memorial Stadium.

According to the early betting line, Kansas will face another tall task this weekend when it squares off with one of the better teams in the conference. The Jayhawks (3-8, 1-7 Big 12) are considered a 14-point underdog against the Bears (10-1, 7-1) in the final game of the regular season.

The early betting line is actually about 10 points better than it was last weekend, when KU eventually suffered a 41-31 road loss to Iowa State. Baylor, meanwhile, is coming off a 24-10 win over Texas. The Bears also have a trip to the Big 12 championship game looming.

Baylor has covered the spread in three consecutive contests. This weekend figures to be just the third time that the Bears have been double-digit favorites in Big 12 play. They failed to cover in both instances against Texas Tech (-10.5) and West Virginia (-18), winning by a field goal in both outings. For the season, Baylor is 7-4 against the spread.

KU is 5-6 ATS this season, which includes a 4-2 clip over the last six games. The Jayhawks have been a double-digit underdog in six games this season, covering the spread on four different occasions.

As of Monday afternoon, the over/under for this game was 53.5 total points on FanDuel. KU has hit the over in three of its five games since Brent Dearmon was promoted to offensive coordinator. However, the under has hit in each of Baylor’s previous two contests.

Baylor has a 14-4 advantage over Kansas in the all-time series, including a streak of nine consecutive wins.

All of these lines are presented by FanDuel’s Sportsbook. Sign up today on FanDuel using this special promotion.

I suspect the 14 point spread was before it was announced that Charlie Brewer is a go for this weekend. Before today's press conference it was not known whether his injury would keep him out of this game. It will be interesting to see how the line changes now...

They took the line down Sunday night/Monday morning, and I assumed it was because of Brewer. The line was posted again Monday afternoon, when it was announced he was good to go. So this line is based on Brewer playing.

This game is meaningless in the standings. Baylor will play OU for the conference title and we have already assured ourselves of last place. Any chance Baylor will overlook this game?

Good point Dale. It could also be a result of us rebounding a bit at Ames after a couple pretty lethargic games. It is also our senior day. I was actually surprised it was so low.