Devonte' Graham is headed to the G League 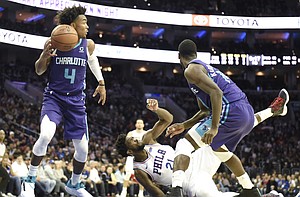 Charlotte Hornets' Devonte' Graham (4) picks up a loose ball as Philadelphia 76ers' Joel Embiid (21) falls to the floor in the second half of an NBA basketball game, Saturday, Oct. 27, 2018, in Philadelphia. The 76ers defeated the Hornets 105-103. (AP Photo/Michael Perez)

NBA rookie Devonte’ Graham is headed to the G League — at least for a few days.

Charlotte general manager Mitch Kupchak announced the move for the second-round draft pick out of Kansas on Tuesday, a little more than a week after Graham made his Hornets debut.

According to The Charlotte Observer’s Rick Bonnell, Hornets coach James Borrego said Wednesday Graham will play for the franchise’s Greensboro affiliate for at least the first two games of the Swarm’s season.

Graham played in his first career NBA game on Oct. 22 at Toronto, spending less than six minutes on the court and going shot-less and scoreless with one assist.

The 6-foot-2 point guard got an extended look this past Saturday, when he scored his first points as a professional, finishing with seven in 13 minutes off the bench in a loss at Philadelphia. Graham knocked down one of his three 3-point attempts against the Sixers for his first bucket, shot three of six overall and dished a pair of assists.

To date, Graham was inactive (didn’t suit up) for four of the Hornets’ eight games and did not play in two others.

Moving Graham to the G League comes as no surprise, as he’s playing behind an all-star in Kemba Walker and a savvy veteran in Tony Parker. It also doesn’t mean that Graham will spend the whole year in Greensboro.

Plus, it actually allows the rookie to get some valuable in-game reps against G League competition, rather than watching from the bench with Charlotte. And the Hornets can bring him back whenever they want to further test him at the NBA level or perhaps even provide Parker, 36, with a night off.

As a second-round draft pick, Graham reportedly signed a three-year contract with the Hornets for approximately $1.3 million per year, with the first two years guaranteed.

And, because the Hornets are owned by Michael Jordan, Graham also gets some perks in the form of a basically unlimited supply of Jordans — as he showed off recently on Instagram.

He belongs to the NBA, he destroys G-league already. He's perfecting his jumpers - something that he hasn't done much in college. Now, he is a more complete player. 31pts, 7 reb, 6 ast, 4 steals!!!