Marcus Morris: Confrontation with Khris Middleton dates back to their college matchups 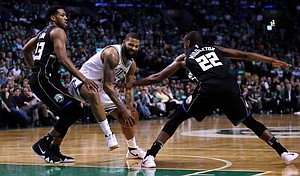 When Boston’s Marcus Morris and Milwaukee’s Khris Middleton started leaning into each other with a little more oomph while jockeying for position and barking back and forth even louder than normal during a playoff matchup Tuesday night it wasn’t because the two had grown sick of each other less than two games into a best-of-seven series.

According to Morris, the chippy nature of their encounter, which culminated with Morris fouling Middleton hard on a drive to the paint in the second half, dates back to their days in the Big 12.

"I've been competing with Khris since college, when we used to kick they ass in Kansas," Morris told The Republican after the Celtics’ victory, referring to Midleton’s days at Texas A&M. "He's a good player. No hard feelings, but I'm coming to play. I know he is. We're gonna go back and forth."

Apparently it didn’t take much for Middleton, now the Bucks’ second-best scorer, behind Giannis Antetokounmpo, to rub Morris the wrong way. Their paths only crossed three times during their college careers. KU and Morris went 2-0 versus A&M in 2010, when Morris was a sophomore and Middleton was a freshman. They met up just once the following year, and KU defeated the Aggies, 64-61, at Allen Fieldhouse, in 2011. As a junior, Morris scored 13 points in his home finale. Middleton, then a sophomore, scored 9 in defeat.

The two actually have squared off far more often as pros. While Middleton (15.1 points per game, 39.1% 3-point shooting through six seasons) has enjoyed a more successful career, Morris (11.2 career scoring average, 35.7% 3-point shooter) continues to get the best of his old college adversary in the NBA.

Per basketball-reference.com, Morris’ teams have gone 8-5 versus Middleton’s in the regular season since the two began squaring off in 2012-13, Middleton’s rookie year. Middleton has out-scored Morris 16.9 points per game to 13.0 in those meetings, though, and shot 54.5% from the floor, compared to 46% for Morris.

More importantly for the former Kansas standout, he now possesses a 2-0 record against the former Aggie in the playoffs. Middleton is averaging 28.0 points per game and hitting 4.5 3-pointers a game against Boston, but Morris (19.5 points per game, 50% 3-point shooting) plays for a more balanced team and heads to Milwaukee with Boston up 2-0 in the series.

“I expect it to be a hostile environment,” Morris predicted of Game 3, at Milwaukee, “especially with me. I'm ready for it. Going in same attitude, like I'm in Boston.”

The Celtics’ current sixth man, Morris played 30 minutes off the bench on Tuesday, scoring 18 points on 5-for-11 shooting, while providing 5 boards and an assist.

His fiery, sometimes physical, play provides even more, though. Just after Morris fouled Middleton late in the game and members of both teams kept that duo separated as they yelled unpleasantries at each other, Morris turned to the Boston crowd and waved his hands upwards, imploring them to get even louder. They predictably obliged.

“I’m trying to make tough plays,” Morris said, “and be that spark.”