How former Kansas standouts will factor into the 2018 NBA Playoffs 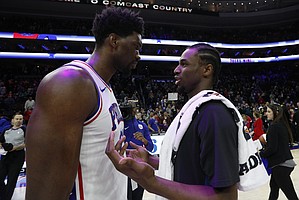 For six of the 15 former Kansas basketball players employed by NBA franchises, the conclusion of the regular season’s 82-game grind also meant the end of their hopes of competing for a title, at least for this year.

But nine other Jayhawks, embarking on the 2018 playoffs this weekend, discovered better fortune.

While some one-time KU stars are just along for the ride on teams that call upon them sparingly, a few who used to shine in Allen Fieldhouse will need to produce in the postseason — most notably two of the top three picks in the 2014 NBA Draft, Andrew Wiggins and Joel Embiid.

Here’s a look at the Jayhawks still alive for the league’s 2018 championship and what roles they will play in the weeks ahead. 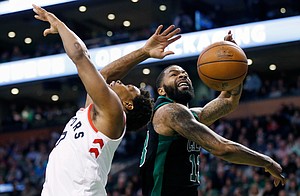 For some, springtime means giving up a form of personal vice for Lent. This April, and maybe beyond, Marcus Morris plans to give up two for the playoffs. Or so he claims.

The pledge which the 6-foot-9 Boston forward schemed second seems more manageable than the first. On the final day of the regular season, Morris proclaimed on Twitter he would shut down his account until after the postseason. The vow came complete with a “locked in” hashtag and a reference to the pending “money time” ahead.

After tonight I’m shutting my twitter down until after the playoffs! #LockedIn Money time..#Beantownbully

As for the other oath, ejections from two separate games in the season’s final weeks prompted Morris to focus on better behavior moving forward.

"Going in the playoffs, it’s nothing to worry about,” Morris said of his technical issues in the foul department. “I promise I won't get any techs — unless we're just getting blatantly cheated. I want my team to win, so I won't put my team in jeopardy or anything like that. But I'll still be passionate about the game."

The at-times volatile forward, though, proved crucial to Boston’s late-season success, as the team finished second in the Eastern Conference, despite losing All-Star point guard Kyrie Irving to injury. Morris averaged 18.8 points and shot 46.7% from 3-point range in March, as the Celtics went 9-3 and closed the month on a 6-game winning streak.

“It’s great,” Boston All-Star forward Al Horford said of Morris’ fiery nature, “and the Playoffs bring that out of you even more. We have a lot of guys on this team with an edge and Marcus is just more expressive about his. But we’re happy about that.”

The Celtics play Milwaukee in the first round. 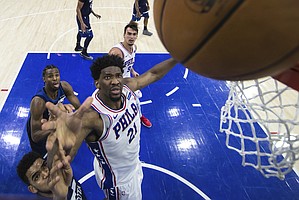 Philadelphia 76ers' Joel Embiid, right, of Cameroon, blocks out Minnesota Timberwolves' Karl-Anthony Towns, left, from the rebound during the first half of an NBA basketball game, Saturday, March 24, 2018, in Philadelphia. The 76ers won 120-108. (AP Photo/Chris Szagola)

A freak on-court mishap, when rookie guard Markelle Fultz accidentally slammed into his much larger (and more important) teammate, Joel Embiid, left Philadelphia’s starting center with a fractured orbital bone near his left eye and a concussion.

Embiid missed the final eight games of the regular season as a result and isn’t expected to play in the Sixers’ first playoff game since 2012, coach Brett Brown revealed Friday morning on The Dan Patrick Show.

It’s unclear exactly how soon Embiid will re-join the lineup for Philadelphia’s first-round matchup with Miami, but when he does he will wear a mask for protection. The entertaining center unveiled his new black mask earlier this week during pre-game warm-ups, dubbing himself “The Phantom of The Process”

“No one cared who I was until I put on the mask”.... The Phantom of The Process pic.twitter.com/JOkQxCAxYA

Philadelphia attained the East’s No. 3 seed by winning its final 16 games of the regular season, but 13 of those came against non-playoff teams. The Sixers need their temporarily disguised face of the franchise back to advance in the playoffs.

In his first campaign without a season-ending injury, Embiid played 63 games and averaged 22.9 points, 11.0 rebounds, 3.2 assists and 1.8 blocks. He’ll almost certainly garner all-defensive team and all-NBA honors. The sooner he returns the better for Philadelphia. 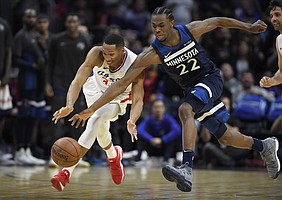 Perhaps still riding the high of helping Minnesota put an end to a 13-season playoff drought, Andrew Wiggins didn’t sound overly concerned about his team’s chances as a No. 8 seed matched up against the West’s best, Houston, in the first round.

“They’re a great team, best record in the league. But we can beat anybody, and I believe that,” Wiggins told the Star Tribune.

“I mean, I got through it,” Wiggins said, when asked to describe his season, “and it was all about the bigger picture and now we’re in the playoffs.”

The T’wolves have to get Wiggins, Towns and Butler firing on all cylinders to have a shot against Houston, an offensive juggernaut thanks to the versatility of star guards James Harden and Chris Paul. 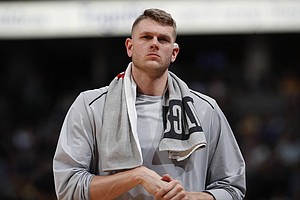 One player who likely won’t factor into the series’ outcome, is former KU center Cole Aldrich. The Minnesota native appeared in only 21 games during the regular season, logging double-digit minutes just once. 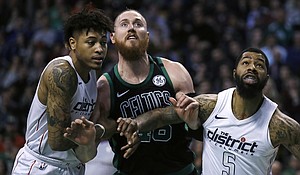 Missing its would-be all-star point guard for half the season kept Washington from reaching its expected residence in the top half of the Eastern Conference, but Markieff Morris, Kelly Oubre Jr. and their teammates did just enough in John Wall’s absence to keep the Wizards in the playoff hunt.

Fortunately for all of them, the worst teams in the East didn’t put up much of a fight, either. Wall returned on the final day of March, but the Wizards lost five of their last seven in that span. Prior to that they lost six of their last nine without Wall.

All of it added up to a team with talent and promise settling for the No. 8 seed in the East and a first-round meeting with No. 1 Toronto.

Does a Wizards upset seem even remotely feasible? Not the way they’ve played lately. Better-than-average contributions from role players Morris (11.5 points, 5.6 rebounds, 36.7% 3-point shooting) and Oubre (11.8 points, 4.5 rebounds, 34.1% 3-point shooting) certainly would help their chances against the best and deepest team the Raptors have ever had. 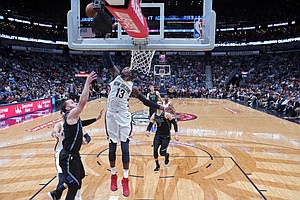 After his NCAA Tournament debut at KU two years ago, Cheick Diallo marveled at how “easy” it was for him versus Austin Peay. Here’s guessing the 6-9 forward, now with New Orleans, won’t make a similar assessment of the NBA Playoffs as the sixth-seeded Pelicans battle the West’s No. 3 seed, Portland.

Diallo has done relatively well for himself since becoming a second-round draft pick in 2016. He’s not a key member of New Orleans’ rotation by any means, but the reserve typically played between 10 to 15 minutes in competitive games versus playoff-level competition during March and April.

The second-year backup enters his playoff opener having averaged 4.9 points and 4.1 rebounds in 11.2 minutes for a New Orleans team that doesn’t require much help inside due to the presence of superstar Anthony Davis. 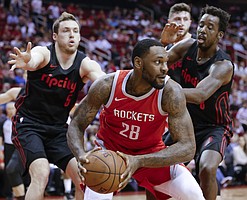 The good news for Tarik Black is he plays for Houston, which finished with the best record in the NBA (65-17). The bad news is the backup big man doesn’t get much run.

The Rockets’ dominance meant Black started as key players rested in the regular-season finale. The 6-9 post player turned the rare opportunity into a double-double, producing 12 points and 11 rebounds in a loss to Sacramento.

But don’t expect to see nearly as much — if any — of Black as Houston makes its playoff push, beginning with Minnesota in the first round. He did not play a minute in nine of the Rockets’ final 21 games. Black averaged 3.5 points and 3.2 rebounds in 10.5 minutes this season, appearing in 51 games.

The resident old man of KU basketball alumni, 37-year old Nick Collison might not check in for Oklahoma City until a game is all but decided. Not that you would ever hear the 14th-year forward complain.

A favorite of OKC fans and superstar guard Russell Westbrook alike, Collison (5.0 minutes a game this season) remains with the organization for leadership and stability in the locker room. He’ll primarily watch from the bench and interject knowledge when needed as the Thunder take on Utah in the first round.

Whether it comes against the Jazz or later in the playoffs, if it gets to a point where OKC is on the brink of elimination at home, don’t be surprised to see Collison play out the final minutes on the floor. It could be a farewell appearance, as he plans to contemplate retirement once the Thunder’s season ends.

Love me some Tarik Black. Would love to see him get regular minutes somewhere.