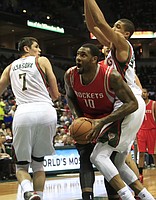 Houston Rockets forward Tarik Black, center, drives to the basket against the defense of Milwaukee Bucks guard Giannis Antetokounmpo, right, during the first half of an NBA basketball game Saturday, Nov. 29, 2014, in Milwaukee. (AP Photo/Darren Hauck)

Basketball isn’t just a game in the NBA, it’s also a monumental business — even around the holidays.

Rookie Tarik Black learned that the hard way when Houston waived the center from Kansas the day after Christmas.

Yahoo’s Adrian Wojnarowski reported the Rockets had to clear a roster spot in order to sign free agent Josh Smith, himself waived days ago by Detroit. Black ended up being the casualty when Houston (20-7) made a title-chasing move.

ROSTER UPDATE: In order to maintain a roster of 15 players, the team has requested waivers on Tarik Black pic.twitter.com/rhBVy52RVz

Undrafted after one year at KU, Black earned himself a Rockets uniform and playing time through hard work. Coach Kevin McHale, in a story from CBS Houston’s Howard Chen, earlier this month pointed to Black’s core values and attitude when talking about how the (allegedly) 6-foot-11 center got a shot in the NBA after all those teams passed on him in the draft.

“That’s what got my attention right away,” McHale said. “I was just very impressed with the kid as far as his willingness to come to work every day. (He) had just a great can-do attitude. Whatever you asked him to do, he did. That went a long way.”

Black started 12 of the 25 games he played for the Rockets, contributing major minutes when they needed him fill in due to injuries and the like. He was averaging 4.2 points and 5.1 rebounds in 15.7 minutes, and shooting .542 from the floor.

The 23-year-old big man’s best performance came Dec. 3 against his hometown Memphis Grizzlies — the team he would’ve faced Friday night with the Rockets.

Just before tonight's game in his hometown. RT @WojYahooNBA: The Rockets have waived Tarik Black to clear a roster spot for Josh Smith.

Black put up a double-double in Houston against the Grizzlies, going for 10 points and 11 rebounds in 23 minutes. What’s more, he put in serious work on the offensive glass, with nine boards on that end of the floor, while playing against the likes of Zach Randolph and Marc Gasol.

Following that performance, Black told Chen he has learned much about the NBA through his on-the-court experience.

That quote is an example of what McHale spoke of, and other NBA teams have not only seen evidence Black can contribute, they also have heard good things about him. So even though the rookie had played single-digit minutes in four of Houston’s last five games, he could wind up with another franchise. And soon.

Wojnarowski reported more than one NBA team told him they have interest in claiming Black off waivers.

— Keep up with the production of all the 'Hawks in the NBA daily at KUsports.com.

All the best, Tarik! You will get into a team that needs you! Great work getting recognized!

The Timberwolves could always use more help. I'm sure Wiggins would love to have Tarik back on his team.

Tarik is a great player, he would be a strong center or big power forward. He rebounds the ball intensely and can score inside with his big frame. Give him a chance and he'll prove his worth like in Houston

One of my all-time favorite Jayhawks. A shame he couldn't stay in Houston, but I'm confident that he'll wind up in a good place for him. The Warriors could use him right now, given their big men that are hurt.

I would cry if he ends up in Dallas.

Hope he gets picked back up ASAP.

It's ashame he got waived, but there's only so many NBA roster spots. Going from an UFA to getting minutes on a roster (a good one at that) bodes well for him. It wouldnt be a shock if he gets a chance elsewhere. Best of luck to him!