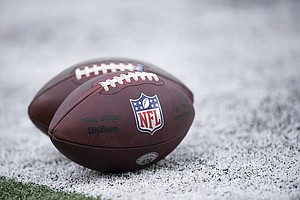 A football on the field before an NFL game in Cincinnati. by Zach Bolinger/Associated Press

Malik Clark has become the most recent Kansas football player to begin a professional career as he has accepted a tryout offer from the Kansas City Chiefs.

Clark, the Jayhawks' longtime starting left guard, was a sixth-year senior last season. He joined the team in 2016 and appeared in two games, redshirted in 2017 and then started throughout his final four seasons.

He measured 6-foot-3 and 320 pounds at Kansas' pro day on March 9, when he said he believed everything "went smooth."

Defensive end Kyron Johnson was chosen by the Philadelphia Eagles in the sixth round of the NFL Draft, which ended Saturday. Wide receiver Kwamie Lassiter II went undrafted but signed a contract with the Cincinnati Bengals, and cornerback Jeremy Webb will join the New York Jets for a tryout at their rookie camp.

Each team will hold a rookie camp, which last three days, and the Chiefs' will run from Saturday through Monday. Draft picks and undrafted players who signed a contract will join those already on the team on futures contracts and up to two dozen players who are invited to try out for on-field drills, film sessions and other orientation seminars during the camp.

Teams will sign only a handful of players on tryout agreements this weekend, though it's not the only opportunity for them to try to land a contract. Teams are also able to invite players in for tryouts during training camp, which begins in mid-July, and throughout the season.

Being asked to tryout does not mean a player cannot one day achieve success. Among those who began their NFL years through tryouts are wide receivers Adam Thielen and Adam Humphries and cornerbacks Malcolm Butler and Chris Harris Jr.

Chris was so good and far too under appreciated his last season.

Good to hear of Malik’s opportunity.

I get a "Forbidden 403" when I try to upvote Dirk's comment. So, consider this my upvote.