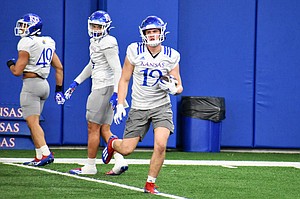 Kansas linebacker Gavin Potter was participating in practice on Tuesday after missing at least the first three sessions last week for unspecified reasons.

Potter, who will be a senior in the fall, started 10 of 11 games for the Jayhawks last season and finished with 78 tackles, including five for a loss, as well as one sack and one interception that he returned for a touchdown.

Coach Lance Leipold said last week, after the second spring practice, that Potter is "not with us at this moment" but declined to elaborate further.

"I'm just happy he's here," defensive coordinator Brian Borland said Tuesday. "He was one of our leading performers last year. I thought he really improved as the year went on. He just had to work through a couple things and did. He's back and we love him. He's made that decision to stick with us here and I'm glad he did. I think it's in his best interests — and our best interests, quite honestly. So, we just put that in the rearview mirror. We look forward. We're happy he's here and we look forward to what he's going to do here for us in the future."

Potter has started 19 of the 31 games in which he has played since he was a freshman and played the most snaps of any linebacker last season.

He had arguably his best performance at Kansas in the season-ending 34-28 home loss to West Virginia on Nov. 27. He had 10 tackles and recovered a fumble, and he returned an interception 28 yards for a touchdown in the third quarter to help tie the score at 21. Potter also had a pair of third-down tackles that forced the Mountaineers to attempt field goals.

The Jayhawks opened spring practice on Feb. 28 and held sessions on March 1, March 3 and March 5. It is unclear whether Potter participated in the fourth spring practice, which was not open to reporters.

Three of the four linebackers who earned at least one start last season — Potter, Rich Miller and Taiwan Berryhill — are still on the team. (Nate Betts, who was a senior last season, has departed.) The Jayhawks also added a pair of transfers who are expected to be significant contributors, if not starters, in Eriq Gilyard and Craig Young.

Good to hear that Gavin is with the team. Definitely agreeing with Borland.

Isn’t Young a possibility for nickel back or even safety? Would he be similar to the Simmons that got away to Clemson?

Gilyard is more of a run plugging MLB, yes?

Any news on Jr Day last Saturday? Even just a participant list? Is there another one scheduled?

Thanks for the coverage.

Gavin is in loose shorts, no pads, in the photo, so doesn’t that gives some indication of the number of practices?