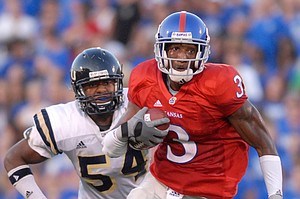 Kansas' Aqib Talib is tailed by FIU linebacker Quentin Newman during a game at Kansas Memorial Stadium on Sept. 22, 2007. by Nick Krug

Former Kansas standout Aqib Talib will serve as one of the analysts for the NFL's "Thursday Night Football," which is moving to Amazon Prime this season.

Talib, the 12-year NFL veteran defensive back who retired in 2020 and began working for Fox Sports, will serve as a pregame, halftime and postgame analyst, the service announced Thursday.

Talib and former KU cornerback Chris Harris both started for the Jayhawks in the Orange Bowl season and for the Broncos in Super Bowl 50.

Talib played for the Jayhawks from 2004-07 and was named the most valuable player of the Orange Bowl after the 2007 season. He was selected by the Tampa Bay Buccaneers with the 20th pick in the 2008 NFL Draft.

This is going to be fun! 👀 @AqibTalib21 is coming to Thursday Night Football 🔥#TNFonPrime | Only on @PrimeVideo pic.twitter.com/Pe0YgNBYHa

by NFL On Prime Video