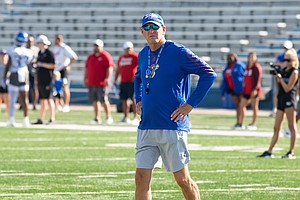 When Kansas redshirt sophomores Jared Casey and wide receiver Quentin Skinner were awarded scholarships by coach Lance Leipold in the spring, they were told of the decisions in straightforward conversations without hoopla and pizzazz.

Casey, a tight end, received word of his in Leipold's office in late April. Skinner, a wide receiver, was told of his via phone call after he had already left campus for the summer.

"I think (offensive coordinator) Andy Kotelnicki, he's the only one that has (Casey's offer) on film, so you'd have to talk to him to see what his price is to release that," Leipold joked.

These days, social media is full of video clips of walk-ons receiving scholarships — many of them designed as if they're entries in a perpetual game of one-upsmanship. It happens especially often at this time of the year, the weeks leading up to the start of the season, when coaches decide to reward hard-working players for their commitment and performance in recent years.

Auburn coach Bryan Harsin awarded a scholarship to linebacker Jake Levant during Saturday's open practice by tricking him into thinking he had made a mistake during a special teams drill. Maryland coach Mike Locksley gave scholarships to punters Anthony Pecorella and Colton Spangler during the Baltimore Ravens' preseason game against the Tennessee Titans on Aug. 11.

UConn coach Jim Mora gave scholarships to linebacker John Bechtle and wide receiver Jacob Flynn at the end of a recent practice by singling them out and saying, "Y'all know what's about to happen." South Carolina coach Shane Beamer also presented a scholarship to wide receiver Payton Mangrum during a team huddle, leading to cheers and hugs.

And then there are Leipold's understated conversations with Casey and Skinner. Casey said he was able to speak to his parents via FaceTime as part of the conversation with Leipold, and Skinner called his mother and sister into the room once he got off the phone — his father was at work — and they all started crying.

But that's it. There was no discussion of either player receiving scholarships for more than three months until Casey was asked about it after a recent training camp practice. Leipold, when asked days later about Casey, used the question to share Skinner's news.

Leipold said his approach to those conversations is born out of the desire to keep the moment special for the player involved and to avoid any kind of uncomfortable emotions from others that may result from them.

"When young men earn scholarships like that, it's twofold for me," Leipold said. "One, I think that's really neat and well deserving. I think I've tried to keep it in a good spot. But I also know there's a lot of other walk-ons that work extremely hard in our program that could be on the cusp or whatever, and I try to keep that in the back of my mind as well when we do that.

"The other part is, I think sometimes that the awarding of a scholarship has taken away from the individual and it becomes a scripted act of some sort. That's my opinion. And everybody can do what they want to do, but it's not about how the guy gets it and who told them and all of that. It puts more light on other people than it does the young man who really got it, in my estimation, many times. So, that's why we didn't have a bunch of cameras there when we did it and that's kind of where we went."

One thing Leipold has shown during his 16 months as the Jayhawks' coach is that he does care about his players' well-being. That's a tone he set immediately upon his hiring in April 2021, when he asked many of them to compile a list of attributes and traits that they wanted from their coach — and then set about trying to adapt the ones he didn't already embody.

Perhaps he's right, that the awarding of a scholarship has become a cliche, much like high school seniors' signing day ceremonies and the elaborate hat-in-a-bag-in-a-box dance that died off a decade ago (and has since been replaced by intricate social media videos).

But even if they are a cliche, they still provide a measure of much-needed warmth and excitement in what has steadily become a cutthroat, no-nonsense business. Viewers almost certainly have not heard of the players involved, especially if they're a fan of another school, yet it's easy for anyone watching to get caught up in the emotion. And after all, at their core, aren't college sports supposed to be fun?

Mora was a walk-on defensive back at Washington in the early 1980s before he was put on scholarship. When asked Tuesday about the decision to share the moment with Bechtle and Flynn via social media, he said he wanted to do so because it showed "the raw joy that our players had."

"I think it gives everyone hope," Mora said. "I think it gives every walk-on on your team hope that if they work hard, if they have a good attitude, if they just stick with it when they work hard, because it is not easy being a walk-on ... emotionally, they know, 'Man, these guys have a scholarship and I'm a walk-on, and I think that's hard.' When you reward them, I think that uplifts the whole team."

That's similar to what Kansas senior tight end Mason Fairchild, who is on scholarship, said when he found out Casey was awarded a scholarship: "We've got a lot of guys that are in that situation right now that were in the situation he was in, and they're working their tails off, too, so I'm praying for them and hoping they can be put on scholarship eventually."

Ultimately, what's important is not how it happened, just that it did happen. Skinner, who played more special teams snaps than any of his teammates last season, certainly didn't mind.

To me, this is like Coach at the end of the ut game. It was over. There would be no celebration penalties or anything like that but he was running around as he was thinking next play; we gotta get ready to kick off. Or there’s an interview that asked him with all the championships he won, errr, his teams have won, how many times has he been carried off on their shoulders? Never. That’s not Coach. But you can bet all the players know that he cares about them, appreciates their effort, and will still challenge them to do more; be more.

If you want a feel good video promo, check out the KU Athletics website. There is a great 4 part series about the team and the work they’ve been doing. I think it’s by former player Micah Brown. I don’t recall any publicity for it. Really encouraging and that was even before some of the more recent progress.

And in completely unrelated news, I found this page of pronunciations on the KU Athletics website:

Getting ready for the game.

"Kansas loses out?" from the story title appears to be constructive criticism of Leipold's decision to privatize the awarding of scholarships to walk ons.

I question who exactly "Kansas" is, maybe "Social Media loses out" might be more appropriate terminology.

"In Lance I Trust"! Rock Chalk!

I think it's fair to say that both Kansas and social media "lose out" on those moments because they serve as feel good moments for people to watch and also as publicity for the school and the program. Sports are in a slow period during the summer and videos of walk-ons receiving scholarships naturally draw lots of coverage. Sharing a video of Casey getting the news and the team celebrating with him would put the KU name out there in a positive light and his moment would be packaged by ESPN and others with his story and highlights of the Texas game and put that back in front of recruits and fans.

That being said, Leipold was quick to point out in his comments that he did not receive a scholarship solely for that play and that catch. It was a culmination of working hard and doing the right things and being a good teammate that put him in a position to earn a scholarship, so that highlight would potentially diminish those other things. Ultimately, there is no right or wrong way to go about this sort of thing, and I'll trust Coach Leipold to know his team and do what is best for the program. Can't wait for next Friday!

It also seems worth pointing out that it was only then that anyone found out about Skinner getting a scholarship. No one even asked. Does anyone think that espn would have provided coverage of that?

Coach also referenced others not receiving scholarships though they too were working hard. Maybe a circus act would have motivated them. The major thing they have talked about since they got here was building culture. It doesn’t seem like the circus act fits the culture they seem to be building. What they have been talking about over and over again; of consistently straining to improve.

I think an article last fall was about looking for consistency over flash. It seems they’ve stayed true to their words.

My neice actually showed your comment to her basketball and football head coaches. It got huge laughs. The basketball coach wanted to know which of his assitants felt quasi!

Dirk your dream came true, you were talked about in a div 1 coaches meeting. You are now famous, kind of. Not sure in the way you wanted but you made it buddy.

We will be lucky to keep Coach L. 2-3 years tops once we start winning.