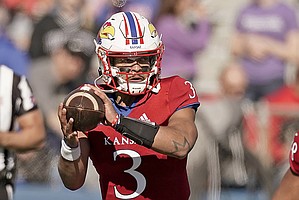 Kansas quarterback Miles Kendrick looks to pass during the first half of a game against Kansas State on Nov. 6, 2021, in Lawrence, Kan. by Charlie Riedel/Associated Press

The Lobos open their season at home on Sept. 3 against Maine, followed by consecutive Mountain West home games against Boise State and UTEP.

"Miles has shown great leadership and he has really taken to that role," Gonzales said. "He has been able to move the offense, and while in August I was a little worried if we would be able to run our whole offense because of his past injury, he has shown to myself and the team and staff that he is 100% and ready to go. I'm excited to see what he can do for us offensively."

Kendrick left the Nov. 6 loss to Kansas State with a leg injury and did not play again for the Jayhawks. He decided to use the extra year of eligibility afforded to him at the start of the COVID-19 pandemic and transferred to New Mexico in an attempt to compete to start, though he missed all of the spring practice window as he recovered from the injury.

He completed 61.1% of his passes while at Kansas for 853 yards, nine touchdowns and six interceptions, and he ran 71 times for 101 yards and one touchdown.

"That will be a great honor," Kendrick told reporters Saturday when he was asked how he'd respond to being named the starter. "That's what I set out to accomplish coming to this school. But the biggest thing is being able to push the guys in the quarterback room. Support those guys. Spread knowledge in that room. Help each other get better and grow each and every day."

It's the second consecutive season in which the Lobos will turn to a transfer to be their Week 1 starting quarterback. Terry Wilson, who played at Kentucky, opened last season in that role.

Kansas will turn to junior Jalon Daniels as its starting quarterback for the season opener Sept. 2 against Tennessee Tech. Jason Bean, who beat out Daniels and Kendrick to be the starter a year ago, will serve as Daniels' backup.

Bean started the first nine games for the Jayhawks and left the Kansas State game with an injury that opened an opportunity for Kendrick. But Kendrick left the game not too long thereafter and Daniels stepped in.

With Bean and Kendrick unavailable a week later, Daniels was named the starter for the game at Texas, which Kansas surprisingly won 57-56 in overtime. Daniels, who was expected to redshirt the season, chose to forgo that opportunity and finished the final two games in that role.

Not a more deserving guy than Miles Kendrick and certainly wish him nothing but the best this year.

Absolutely. I’m a Kendrick fan. Apparently he doesn’t have the arm strength of others, and he always seemed to get injured just as he got his opportunity to start.

In an article last fall/November, Jalon credited Miles with mentoring him and developing his leadership that was noticeably better.

Love that Kendrick is starting at New Mexico...but...go Air Force!!!