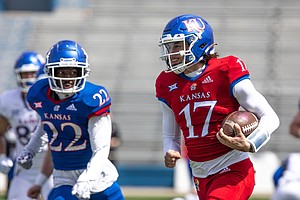 It was an enticing thought in the early winter, one conceived in the wake of Jalon Daniels' emergence over Kansas' final three games last season.

Could Jason Bean find a home on the field at a position other than quarterback?

Bean has attributes that stand out among his teammates and beyond those required at his position. The redshirt senior is widely considered one of the Jayhawks' fastest players, at 6-foot-3 and 200 pounds would be a large target as a receiver, and last season ran for 100 yards and two touchdowns at Coastal Carolina.

Offensive coordinator Andy Kotelnicki has vowed throughout training camp that the Jayhawks will find ways to get their best players on the field this season, which begins Sept. 2 at home against Tennessee Tech. And while Bean may share the field with Daniels for a few plays per game, a full-time move was never going to happen.

The reason? Kansas needs Bean as a quarterback.

"We like to have two good quarterbacks, do you know what I mean?" Kotelnicki said Wednesday. "I don't know if you're insinuating, 'Hey, because of his speed, could he be a receiver? Could he take handoffs, and stuff like that?' Sure, he could, but ... every rep he takes out there is a rep that he loses playing the quarterback position."

Bean, a transfer from North Texas, held off Daniels and Miles Kendrick a year ago to be named the Jayhawks' Week 1 starter. He held that role for nine games until an injury prior to the Nov. 13 game at Texas opened the door for Daniels, who led Kansas to a surprising overtime victory in that game and played well enough to rejuvenate the offense in a pair of season-ending defeats.

When Bean returned after missing the game against the Longhorns, Kotelnicki and coach Lance Leipold used him in different ways, including having him line up in the backfield on three occasions in the loss to TCU. Leipold said at the time that they did so to get "one of our fastest players on the field." Mostly, he was a decoy; he had just one carry for 1 yard in that game.

Kotelnicki has been adamant that a team's personnel should dictate what it does. It would be fruitless, for example, for the Jayhawks to run a spread offense if they have plenty of quality tight ends and fullbacks — which is what former coach Les Miles did. That, clearly, didn't work.

"As I've said before, we are not afraid to use multiple personnel groupings any way that we can, however many tight ends, receivers, running backs, quarterbacks on the field necessary to help us move the ball effectively down the field," Kotelnicki said. "But, maybe to your question specifically about individual skill sets, the system is the players."

That may end up being most evident this season at running back. Kansas has four players at the position who are expected to contribute significantly, and a fifth, redshirt junior Torry Locklin, was used as a running back and a wide receiver last season.

Multiple two- and three-back sets are expected; Kotelnicki even floated the idea of having four running backs on the field at once, though it seemed more like he was illustrating a point about versatility and not something he'd practically deploy.

"You have five running backs out there," Leipold said, speaking theoretically, "you better make sure some can block and you got to have some that can have some type of vertical receiving ability as well as some precision in route running, and things like that aren't always just natural. And then you have to find ways to get these things practice."

That's where moving Bean elsewhere, for any amount of time, causes issues. Bean, according to his teammates and coaches, has had some of his best practices in recent weeks — especially with regard to his decision-making and accuracy, Leipold said. Having him take snaps at other positions in practice could hinder that growth, making him less ready for any situation in which he'd have to replace Daniels. (And remember, Daniels underwent offseason ankle surgery and missed a portion of spring practice.)

If Kansas knew it could reliably turn in a time of need to one of Bean's backups, redshirt freshman Ben Easters or freshman Ethan Vasko, the conversation would be different. So, too, would it be if Bean was in his fourth or fifth season in the offense, not his second, or if Kansas' wide receivers didn't need so many reps as they prepare for more significant roles.

"We want to make sure we're doing a good job and we're always flexible enough to be able to have certain packages grow or expand based off the ability of our players," Kotelnicki said.

That doesn't mean Bean won't take a snap or two out wide or in the backfield in games. But Bean's best ability, and his greatest value, is as a quarterback — no matter how minor that role may end up being.

KU QB on his improvement & comfort level entering Year 2 with the Jayhawks by KUsports.com

Jason Bean has earned my respect for not letting his loss of the starting role affect him negatively. He buckled down and became a better player, a good teammate and role model. I love having guys like this on our team. Thank you, Jason Bean, for all the hard work you have put in on behalf of the team and KU.

Fortunately, the nfl also has plenty of examples of college QBs with athletic ability that transitioned to WR. Learning the O should help him in that regard as well. I think I heard Coach mention it - didn’t read it, Kwamie has received praise from the Bengals because of the technical understandings he gained from this staff. Not starting at QB doesn’t preclude Jason from having a professional future. It does show great personal character, and the culture Coach is trying to develop, to continue to develop himself. I wouldn’t be surprised to hear this often during the season as the team’s collective improvement leads to greater success/COTY.

This is a very good article, the only title change I recommend is "will be" instead of "may be".

The KU coaching staff has to keep Jason Bean at quarterback. In fact, Jason Bean and Jalon Daniels are essentially equal in talent.

The only reason Daniels will be the starter is the momentum he created the last 3 games of the season.

Jalon and Jason are 1A and 1B in my book. I predict they will both play significant minutes at QB this fall.

Edward - There is about a 10% difference in completions between the two. It was a significant improvement for Jalon from the beginning to end of last year. There are some reports that Jason has improved his accuracy since last year but no live data to support it. If he is at 70% now, then he would have an advantage because of his speed.

While different players, it is rather a luxury to have 2 capable QBs, after too many years of the competition dragging on just to find one.