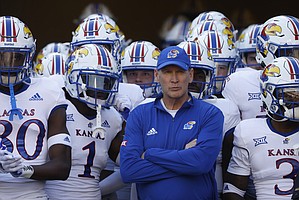 Kansas head coach Lance Leipold stands with his team before facing TCU on Nov. 20, 2021, in Fort Worth, Texas. by Ron Jenkins/Associated Press

Calvin chose the Jayhawks over Vanderbilt and Liberty, which he identified as his finalists on July 18. He had been recruited heavily by Kansas defensive tackles coach Jim Panagos, was offered a scholarship by the Jayhawks in early June and took an official visit to campus on June 17.

Tulane, FIU and Marshall are among the schools that have also offered Calvin a scholarship. He also plays basketball and had been hearing from Division I schools before turning to football.

Calvin, who plays at Gibbs High and is coached by former Florida standout and nine-year NFL veteran Louis Murphy, is the third defensive lineman to commit to the Jayhawks as part of their class of 2023, which now has eight members. Defensive end Tony Terry Jr., from Jackson, Missouri, made his commitment on June 14 and defensive tackle Blake Herold, from Shenandoah, Iowa, committed to Kansas last week.

Another defensive tackle, Jarra "Bear" Anderson, from Katy, Texas, took an official visit to Kansas alongside Calvin. He canceled visits to Colorado and Washington State after he returned from Kansas and intended to announce his commitment in early July.

Calvin’s a big boy. DTs are the soul of quality teams, and nice to have one that already has size.

I think I saw video of him and he can definitely hoop too.

Congratulations and welcome to The Hill!