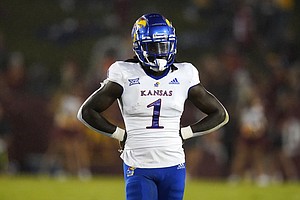 Kansas safety Kenny Logan Jr. stands on the field during the second half of a game against Iowa State on Oct. 2, 2021, in Ames, Iowa. by Charlie Neibergall/Associated Press

Kansas safety Kenny Logan Jr. was named to yet another watch list on Monday as he was listed as one of 90 preseason candidates for the Chuck Bednarik Award.

Logan, a senior, has already been named as a candidate for the Jim Thorpe Award, which recognizes the nation's top defensive back, and the Hornung Award, which is given to the most versatile player.

He finished last season with 113 tackles, the most by any safety in a Power 5 conference and the most by any Big 12 player. He also forced two fumbles, made one interception and broke up six passes while playing in all 12 games for the Jayhawks.

Kansas will open its preseason training camp Tuesday, one month before the season opener against Tennessee Tech.

Don't count me surprised. Mr. Logan is obviously the real deal. However, one can only hope that the number of tackles he makes this coming season is down. “…113 tackles, the most by any safety in a Power 5 conference and the most by any Big 12 player.” Why? Those inflated numbers are indicative of other problems with the defense, especially at linebacker position last year. The goal of Leipold and his staff must be to improve the defensive line and linebacker play, so Mr. Logan and the other corners/safeties are not required to make so many game saving tackles and can focus on pass coverage. Rock Chalk.

The goal been (past tense) and must (continue to) be improvement to the rest of the D.

The D-line isn’t substantially changed except for the growth of the young DTs, and replacement of Johnson.

Huge change in the LBs. Whether last year’s starters start this year is not nearly as significant to the overall team performance as them not needing to play virtually every snap. The DBs should have more quality depth as well.

Gotta keep developing, but the staff has already done a lot.

Zac - Is there an advanced staff on DB performance similar to the PFF grades that have been discussed for the OL? It seems like we’ve upgraded the D in particular, but I wonder if there’s a more objective measure.