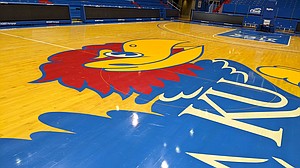 The Kansas Jayhawks logo as seen at center court at Allen Fieldhouse on March 6, 2022. by Zac Boyer

The Kansas women's basketball team received its first commitment from a player in the Class of 2023 when Laia Conesa, a guard from Barcelona, Spain, accepted a scholarship offer late last week.

Conesa, who is 5-foot-10, represented Spain in the FIBA Under-16 Women's European Challengers in August. She started all five games and averaged seven points, 3.6 rebounds and three assists while shooting 34.1% in 20.6 minutes as Spain finished 5-0.

She is expected to also compete for her country in the Under-17 Women's Basketball World Cup in Hungary in July.

Conesa plays at one of Spain's top basketball academies, Segle XXI, which competes in Liga Femenina 2, Spain's second-tier women's basketball league. Through 23 games this season, she is averaging 5.3 points, 3.7 rebounds and 1.3 assists in 20.1 minutes per game.

Given the extra year of eligibility granted to players by the NCAA at the start of the COVID-19 pandemic, the Jayhawks could add anywhere from one to four more players alongside Conesa for the 2023-24 season.

They also added Wyvette Mayberry, a transfer from Tulsa, earlier this week. Mayberry, a 5-foot-7 combo guard, will be a junior in the fall.

Welcome, Laia! Looks like she has a nice, well-balanced game. And, at 5'10" (and, maybe still growing), she could develop into a real force. Another nice get for KU.