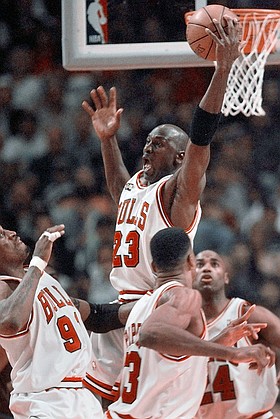 FILE - In this June 10, 1998, file photo, Cicago Bulls' Michael Jordan reaches high above teammates Dennis Rodman, left, Scottie Pippen, and Scott Burrell (24) for a rebound against the Utah Jazz in the second half of Game 4 in the NBA Finals in Chicago. Jordan described his final NBA championship season with the Chicago Bulls as a “trying year.” “We were all trying to enjoy that year knowing it was coming to an end,” Jordan told Good Morning America on Thursday, April 16, 2020. (AP Photo/Michael S. Green, File)