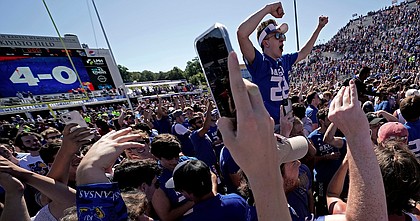 The Kansas football team’s improbable 4-0 start has landed the Jayhawks on the doorstep of the Associated Press Top 25 rankings.

KU received 125 votes in this week's poll, which was released on Sunday morning, after knocking off previously unbeaten Duke on Saturday, 35-27, at David Booth Kansas Memorial Stadium in front of a sellout crowd.

That was the most votes for any team not in the poll and essentially has the Jayhawks ranked No. 26 in the nation entering Week 5. Kansas State, which knocked off No. 6 Oklahoma on Saturday night, was ranked No. 25 in the poll on Sunday, with 166 votes.

KU also sits on the brink of being ranked in the USA Today coaches poll. The Jayhawks were the second-highest team receiving votes in that poll on Sunday.

The Jayhawks' win over Duke, which featured a career day from quarterback Jalon Daniels, pushed Kansas past the three-win plateau in a single season for the first time in the post-Mark Mangino era.

That it came in just the fourth game of the season and head coach Lance Leipold 16th game in charge of the program. 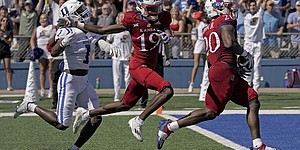 The buzz and excitement around Lawrence — and, really, throughout college football — over KU’s stellar start has demonstrated that Kansas football can be relevant again.

But it’s not that different from what the coaches and KU players expected after an offseason of hard work, reshaping the roster and staunch determination to get things started down the right path again.

Asked after Saturday’s win what he would have said if someone had told him before the season that KU would be 4-0 this season, Daniels started straight ahead and said, “I wouldn’t say that I would be surprised.” He also said it feels “amazing.”

Asked after Saturday’s win what being ranked would mean to the program, KU receiver Luke Grimm said cracking the rankings would not change anything.

“It doesn’t,” Grimm said. “We’re the same team that we were in Week 0. We’re going be physical, disciplined. We’re going to do our job to the best of our ability and whatever happens, happens. We’re going to trust that.”

Next up, Kansas will play host to Iowa State at 2:30 p.m. next Saturday at Memorial Stadium.

The game will be shown on ESPN2 and the oddsmakers have made the Jayhawks an early 3.5-point underdog in that game against the 3-1 Cyclones, who lost at home to No. 17 Baylor on Saturday.

After that loss and No. 6 Oklahoma’s home loss to Kansas State on Saturday night, KU stood as the only 4-0 team remaining in the Big 12 Conference.

TCU and Oklahoma State are both 3-0 but both of those programs have yet to play a conference game.

KU defensive back Mello Dotson talks about Saturday’s environment & what’s next by KUsports.com

Kansas not being ranked is BS

I would imagine that being 3.5 point underdogs at HOME will be motivation to our guys. Hopefully it puts a chip on their shoulder. Should be a great game. Iowa State's defensive has been impressive but their QB has given up 5 interceptions this year while only getting 10 touchdowns.

So KSU is ranked one spot in front of us. It's not like we needed any motivation, but it is nice to know we have some now.

BTW I'd take Daniels over Martinez any day based on consistency alone.

Plus, Martiniez' history is lots of turnovers, both interceptions and late-game fumbles. The OU game is the first time he has let it rip on long throws, as a wildkitty. He'll need to keep up the long throws to win some games but that also exposes him to his interception bugaboo. Once he gets bit by the pick a few titimes I expect him to return to his early-season timidity and ineffectiveness. Just a matter of how soon.

K-State beat the 6th ranked team on the road. They deserve to be ranked.

KSU also crapped their pants against Tulane. They do NOT deserve to be ranked.

Bryce they lost to Tulane by a touchdown. Tulane is 3-1.

When you beat a top 10 team on their field, two things had to happen. One, OU was ranked too high. Two KSU played really well. Those kind of things get you noticed by voters.

Yes, significant gains have been made in 2022.

But, Writers will desire to see how Jayhawks fare against Iowa State this coming weekend.

K-State did a great job of beating Sooners in Norman. Looks more like Cats took Tulane for granted and HC Fritz & staff made HC Klieman and staff pay for such oversight.

I believe I heard that same logic about us needing to show how we do against unbeaten Duke, so that argument holds no water. I suspect if one more team had dropped out of the polls and the two Kansas teams were ranked 24 and 25 we'd complain a lot less. None if we were 24, some if ksu was 24.

Actually it does hold water. Duke was a win, but they were coming for us at the end of that game. Another few minutes for them and we would have gone to OT.

Comeback to reality, ifs, or maybe's do not count anywhere in the standings.

The kitties also lost to Tulane.

That being said, if you consider the last 7 games, 5-2 is great, but we have only played bottom half P5 teams. Houston was ranked to start the year based on their performance last year but hasn’t played like it this year.

Is ISU a top half team? They’re at least middling.

TCU, like WVU, will be another barometer game to see who’s improved. Though they’re 3-0, they’re still bottom half imo.

OU will be the first top half team (I think. They still haven’t played anyone this year, and running on heritage hype.) we’ve played in a year. I am super excited about the amazing job by all the players and staff. Still a long ways to go.

At least the ut hype seems to be squelched for the year (hopefully).

And while I understand conferences, there are a few (Houston, Cincinnati, …) that are misplaced imo.

The one thing I noticed yesterday is coming out in the 3rd quarter, our defense made it clear that there were some adjustments and they were playing harder and hitting harder. We had some really bad penalties in the second half such as the late hit on Duke's QB and one of the PI's(which may have been smart to prevent the big play). The last PI was a bad call, but the boys acted like men and overcame it. By the way, taking the holding penalty is not what hurt us. It was the lat hit on the QB that did. That would have been "ball game" if Phelps had just not done that, but he's human and I won't hold it against him. There was some jawing going on out there and the emotions might have gotten the best of a few guys a couple of times which happens with young men, and even men my age.

LL strongly implied (in the after-game media session) that when he watched the replay he thought the QB was "still on the playing field" and thus it was NOT a late hit.

Mid-season rankings really don't matter. What matters is the rankings at the end of the year, and Kansas can get there by beating beatable teams. ISU is one of those beatable teams. Should be another good game. Let's go!

However, with that being said...

As you all know...I am a huge fan of this team...but lets be honest...we are not a Top 25 team yet...before yesterday I thought we were...but after what I saw against Duke...a team that barely beat Northwestern(look at their record and opp) and smashed a couple of cupcakes on their home field...they came over here and showed us that we just aren't very good yet and if we do not improve quickly...yesterday might be our last hurrah for this season...all that said...regardless of what happens ...I will still consider the season a success and I will be happy. Duke exposed some things that will not be easily fixed on defense...there were also glaring strategic mistakes which could be from all the hype and attention we received last week...the microscope takes some getting use to...so there might have been a couple mental mistakes...and as the season goes on ...depth will be a major issue for us...not necessarily because of injuries...but from wear and tear and everyone being nicked in some way...then it comes down to buy in and want to...then we will see what this team is really made of...tons of improvement need to made in all phases and mental makeup will be the single most critical thing...Good Luck ... I believe in you guys!!!!

I understand the interest in being ranked. But the Kansas fan should be much more concerned about sustained demonstration of good play. If we accomplish that then the rankings will take care of themselves...eventually.

I agree that rankings are not the most important thing for KU at this point in time, and that we should be focused on winning the games we should and competing in the rest and letting the rankings take care of themselves. Outside of the top 4 competing for a playoff spot, the rankings are for the fans to argue about and the media to get clicks when they talk about who they voted for and who was snubbed.

That being said, I keep seeing articles reference where we have the longest drought outside the rankings of any power five team and ending that would be great. Similar to not having to see our record conference road game losing streak mentioned during every game before we beat Texas last year, getting into the polls just one week would reset that counter and eliminate the negative talking point on broadcasts. Also, getting ranked gives the coaching staff another tangible indication of progress to highlight when they're recruiting.

I would like to commend all those who posted!

We made it through, so far, without any "P o l i tic s" being mentioned.

the true gauge of fan interest

1] The thought that KU could potentially qualify for a bowl a month before daylight savings is mind blowing.

4] Aw, come on Brad W...live in the moment. Right now we are tied with Bama and Georgia for the best record in Division One!!!!!

Better this way. Ranking doesn’t matter this week. Keep chopping wood ( and let the chips stay on our shoulder).