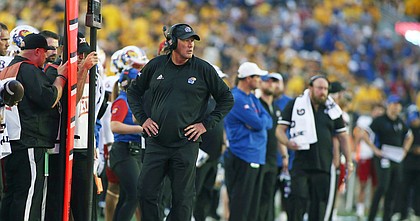 Although the scoreboard showed a Kansas victory at the end of each of the last two games, KU football coach Lance Leipold knows the Jayhawks can’t expect that to continue if they don’t find a way to start faster.

Down 14-0 before they could blink against West Virginia and Houston, KU managed to crawl out of both early deficits to win the two road games.

But Leipold, his coaching staff and many of his players have been around long enough to know that getting down early like that is not a recipe for success.

“We need to start better; there’s no doubt about it,” Leipold said this week. “Because one of these times you’re not going to rebound from it and you can’t live that way all the time.”

Asked if he could pinpoint why the Jayhawks have started slow in recent weeks, Leipold said it likely was the result of several factors. He listed confidence and a lack of aggressive play early as two of them.

When asked the same question, defensive coordinator Brian Borland said he had not been able to put his finger on the issue.

“I don’t know,” Borland said. “I wish I did. I know we can’t keep functioning that way.”

While the eliminating the early deficits has fallen more on the shoulders of the Kansas defense, Leipold said the KU offense could do its part, as well. Against Houston, Kansas went three-and-out on the game’s first offensive series, giving Houston the ball with momentum just a couple of minutes into the game.

Still, Borland said regardless of what the offense is or is not doing, it’s the defense’s job to keep opponents from scoring and he knows the Jayhawks need to do a better job of that in the first quarter.

“We’re trying to think about ways (to identify) what can we do in practice to help ourselves,” Borland said. “And, to me, it’s more attention to detail all the time.”

One thing Borland has felt good about even with the slow starts is that the Jayhawks’ overall approach and scheme has proven to be good.

“Once we’ve kind of gotten past those first couple drives, I felt like we performed better,” he said.

While that reality has been communicated to the players — both on game day and in practices — Borland said he was encouraged by what he had heard from several defensive players in the moments when the Jayhawks were trailing by 14 points early.

“I can hear them talking amongst themselves,” he said. “They know what needs to be done. They know that we can play better, we need to play better and here’s what we need to do. It’s not really adjustments; it’s execution. It’s really just settling down, playing with poise, getting your composure back and just playing.”

After two weeks on the road, the Jayhawks return home this weekend to take on unbeaten Duke at 11 a.m. Saturday at David Booth Kansas Memorial Stadium.

The game has been announced as a sellout — the first since 2019 and second in nearly 13 years — and it will be televised on FS1.

Kansas football coach Lance Leipold on the fast start & attention around the 3-0 Jayhawks by KUsports.com

Kansas quarterback Jalon Daniels talks ahead of his team's Week 4 matchup with unbeaten Duke by KUsports.com

No sacks and know the playbook by memory!!!...Good Luck you guys!!

Brad - You missed no sacks 😉

This same story has been written every season for the last 10 years or more.

However, I beleve HC LL and Staff will that issue fixed going forward....

I'm not worried about it. JD has a great arm. If he could stand in the pocket he could make any throw. I don't think our opponents respect our passing game...yet.

Nobody likes the slow starts. But it may be a blessing. These guys have dug themselves out of a 14 point hole twice in a row now. Lesser teams of the past would just get buried. These guys have proved to themselves that they can be down in a hole and still figure out a way to climb out.

I'll go out on a limb here and say that at some point this season (or maybe several points), this team may find itself in the same situation. I'd like to think their calm, cool, and confident attitude will benefit from the "Been there, done that" of the last two games.

Gotta go get the grocery shopping done, and get the grill and coolers packed. Can't wait to tailgate at a SOLD OUT KU football game! RCJH!!!

Brian - That’s similar to the BB when down to unc with the knowledge that they had the comeback against the kitties. Sidenote - I don’t think I’ve heard anyone comment that UNC went on it’s run when David went to the bench with 2 at the end of the first half. Definitely better to just run away with it.

In some ways it’s also good in that one of Coach’s comments going into the season (WVU) was what would the response be when faced with adversity. The team responded well. Hopefully the fans will also. There will be adversity.

To make matters worse, Duke has been "jump starting" out to leads early in games. If KU wins the coin toss, I would elect to receive first. The KU Offense has played really well. The KU Defense is still a work in progress, as they blend in 6 transfers. Brian Borland's "I don't know" comment was honest, but concerning. Rock Chalk!