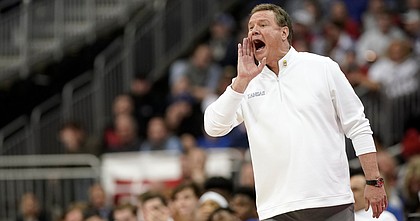 A New Year’s Eve party at Allen Fieldhouse will open the Big 12 men’s basketball schedule for the defending national champions.

The Big 12 portion of KU’s 2022-23 schedule was released on Friday morning, and Kansas is slated to open with a home game against Oklahoma State at 1 p.m. on December 31.

The Big 12 slate, which features home and away games against all nine other Big 12 teams, will start after the Jayhawks play a 12-game nonconference slate featuring games against Duke, Seton Hall, Missouri, Indiana, Harvard and a Thanksgiving-week trip to the Bahamas for the Battle4Atlantis tournament.

According to KU’s announcement of its 2022-23 schedule, 29 of KU’s 40 regular season games will be televised on ESPN Networks. That includes three Big Monday games. Three other Kansas games — home versus Oklahoma State and TCU and at Oklahoma — will be shown on CBS and every KU game will be televised in some manner.

That will mark 31 consecutive seasons during which KU has had all of its games on television. Eight of them will be on Big 12 Now via ESPN+, including conference games at West Virginia (Jan. 7), at home against Iowa State (Jan. 14) and at home against Kansas State (Jan. 31).

Since the inception of the Big 12 in 1996, Kansas has appeared in more ESPN Big Monday matchups than any other conference school. KU is 76-21 all-time on Big Monday, which includes a 46-1 mark at home and its current 39-game home winning streak one ESPN’s showcase nights.

The Jayhawks are 57-15 all-time on Big Monday under head coach Bill Self, who is getting set to start his 20th season in charge of the program.

KU’s conference slate will be interrupted by a trip to Lexington, Kentucky, for the annual SEC/Big 12 Challenge on Jan. 28, when the Jayhawks will play at Kentucky. The tipoff time and network for that game will be announced at a later date.

After opening Big 12 play at home against OSU on Dec. 31, the Jayhawks will hit the road for the two longest trips in the Big 12 in back-to-back games. KU will play at Texas Tech on Jan. 3 and at West Virginia on Jan. 7.

That finale could be fitting given that it could mark KU’s final game against Texas’ as a member of the Big 12 Conference. Many have speculated that both Oklahoma and Texas will be out of the conference and onto their new life in the SEC following the 2022-23 seasons.

First up on the Kansas schedule this season is an exhibition game against Pittsburg State on Nov. 3. After that, it’s the season opener against Omaha on Nov. 7 at Allen Fieldhouse.

Before heading to Indianapolis to take on Duke in this year’s Champions Classic on Nov. 15, KU also will play host to North Dakota State on Nov. 10 at Allen Fieldhouse.

The 2022-23 season will officially get under way early next month with the official start of practices and Late Night in the Phog, scheduled for Oct. 14.

Wow, look at us, we get more than two appearances on CBS this year! Finally getting some respect from the Tiffany Network!

What happened to the 28 Nov game with Texas Southern that was on the schedule?

It's still there on kuathletics.com and Wikipedia.

That's my point...I think it was inadvertently left off here.

I just realized something - we're not playing a "home-away-from-home" game in T-Mobile Center in Kansas City. What's up with that?