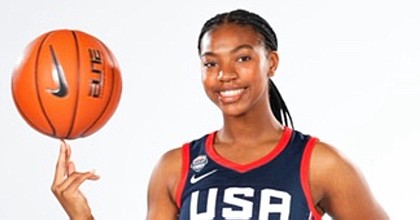 Five-star recruits on campus is certainly nothing new for the Kansas men’s basketball program, but it’s the KU women who will be hosting one of the top talents in the country this weekend.

S’Mya Nichols, a five-star prospect from nearby Shawnee Mission West High will be in town Friday and Saturday for her official visit to Kansas.

The 6-foot guard who says she can play four positions on offense and guard all five positions on defense, has been to Lawrence for many unofficial visits in the past. But this time she’s hoping to spend quality time with the players and coaches to get a better feel for how she might fit in with Brandon Schneider’s Jayhawks.

“Something that’s important to me is the culture of the team, how close they are on and off the court,” Nichols told the Journal-World this week.

Nichols, who is ranked No. 21 overall in the Class of 2023 by ESPN, is down to a final three of Kansas, Tennessee and Oklahoma. She already has made official visits to her other two finalists and she bumped her KU visit up a couple of weeks in hopes of getting the information she needs to make a final decision.

Nichols, who helped USA Basketball’s U18 national team win gold at the 2022 FIBA Americas Championships, said she does not have an actual timeline at the moment, but she noted that she plans to sign in November during the early signing period.

First offered a scholarship by KU when she was in eighth grade, Nichols said the Jayhawks’ time and effort spent recruiting her has not gone unnoticed.

“I was excited when they first offered me because it’s so close to my hometown,” she said. “But as it went on and on, they just never stopped recruiting me and it just got more exciting and made me feel even more like they really wanted me.”

Nichols’ connection to Kansas goes beyond the school being close to home. She played AAU basketball for the Missouri Phenom program that current KU assistant coach Terry Nooner started, and fellow-KU assistant Karyla Middlebrook’s father, Reggie, currently is the club’s director. Karyla played for the Phenom program, as well.

Nichols, who is expected to be in the mix for McDonald's All-American honors this season, is currently rehabbing an ACL tear in her right knee. She tore her left ACL during her sophomore year but expects to be back playing with the Vikings sometime this December.

In the early stages, she said her recruitment was “complete chaos,” but she quickly learned how to manage it and she feels good about having it down to a final three.

She touts her aggressiveness as one of her best attributes and said her “go-to” is driving the ball to the rim to score. She said she loves the game so much that she always plays with a smile and that her face doesn’t always match the killer instinct inside of her.

Most online scouting reports point to Nichols’ versatility and size as the primary reasons she should be able to step in and make an immediate impact wherever she decides to go to school.

If she chooses Kansas, Nichols would be by far the most highly rated prospect to sign with KU during Schneider’s time with the program and one of the highest-rated prospects in Kansas women’s hoops history.

“I’ve definitely thought about that, and I love the thought of it,” she said. “The biggest factor right now is just their intensity and the way they’ve recruited me over the years. My recruitment has definitely found a nice rhythm and I’m just looking forward to having my answer.”

Let it be! KU is rising anyway, but adding a little rocket fuel sure wouldn't hurt.

So great to hear. Hopefully they will get to watch the FB game and have tons of fun in the excitement of a victory over Duke.

Such an exciting prospect, and what a great smile!

It sure sounds like KU is her top choice; let's hope it comes to fruition.

Oh please let it be!!! Not since Marion was our coach have we been able to bring in this kind of difference maker. Come on Brandon make it happen!! It's such a great school, volleyball is up, soccer is up and now football come on its a great time to be a Jayhawk!!!

Kansas needs to start getting these top 100 Kansas kids to stay in state and play for KU. Every year there seems to be 1 or two top 100 players from Kansas, in the 2022 class there was #96 Beatrice Culliton, a 6'3" P from Saint Thomas Aquinas H.S. who went to went to Oklahoma and # 38 Zyanna Walker, a 6' G from Wichita Heights H.S. who went to Louisville. #41 Addyson Brown, a 6'2 W from Derby H.S. is another Kansan from the 2023 class that has committed to Iowa State.

Update on how the visit went?