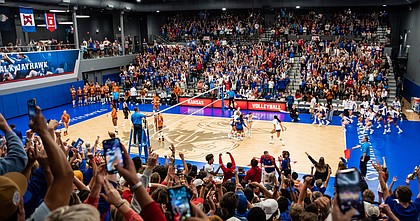 It was a night of déjà vu and lost opportunities for the Kansas volleyball team, which lost to No. 1 Texas in five sets at Horejsi Family Volleyball Arena.

Wednesday’s loss was eerily similar to an October match in Lawrence against the Longhorns last season, when KU won the first two sets but lost the match.

In the first set, Kansas trailed 21-16 yet rallied to win. Super-seniors Rachel Langs and Lauren Dooley were monsters at the net, combining to record three blocks and two kills down the stretch. 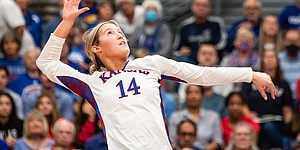 Kansas sophomore Caroline Bien measures a ball during the Jayhawks' five-set loss to No. 1 ...

In the second, the Jayhawks dictated things from start to finish and again closed out UT by playing better volleyball at the end. The final point of the set featured KU’s Kennedy Farris, Katie Dalton and Ayah Elnady all laying out to save the point, with Farris launching a pass over the net that sent two Texas players scrambling in different directions and landed in to give KU the 25-23 win.

As soon as the ball touched down, the sellout crowd at Horejsi exploded and the Jayhawks took all the momentum into Set No. 3.

Included among those in attendance on Wednesday were Kansas football coach Lance Leipold and safety Kenny Logan Jr., along with KU Athletic Director Travis Goff and Chancellor Douglas Girod.

“The environment was just crazy. It was awesome,” sophomore Caroline Bien said after the match. “A sold-out Horejsi is super-fun, but it would’ve been more fun if we won.”

The second-set victory set the stage for Kansas to need one win in the next three sets to knock off the nation’s top-ranked team. KU coach Ray Bechard said that sometimes that can be a dangerous position.

Looking every bit like the No. 1 team in the country, Texas won the third set 25-18. Senior Logan Eggleston started to control the match all over the floor, crushing balls at the net and ripping kills from the back row, as well. As she roared, her teammates rallied, and the Longhorns put the Jayhawks on their heels.

By the end of the match, Eggleston had logged a career-high 29 kills, prompting Bechard and Bien to call her “player of the year material.”

Bechard said Wednesday’s loss stung for a couple of reasons. The first was obvious.

“We’re 0-1 in the Big 12,” he said. “That’s what the standings are going to say. I mean, that’s the wake-up call. We’ll be disappointed until we meet (Thursday) and then we’ll move on. I think we wrap our mind around enough good things that happened tonight, too.”

The second reason for KU’s disappointment was the fact that they walked away knowing the match was there for the taking.

Texas responded in the third and fourth set with the kind of tenacity you’d expect from the top-ranked team in the nation and a perennial national power.

Despite Eggleston’s masterful play and the Longhorns’ incredible resolve, Bechard lamented the fact that KU still had chances to close out the match and could not get it done.

In the fourth set, with Texas leading most of the way, KU rallied late to tie the set at 20, but UT won five of the next seven points to force a fifth set, which Texas won 15-9 after never trailing.

Both Bechard and Bien said they were proud of KU’s effort from start to finish. Bien said she knew her team was ready to play on Wednesday and that the Jayhawks entered the match expecting to win.

“We really brought it,” she said. “We were right there.”

Sometimes, though, just playing hard isn’t enough. After all, after falling behind by two sets against a Kansas team that had been ranked for much of the season, Texas refused to let the slow start impact the outcome.

Rather than sulking and panicking, the UT players locked in and played their best volleyball over the final three sets. Eggleston certainly did her part, but the Longhorns were physical at the net, relentless in chasing down every ball they could get near and found a way to avoid the mental mistakes that plagued them in the first two sets.

In the five-set thriller, those little things and the smallest touches made all the difference. Texas made more of them and Kansas walked away thinking about what could have been for the second year in a row.

Wednesday marked the first time all season that UT had lost two sets in a match.

“In a moment like this, great effort and execution have to merge,” Bechard said. “Just the great effort isn’t going to be good enough. I can’t fault their effort, but there’s moments where the execution’s got to match that.”

Next up, Kansas will play at Kansas State at 4 p.m. Saturday.

#KUvball leads UT 2 sets to 0 after this WILD finish to Set No. 2. pic.twitter.com/i4nbMkt1J3

Glad to hear of the support from the BB & FB teams. More sellouts for everyone would be great.

The last 3 or 4 paragraphs sounds like the antithesis of why the football team has been successful. Hopefully VB will get back on track their next game against the purple kitties.

That was fun to watch.

Great match, great effort by both teams, great atmosphere, too bad we lost.

A couple thoughts:
1) we finished with 12 blocks and I think we had 10 after set #2. Sets 3,4, and 5 it seemed as if the UT attackers were hitting at will against our back line. Not sure what changed but our blockers were very ineffective after set #2.