Kansas-Iowa State football clash to kickoff at 2:30 p.m. on Oct. 1 on ESPN networks 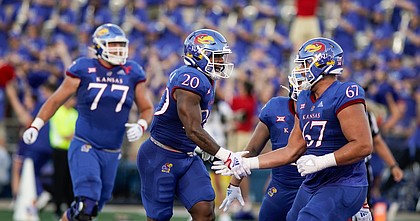 The KU-ISU game will be televised on either ESPN2 or ESPNU, marking three consecutive weeks of nationally televised games for the 3-0 Jayhawks.

Game times and channels are typically announced a little less than two weeks ahead of time, with networks and conferences waiting as long as possible to put the best matchups in the best time slots.

If Kansas can continue its winning ways, the Jayhawks likely will find their way into later start times as the season progresses.

KU’s first two games of the season were available only as streaming options on Big 12 Now via ESPN+.

The BB facet is likely a factor in fs1 this week.

It probably helps that both are undefeated. Hopefully that can be the case next week as well, though ISU has a tough one this week.

How long will it take for an announcer to reference the “Coach K” overlap?

That'd be a good betting line. My guess is first four minutes of the game. haha!

Annoying. I subscribed to ESPN+ specifically to get the KU FB games.

God, please not the U. Very irritating to not be able to watch...even "buying" ESPN on my cable and paying for ESPN+. The darn cable company split the U away rom ESPN and ESPN2 so U isn't in my package. If you're paying for ESPN+ you should get all of the ESPN broadcast regardless of TV package.

Iowas State TRAVELS well...there will be a HUGE crowd for that...buy your tickets NOW so we can MINIMIZE their footprint!!! It's very important that the Duke game is packed...lots of people from all over the country are coming to Lawrence this weekend to see AMERICAS' TEAM in battle against the Blue Devils...TV ratings will also be through the roof!...America want to see their team...their Jayhawks in action!

Thank God Sling has a sports package (for an additional 11 freakin' dollars) that includes the U.

Guys, I've lived a long way from KU most of my life so I'm willing to do ppv. Even though I've purchased ESPN+, SLING and the sling addition for ESPNU it is still cheaper than what I'd pay per view. So, get a few buddies, (one with a big house and big TV, do all the subscriptions you need, and party! You may want to pool to pay for a hotel and dinner for the wife and kids of your host. Now is not the time to be cheap. We are in a very special time. God Bless Travis Goff (how 'bout that Dodge!) Lance Leipold and family. Let's do this!