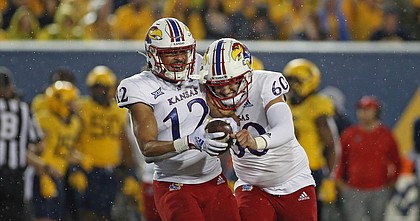 In past years, a 14-0 deficit after 10 minutes would have likely been enough to cause the Kansas football team to capitulate.

Instead, the Jayhawks mustered the points, toughness and resilience needed to bounce back from that early hole — and then hold on again late — to win 55-42 at West Virginia a week ago.

"A year ago, some of those would have gotten away from us at halftime — by halftime," coach Lance Leipold said.

But that wasn't the case, and the Jayhawks are riding the momentum of consecutive wins to start the season as they prepare to face future Big 12 opponent Houston on Saturday afternoon.

Not since 2009 has Kansas begun 3-0. It will face a tough challenge from the Cougars, who are 1-1, have played consecutive overtime games and not too long ago were touted as a trendy pick to seize the Group of 5 bid in the New Year's Six bowl games.

The Jayhawks trailed by at least 13 points at halftime of five of their first nine games last season. Each of those games, as expected, led to a sizeable defeat.

That was not the case at West Virginia. Kansas pulled even just over three and a half minutes into the third quarter, then found itself farther in unfamiliar territory when it led 42-31 with less than five minutes remaining.

West Virginia managed to tie the score in the closing seconds, but Kansas, behind sophomore cornerback Cobee Bryant's interception, was able to salt it away.

"We know how we can play better and were determined to play better," defensive coordinator Brian Borland said. "We didn't change anything that we were doing. There wasn't really much to fix other than, 'Let's remember our training. Let's execute our stuff better.' And we did.

"I just don't know that we could have done that last year. Once those games got away, sometimes, last year, they just got away and there wasn't any coming back."

Houston, behind redshirt senior quarterback Clayton Tune, also has a characterization to shed. It is a veteran team with a coach in Dana Holgorsen that expected this season to be the payoff of its four-year rebuild.

Should it defeat Kansas in its home opener, it still can be.

"For the third straight week, we are facing an opponent that you have to play very good, very sound, very disciplined, if you want to have a chance to win," Holgorsen said. "This is our Big 12 preview."

What to watch for

1. The film won't lie: Kansas didn't run many option plays in the season opener against Tennessee Tech but did so heavily in the overtime win at West Virginia. Houston won't be as surprised to see its opponent incorporate triple-option and run-pass option principles into its offensive approach and, conceivably, has had time to prepare an adequate game plan. How do both sides react?

2. Speedy delivery: Junior wide receiver Nathaniel "Tank" Dell Jr. and redshirt senior running back Ta'Zhawn Henry are just two of the players Houston will turn to as it attempts to gash Kansas with quickness. The Cougars will use Dell on screens and sweeps as well as in punt return, and Henry, who has been battling an ankle injury, led the Big 12 in kickoff return average in 2019 while at Texas Tech.

3. The heat is on: Sixth-year senior middle linebacker Lorenzo McCaskill joked last month that the only time he played in hotter conditions than what he experienced in four seasons at Louisiana was when he played in Houston. The forecast is for highs near 90 in Kansas' first day game of the season, so rotating players and managing hydration and fitness will be key, especially late.

Earl Bostick Jr: Kansas' sixth-year senior left tackle will have his hands full against Houston's defensive front, especially defensive end Derek Parish. Also a sixth-year senior, Parish set AAC records with 4.5 sacks and 6.5 tackles for loss in the Cougars' 33-30 double-overtime loss at Texas Tech last week. Kansas has yet to allow a sack this season and its protection will be challenged by Parish, a powerful speed rusher who will line up tight and wide to change his attack angles and has a strong rip move.

10: Touchdowns scored by sophomore running back Devin Neal over his last four games. Neal ran for two touchdowns against Tennessee Tech, then ran for two against West Virginia and caught a touchdown pass. He had five in his final two appearances last season.

73.9: The Jayhawks' conversion percentage on third downs this season, which leads the Football Bowl Subdivision. Kansas went 11-for-13 on third down following the opening quarter at West Virginia.

31: Career starts for Tune, who took over as the Cougars' full-time starter a month into the 2019 season. He's on pace to become Houston's third 10,000-yard passer.

Conditioning and rotation......so glad for the transfers in this game to bring depth.

Really looking for a better start this week. Second road trip in a row, so let's hope the staff has the team in the right mindset from kickoff. Holgorsen won't relent if we grant him 14 easy ones in the first quarter.

Zac - Any possibility there’s an article in the development stages covering how the transfers are doing? It was such a huge part of the offseason discussion then seemed to really quiet down when they weren’t more prominent on the initial 2-deep. As a fan watching the games, we just occasionally catch glimpses of them.

I’m guessing the coaches want to emphasize the wholeness of the team and it seems that is the case. At the same time, Craig Young was quoted after one of the games about recognizing how much more excited the returning players seemed to be, and even empathizing a bit because he realized how much of a struggle it had been in the past.

Borland said. "We didn't change anything that we were doing. There wasn't really much to fix other than, 'Let's remember our training. Let's execute our stuff better.' And we did.

We’ve heard this before. Maybe many times during the past decade. It feels much better after a victory. So glad the coaches are communicating better and the players are learning/executing better than in the past.

What a difference a couple weeks makes. This had been one of the dreaded, how could they schedule such a tough noncon opponent game. Now, we’re just a td dog, and arguably with a reasonable chance to win.

Parrish will be a handful but then Stills and the WVU D-line was supposed to be last week as well. We’ll need to be disciplined and maybe helped by their lack of discipline. It was Holgorsen’s long and repeated complaint after the TTU game.

Coach L. while you're in Texas see if there is any of that extra recruiting money UT throws at recruits is laying around the airport. $1m spent on 2 group visits is not unbelievable for them but still, wow. Talk about loose change.

We are getting 8.5 points against Hou. Sounds right for betting. Looking forward to seeing if the hype is real, or Hou. regains their MOJO.

If the home crowd boos them that would be sweet music to my ears!

#RCJH #COY (coach of the year for those confused by what Dirk uses) Sorry it's still just too soon for COY shout outs. I'll roll this out after the Duke game.

It says that the game will be on ESPN2 but not seeing it on schedule here in South Carolina. Bummer! Any other way to see the game? Can't find it on ESPN+ either. Right now I'm hoping that our games go back on ESPN+ as I can watch them there.