KU volleyball greats Havili, Payne back in town to have jerseys retired 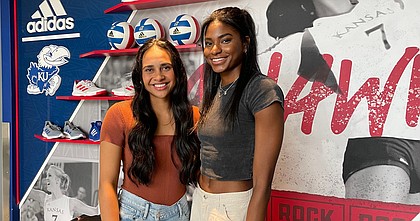 Already with their faces on the outside of the building, Havili and Payne now will have their jerseys hanging inside Horejsi Family Volleyball Arena.

The two former teammates and close friends who own multiple school records will be the first two players in program history to have their jerseys retired. The ceremony is slated to take place at the conclusion of KU’s match with Omaha at the Jayhawk Classic.

“I thought it was crazy for them to put our faces out there,” Havili said. “I thought that was just the biggest honor in the world and now… It’s so full-circle and so surreal that I can’t even put it into words.” 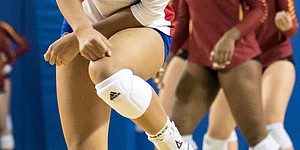 Kyle Babson/Special to the Journal-World

Back in town for the celebration — Havili from her post as a volunteer assistant at Purdue and Payne from her professional team in Turkey — the two shared their emotions about the honor and some of their favorite memories as Jayhawks.

First things first, though. After initially being told that they each were getting their own weekend, Havili and Payne quickly nixed that idea.

The two former Jayhawks spoke the last three words of that quote in unison, illustrating that even today, five years after their last match together at KU, the two are still as in sync as ever.

“To me, this is kind of like an alumni reunion and at the end of it my jersey will go up at some point and then we’ll all go have fun,” Havili said.

Payne agreed and said the whole thing still did not feel real.

“I don’t even know how to put a feeling on it or say how I feel,” she said. “It makes it more special that it’s together.”

Havili, 26, was a three-time All-American and back-to-back Big 12 Setter of the Year. She owns the school record for assists (5,255) and double-doubles (63) and recorded a handful of season and match records, as well.

Payne, 26, was a two-time AVCA First Team All-American and the 2016 Big 12 Player of the Year. She owns the KU record for career hitting percentage (.334), career kills (1,510 kills) and kills per set (3.63) and also recorded several single sea-son and match records.

Together, the two led the Jayhawks to their first ever Final Four appearance in 2015 and a Big 12 Championship in 2016.

While being back in Lawrence brought back all of those memories and more, the two Jayhawk greats said the smaller, less-heralded moments from their time with the program held an equally special spot in their hearts. 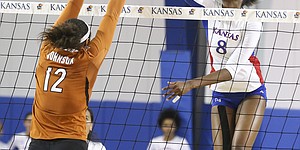 Kansas right side hitter Kelsie Payne (8) gets up for a hit against Texas middle ...

In addition to their families and friends, all but one member of their seven-player recruiting class made the trip back to Lawrence to celebrate with them this weekend. And several other former teammates and KU volleyball supporters were on hand, as well.

“The big stuff is cool, and it was so much fun,” Havili said. “But I don’t think I would’ve been here today without all the little things.”

Payne, who wrote returning to Kansas this weekend into her contract in Turkey, is headed back overseas next week. As she boards the plane with a host of new and fresh Kansas volleyball memories filling her head, she expects to be thinking about something else, as well.

Two great players, two great ladies, and two Jayhawks who will be remembered for all time. Rock Chalk.

My goodness, reading those accolades......It's a reminder to enjoy greatness while it is in front of you. Congratulations. RCJHK!