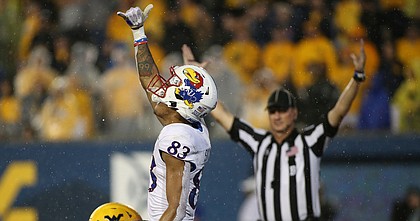 Through two weeks of the 2022 college football season, the Kansas Jayhawks are averaging 55.5 points per game.

That’s good for first in the entire FBS, a position in which Kansas is certainly not used to being.

Not all of KU’s 111 points have been scored by the offense, of course, but that’s a number that any team in the country would take in two games, no matter how the points come. 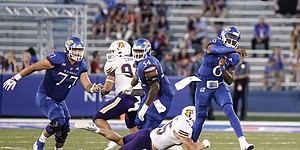 Kansas quarterback Jalon Daniels (6) heaves a pass downfield for a first down during the ...

It’s also not a number you should expect to see in the weeks ahead.

For one, you have to expect some regression given the fact that KU’s opponents will present much greater challenges from here on out, with eight more Big 12 opponents, a road game at Houston next week and a home game versus Duke still on the schedule.

For two, the Jayhawks’ impressive offensive start has been bolstered by a matchup with FCS Tennessee Tech and an overtime period against West Virginia.

While the rest of KU’s schedule features some pretty stout defenses — more on that in a minute, even if we are still talking about a small sample size — their matchup in Week 3 might not be one of them.

Through two games, Houston ranks 115th in the FBS in total defense, giving up 454.5 yards per game, and 106th in scoring defense.

That’s far worse than the Jayhawks’ Week 4 opponent, Duke, which ranks 65th in total D and 23rd in scoring defense.

For what it’s worth, West Virginia is tied for 93rd in total defense and, thanks in large part to what KU’s offense did on Saturday, 126th in scoring defense.

Here’s how the rest of the KU schedule — after Houston and Duke — shapes up in those two defensive categories through two weeks, with total defense first and scoring defense in parentheses.

Jalon Daniels has been a difference maker for this program, with his confidence, ability and efficiency taking the offense to new heights.

Given the depth at running back, the variety of options in the passing game and the experience and chemistry of this year’s offensive line, there’s plenty of reason to believe that Kansas’ offense can be one of the best we’ve seen in Lawrence in years.

Just take a look at what the program has done with Daniels operating as the team’s top quarterback during the past three seasons, and then remember that he’s a far better and more experienced QB today than he was in either of those first two seasons.

Six of those starts came during his true freshman season (he was just 17 years old when he made his first start) and the Jayhawks have scored 28 points or more during the Lawndale, California, native’s five most recent starts.

When you consider that Kansas did not even reach 28 points in 94 of the 117 games it played during the 10 seasons leading into this one, that really hammers home the point that finding a QB (and an offense) that can lead the team to points is kind of a big deal.

The question now is can he continue to do it against defenses that will be far better than what the Jayhawks have seen through two the first two weeks of the season?

Long road ahead. One point is evaluating KU vs the spread. Vegas is usually pretty good at odds. KU has covered both games with points to spare. CBS ranking has acknowledged the improvement, ranking KU at 56th in today's release. It is good to see the progress. Now the challenge is to all KU fans who want a winning program....winning programs have dedicated fans who show in attending games through both good and bad. Let's enjoy the recent good, and help support the players, team, school, and each other by being in the stands.

I hope we're able to make a statement as a fanbase at the next home game vs. Duke. #PACKTHEBOOTH

I like the overall look of our schedule. The toughest part of our schedule is the last half. We have a chance to build a decent record and build up even more confidence and improve our team overall before we begin to run the gauntlet of those last six games. We might even pick up a W or two in those last six.

Matt - It seems like there have been more OT games this year. Not sure if that is in any way based in reality. Someone somewhere must have a stat for that, yes? Do you know how likely it is for a game to go to OT?

Definitely agree that stat rankings are skewed this early in the season by the quality of the opponents.

Houston has played 2 teams (utsa, TTU) that are expected to score pts even if they aren’t highly regarded overall.

Duke benefits from a shutout against a bad temple team in their opener.

OU has played 2 teams that any rebuilding team would love to have on their schedule.

Definitely agree that the challenges will be greater in the weeks ahead. It would seem that going forward there are several things that are encouraging for KUs offense:
1. You touched on Jalon, but mostly lumped together his performance. He was a 50-ish% passer through the beginning of last year. I think it was since ksu that he’s been almost 70%. That’s a huge improvement in accuracy. All good O starts with good QB play these days.
2. The OL is vastly improved even from the beginning of last year. The players are executing but huge credit needs to go to Coach Fuchs. ACtually, all good O starts with good OL play since the beginning of time.
3. Coach Kotelnicki seems to be a really creative play caller. That’s not just for introducing the option into the WVU game plan though is a part of it. Thought I read something about this when he was first hired, though I have no stats or anything to actually substantiate the idea.

You take what the schedule gives you. So far, so good except an unacceptably poor start at WVU. I don't know the winning percentage of teams who go down 14-0 in the first quarter against FBS teams, but I can guarantee that it ain't great. Let's hope the staff has addressed the holes in the approach at WVU, though they should have never come up in the first place in season two. Against good teams, you don't get time to warm up. You just get beat down. We need to be ready to play at Houston. Imagine coming out of there 3-0 with a home game to follow? Probably the most excitement for KU football since '07.

These Champions are BALL'IN this weekend in Houston...load up those cars...trucks...vans...Rv's.... and buses...get on those trains and planes and get down there for some FOOTBALL!!!!!!!! 3 pm kick!

“This is a whole different animal,” he (Dana Holgerson) said. “I mean, this is a lot of offense. They're really good up front. They brought a couple of kids with them from Buffalo that can really play that know the offense. This staff's unique now. I mean, they've been together for a while, and they do a lot of stuff. So, it takes continuity within your coaching staff to be able to do all this stuff. We’ve got our work cut out for us defensively.”

Michael: great info. I remember when Holgerson made a quip about Weis, not nearly as respectful. He seems to be a bit of a straight-shooter.

When Saban returned from the pros, the first thing he did was fill-out staff, in a big, big way. When you think of all the stats, tendencies, etc., etc., it's clear that you need a full staff hitting on all cylinders. Yes, Saban came back from the pros without a staff. But he is Nick Saban. Now, his staff is so big, they can withstand the constant loss of coaches because the whole entity is bigger than one person. They are coming at you with "300".

Goff absolutely got this right. LL uses "holistic" about as often as my dad used a curse-word in a sentence. Which was a lot. Leipold understands that the coaching staff is every bit as much of a team as the actual team is.

This should be a good game. We should be competitive to the last second.

Dirk: He was 62% on Saturday. You omitted that from your post. Probably an accident. It's not bad for for a 70's era QB, but it is now 2022. He also is "Ohfer" on pitching the ball when he should pitch the ball.

Iowa State played Iowa, that should not count lol

Five competitive games in a row going back to UT game last year. That hasn't happened since 2008 either.

Actually glad we have another road game next, team might be a little tired, but good tough test.

Last football game I saw was the Rutgers game in Jersey when I lived there. Was just so excited to be there. Rutgers fans were worried before the game started, I just laughed. But that was then.

Waylon - That stuck out to me today as well. Kinda need to throw out cupcakes and iowas nonexistent offensive offense.

Brett - No accident. Didn’t talk about any individual games. Sometimes things like weather have an influence so a reasonable stat analysis is about trends. From a trends standpoint, even 62% is significantly better than the 50’s where he began.

As for 62% in the big picture of college football, I would suggest checking your perception against current data (no comment on the 70’s https://www.teamrankings.com/college-...). 62% gets you 66th; in the middle of current QBs. If you throw out the cupcakes, it gets you 33rd. While not top 10 like Jalon’s QBR, it’s still a significant step up from where he started, which was the point of my comment.

Way TOO Early for this Hype.

Armen - Actually, 2009 was a 5-0 start before the wheels fell off and the downward spiral began with 7 straight losses. 2008 ended with Todd Reesing to Kerry Meier for the win over mizzoo and a W against Minnesota in the bowl game so 2008-2009 was 7 Ws in a row even more than just competitive games. Still definitely agree its been too long and nice to have the change. Even saw one podcast that said KU football was now must see tv.