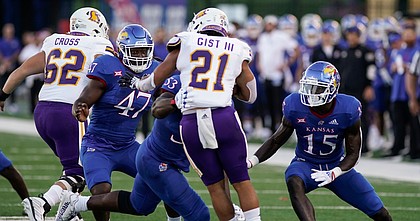 It’s been nearly four years since the Kansas football program had a player earn Big 12 Conference Defensive Player of the Week honors.

And it took transfer defensive end Lonnie Phelps Jr. just one week to end that skid.

The Big 12 on Monday announced that Phelps had earned the defensive honor for Week 1. Phelps finished KU’s 56-10 win over Tennessee Tech with seven tackles, three sacks and four tackles for loss.

A transfer from Miami (Ohio), Phelps led a KU defense that held Tennessee Tech to 97 passing yards and 190 yards of total offense. According to Pro Football Focus, Phelps received a Week 1 grade of 96.4, which was the highest grade for a defensive end in the entire country.

In addition to his big numbers, Phelps led with some big personality, too, often flashing a demonstrative celebration after his biggest tackles.

Phelps, who said after the game that while some of his current and former teammates razzed him not to do his signature celebration of grabbing his helmet, arching his back and screaming into the air after a big tackle, he couldn’t help himself.

“My role for that is huge because just a person’s juice can actually motivate a whole team,” Phelps said after the win. “It was a lot of fun.”

As for the words associated with his screaming, Phelps laughed when asked to share those.

Big stage coming in week 2. WVU has an all conference DL/Stills and a strong O. Need to disrupt JT and contain the RBs.

Thanks for including the Pro Football Focus Week 1 grade, and how it compares nationally; the highest grade for a defensive end in the entire country. It’s nice to have that big picture perspective.

Lonnie Phelps Jr was absolutely amazing in that game, and his demonstrative celebrations had the whole stadium pumped up. My new favorite KU football player? Maybe so, we'll see. Hope they can bring it again week 2... but either way, can't wait to get back in the Booth for the Duke game. Come on down, folks, it was especially fun to see in-person.

Wonderful recognition. I hope it is not the only received by a KU player. It is hard to believe that Kenny Logan was past over for this award. Now onto West Virginia. Rock Chalk.

A nice little storyline was created by the conference for week 2. Defensive POTW against the Newcomer of the week. CJ Donaldson had a big game for WVU at RB. 6-2, 240 he’s a load. JT said he liked handing off to him because it seemed that Pitt didn’t want to hit him. It will be a good test to see how much we have embraced Coach’s call to be tough and physical.