Ground and pound: Kansas runs for six touchdowns, scores two others in rout 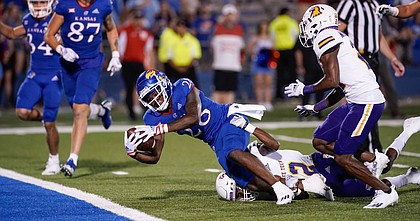 For months, coach Lance Leipold and the Kansas football team have talked about a renewed sense of confidence owing to the way they finished last season. They used those performances as motivational speeches, recruiting pitches and talking points about the direction they believe they are heading.

And while Friday's season opener was at times little more than a tune-up against an overmatched Football Championship Subdivision opponent, the early returns are positive.

The Jayhawks easily defeated Tennessee Tech 56-10 at David Booth Kansas Memorial Stadium before 34,902, starting Year 2 of Leipold's era with the first of what it hopes will be more than a few victories this season in front of the biggest opening-night crowd in eight years. 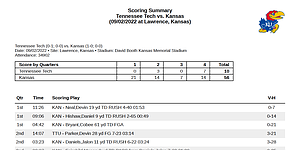 "Most of the things that we just talked about also is about gaining confidence, and this team just hasn't had a lot of it," Leipold said. "We had it down the stretch last year and it's great to see them kind of take it and go with it again tonight."

Junior quarterback Jalon Daniels completed 15 of 18 passes for 189 yards, a touchdown and an interception before leaving the game in the final minute of the third quarter. Sophomore running back Devin Neal, the Lawrence High graduate, ran four times for 108 yards — his fourth career game in triple digits — and two touchdowns.

The Jayhawks racked up 502 total yards, including 246 in the first half, ran for seven of their eight touchdowns and were up 35-3 at halftime. Their 46-point margin of victory was their largest since they defeated Rhode Island, also an FCS opponent, 55-6 on Sept. 3, 2016. 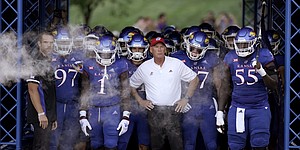 View a photo gallery from Friday's home opener between the Kansas Jayhawks and Tennessee Tech Golden Eagles at Memorial Stadium.

"I would say that I feel like we kept our foot on the pedal the entire game," Daniels said. "No letting up. Whatever play was called, we were able to go out there and execute it."

Friday's game was never going to be easy for the Golden Eagles, who went 3-8 last season but returned nine starters on offense and nine on defense. They appeared overmatched in nearly every phase; their quarterback, redshirt senior Jeremiah Oatsvall, a transfer who spent last season as a walk-on wide receiver at Memphis, was rarely given time to find his targets, and their defense did not consistently have the strength nor athleticism to control their opponent.

Kansas, which added 21 players via transfer since the end of last season and gave scholarships to six others from the high school ranks, already looked different than it did for significant stretches of last season. That was apparent from the opening minutes; it took six minutes for the Jayhawks to score two touchdowns, with Neal ripping off a 19-yard touchdown run and redshirt sophomore Daniel Hishaw Jr. running 9 yards for another.

Hishaw's touchdown, his first since 2020 as he missed all of last season with a hip injury, was preceded by a 56-yard pass from Daniels to redshirt sophomore Quentin Skinner.

"I had a flat route that was No. 1 in the progression," Daniels said. "I saw that they ended up having somebody outside of it. The safety ended up trying to take the corner route by LJ and he tried to cheat it, so that just leaves Q and a backside safety."

Kansas then blocked a field goal and returned it for a touchdown for the first time since 1996. Junior defensive end Jereme Robinson got his hands on Devin Parker's 50-yard field goal attempt and sophomore cornerback Cobee Bryant scooped the ball and returned it 61 yards for the touchdown.

Although Tennessee Tech made a 28-yard field goal attempt with 14:07 left in the second quarter, Kansas strung together two scoring drives in the final four minutes to keep its foot on the accelerator.

Daniels capped a six-play, 22-yard drive by going 11 yards for a touchdown on a designed run, and he then led the two-minute offense on an efficient seven-play, 63-yard drive over 1:29 that included seven passes, all completions, and a defensive pass interference penalty and ended with a 2-yard touchdown catch by senior tight end Mason Fairchild.

Both teams kept the clock moving in the second half. Kansas scored its fifth touchdown with 4:21 remaining in the third quarter when Neal, on the first play of the drive, ran 80 yards up the right side for the touchdown. It then added a sixth with 13:25 left in the fourth quarter with redshirt senior Jason Bean piloting the offense as redshirt sophomore running back Sevion Morrison, the transfer from Nebraska, ran 11 yards into the end zone before the lead hit 49-3.

Bean tacked on another touchdown on a 7-yard run with 9:46 to play, and Tennessee Tech finally found the end zone with 5 minutes remaining when Oatsvall completed a 4-yard pass to Heath Price.

Kansas went 6-for-7 in the red zone, with its only blemish a missed 40-yard field goal attempt by Jacob Borcila on the opening drive of the third quarter, and converted six of eight third-down attempts. Nine players had a catch, led by Arnold, who had four for 56 yards.

Tennessee Tech was held to just 190 total yards. Oatsvall went 10-for-18 for 76 yards, one touchdown and one interception and was sacked five times, including three by Lonnie Phelps Jr., a redshirt junior transfer from Miami (Ohio).

"We obviously made mistakes," Neal said, "but Week 1 — I don't ever get satisfied, but where we're at compared to last year first game, it's night and day."

Kansas QB Jalon Daniels on defeating Tennessee Tech, his play and turning to WVU by KUsports.com

The box score shows attendance at 34,000, which looked about right. The corners were empty and the bowl was pretty empty. I see that they moved the band closer to the students, probably a good idea. It's a holiday weekend when, amazingly to me, a lot of students who just got on campus actually go home. For what reason, I have no idea. But that's what they do now. So it hurts attendance.

The running backs looked pretty impressive. I'm not sure how they will keep four of them engaged, but it seems like a really talented group. You could tell that Neal looked the most comfortable with the offense. He is the Real Deal Neal.

Plenty of good feelings to go around but now it gets tough due to Zenger. WVU was in it all the way with 17th ranked Pitt, so they may be much better than many of us thought. We must be competitive in these next two games in order to attract a bigger crowd for Duke - an absolute must-win.

Playing WVU in week 2 is Zenger’s fault? It will be important to play well in the weeks ahead and get some Ws, while keeping games competitive in order to attract the casual fans.

Isn’t the drive that stalled inside the 10 also a red zone fail?

Basic plays for the most part....went a little vanilla on purpose....Coach didn't want to give West Virginia too much to look at on film going into next week...GREAT start to the season...but you guys know that you need to be totally focused this week...road games...hostile environments are completely different...you have to buckle down and know that playbook by memory...everybody on the team...lots to learn this week about going in and playing in a deafening loud venue.....REAL football begins in Morgantown next week!!!..Great job and Good Luck!!!

First, it was great to see the student body showed up and remained well into the second half. 34,902 (74% capacity) was reported to be the largest opening crowd since 2014. Second, great to see a running game, although hard to gauge how well it will perform once Big 12 play starts next week. It all starts with the offensive line that did well against the undersized Golden Eagles. Being able to establish the run and control the clock (which was not necessary the case last night based on the long TD runs, e.g., 4 carriers for 108 yards and 2 TDs for Neal) is a way for KU to keep relevant in more games. Shoot outs are not the best approach in the Big 12, although Jalon Daniels throws a pretty football and looked good in the first half. That in stride 56-yard completion to Quentin Skinner in the 1st quarter was impressive. Finally, Kenny (the real deal) Logan (who left the game early with leg cramps) was credited with only 4 tackles, which is a good thing. He led the Big 12 with tackles last year, because the players up front were not stopping the run. Led by Lonnie Phelps (7 tackles, 6 solo, 3 sacks and 4 TLFs) the defensive line and linebackers were much more active. In total KU made 63 tackles, including 5 sacks, 12 TLFs, and 2 QB hurries. Keep that up defense. Fun night for the team and fans. Hopefully a few more to come. Rock Chalk.

Also, not to be a negative Nancy, but that interception! Three white shirts.....I could hardly find the receiver in that wave of white and I was watching in slow motion.

Brett - I too was a bit surprised by the interception, though the players have already acknowledged it wasn’t a perfect game. Hmmm, are we expecting a perfect game? Or is it just comforting to be able to complain?

In contrast, it is nice to hear Daniels discuss the progression/analysis on the throw to Skinner.

As for my previous comment, I’m fully aware that you discussed WVU and Houston. Also realizing that you used insults to dodge the question; how is playing WVU in week 2 zenger’s fault? Or is it just comforting to be able to complain?

Coach Leipold is challenging the players to step up their game. Focus on being a little bit better each day. Maybe it’s a reasonable challenge for fans too. You’ve got lots of great insights without resorting to the old complaining.

Oh no, you had reading comprehension issues on here. You? The king of complaining about that very thing on here. I am shocked.

Dirk you resort to complaining too. The only difference is in your head you think you're not. You are never wrong about anything, anytime for any reason. Even if you are.

You use insults too.

Sorry to break the bad news to you, you are no better or worse than any of us on here. Even if secretly you think you are.

Always here to help you see the light buddy. It's a full time job, but I am up to the challenge.

TN Tech looked like a high school team at times out there. Nice win, glad we scored a bunch of points but not sure what that tells us about our team's progress. A win is a win!

Regardless of competition, I saw a KU offensive line push people around for the first time in forever, so I'm a happy guy.

The rallying cry of "grind the opponent to hamburger" was well received. Rock Chalk!

Larry Brown started those numbers and script...I have always hated it...I like block lettering and numbers...please go back to it!...Blue jerseys...gray pants no emblem on helmet...wear the same uniforms every game at home...white jerseys gray pants no piping.. red lettering.. blue helmets.. no emblem on the road...Alabama..Georgia..Penn State etc. never have these stupid crazy uniforms...please do the same...Champions don't do that...uniformity in your approach...forget the stupid gimmicks! When you are losers it doesn't matter...Oregon started this trend....we are winners now..it's time to start acting like it...we want our brand to be recognized...we need old school traditional uniforms! No names on the back of home uniforms unless it's traditional block like Alabama or our little sister in Manhattan....by the way..little sister has great uniforms...we need to get with the program!