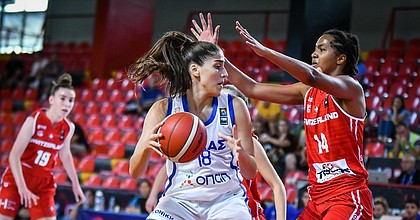 Despite all that Ioanna Chatzileonti experienced during the summer — time back home in Athens, success representing Greece internationally — she was often thinking about being back in Kansas.

"I missed being here," Chatzileonti said. "Everybody's so excited for the next season."

Chatzileonti, now a junior, believes the Jayhawks have much more to prove in the coming months. After they went 21-10 and reached the second round of the NCAA Tournament for the first time in nine years, nearly every player will return.

And several of them, including Chatzileonti, do so having sharpened their skills against Europe's elite. The FIBA U20 Women's European Championships, held in July, divided 32 teams into two tournaments, with Chatzileonti and sophomore Danai Papadopoulou selected by Greece, sophomore Sanna Strom representing Sweden and freshman Zsofia Telegdy playing for Hungary. (Also, junior Mia Vuksic represented Croatia in a series of non-tournament exhibition games.)

Chatzileonti averaged 18.3 points per game, which was third in Division B, and 9.9 rebounds per game to help Greece finish in fifth place. She started all seven games, averaged 30.4 minutes and had four double-doubles.

She's no stranger to excelling at that level as she was named the most valuable player of the FIBA U16 Women's European Championship in 2018.

"It was good coming back after two years, because it was COVID year and the year after we couldn't play also, so I kind of miss playing and participating with my national team," Chatzileonti said. "I'm glad I went back there and I represented Greece. It was just fun."

What made the event particularly special is that her mother, father and two brothers drove eight hours from Athens to Skopje, the capital of North Macedonia where the tournament was held, in order to watch her compete.

"They were kind of emotional because it was the first time that they saw me play in person after two years," Chatzileonti said. "Since I came here, they couldn't travel because of COVID, so it was just good seeing them in the stands cheering for me."

Chatzileonti left Kansas in late April and spent more than a month at home before joining the national team for tryouts and training camp in early June.

The week-long tournament ended July 17, and after returning home for two weeks, she flew back to Kansas and returned to campus on Aug. 3.

She said those two weeks were the longest stretch she had gone without formal basketball activities in several years, and she immediately felt comfortable when she rejoined the Jayhawks.

"We work hard in practice, and my academics, I'm doing good, so I missed my life here," Chatzileonti said. "And now I'm a junior? Oh, my gosh. Wow. But I feel like a freshman. I don't know. I missed being here in the facilities. I'm kind of used to my life here, and I was looking forward to coming back. I left and after two or three weeks, I was like, 'I cannot wait to go back. I cannot wait to go back and just stay here.'"

The annual "Late Night in the Phog" celebration will take place Oct. 14, and the Jayhawks will open the season just shy of a month later when they face Jacksonville at Allen Fieldhouse on Nov. 9.

That will be the start of a more difficult season than in years past as Kansas is set to play Texas A&M at home and Saint Mary's, Arizona and Nebraska on the road as part of a ramped-up schedule designed to keep the team ready for an NCAA Tournament return.

"It motivates us because, like, we've been there," Chatzileonti said. "We went to California. We experienced the first two rounds, so I think getting this experience, we can just stack the days now and build up to that and just work."

She is certain to be a big part of the Jayhawks' push to the next level. Of all of KU's sports teams, women's basketball is the one I'm most excited about. Many look to have season to season improvements, but probably none to the level of excellence the women's team is likely to enjoy.

One thing continues to bug me, however. It's the glaring difference between how Ioanna's last name is pronounced by the game callers (including Jimmy Chavez) and her own pronunciation per her player profile page (https://kuathletics.com/sports/wbball...). I'm betting on hers as being the correct one.