Kansas soccer closes season with 5-1 loss to No. 15 TCU at Big 12 tournament 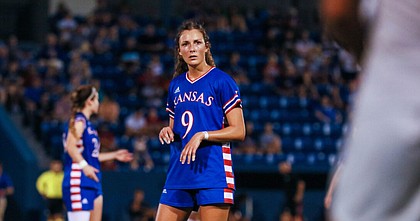 The Kansas soccer team fell to No. 15 TCU in the quarterfinals of the Big 12 Championship in Round Rock, Texas, on Sunday, losing 5-1.

Super-senior Rylan Childers scored the lone goal for the Jayhawks, whose season comes to an end with a 9-9-2 record.

The Jayhawks reached Sunday's postseason game with a 2-0 win over Iowa State at home earlier in the week. That victory, paired with a couple of favorable results for Kansas, was enough for the Jayhawks to earn the No. 7 seed at the Big 12 tournament.

Their time in the tourney was short-lived, though, and it was clear it would end that way fairly early in Sunday's match. TCU scored its first goal in teh game's ninth minute and then scored again in the 22nd minute. KU trailed 3-0 at halftime and did not score until the 89th minute of the match.

The fact that Childers found a way to put one on the board for the Jayhawks was the perfect summary of how Kansas fought all season long.

“This group showed unbelievable character over the course of the season,” KU coach Mark Francis said after the loss. “That aspect of this group is what I am most proud of, how they handled adversity when things were not always going right."

Well, that was a rough one. Still, this team was fun to follow.