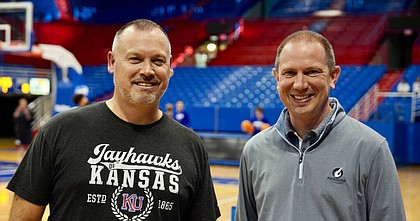 Lawrence native and longtime broadcaster Steven Davis is joining the Kansas women’s basketball program as its play by play voice for the 2022-23 season.

Davis replaces Jimmy Chavez, who called KU women’s games for the past seven seasons before moving to Omaha, Nebraska in August.

The son of legendary KU men’s basketball and football play-by-play voice, Bob Davis, the younger Davis is a 2005 KU graduate with more than 17 years of broadcasting experience.

During his days as a KU student, Davis was a manager for the men’s basketball team for four seasons. But it was clear from an early age that his passion was broadcasting.

In recent years, he has served as the play-by-play voice for UMKC men’s and women’s basketball as well as in minor league baseball for the Arkansas Travelers.

In addition to his hoops experience, Davis has handled radio and television broadcasts for prep sports, college football, softball, soccer and volleyball throughout his career.

Davis has logged time off the air, as well, working for television production crews for the Kansas City Royals and Big 12 Conference and assisting KU football broadcasts from 2002-06. He even served as the public address announcer for Kansas volleyball in 2005.

In his new role, he also will be the host of Kansas women’s basketball coach Brandon Schneider’s weekly Hawk Talk radio show.

“I’m ecstatic for this opportunity to broadcast a Jayhawk women’s basketball program that’s elevating toward new heights,” Davis said in a news release announcing his hiring. “I can’t wait to get started on the journey with coach Brandon, his staff and team.”

According to the release, the Jayhawk Radio Network operates under the direction of Learfield and announcers are hired by Learfield in cooperation with Kansas Athletics.

Davis currently lives in Overland Park with his wife, Katie, and their four children.

His first call with the program is slated for Nov. 9, when the KU women open the regular season at home against Jacksonville at 7 p.m. at Allen Fieldhouse.

Welcome aboard, Steven! (He sounded great in his first broadcast, Hawk Talk with Brandon Schneider.)

Nice. His father Bob was a great guy.

And a fantastic voice and play-by-play guy. One of my all-time favorites.