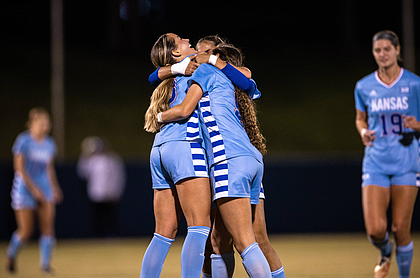 Two goals from freshman Lexi Watts led the Kansas women's soccer team to a 2-0 win over the Iowa State Cyclones and into this weekend's Big 12 Championship tournament in Round Rock, Texas.

It will mark KU's first appearance in the postseason event since winning it in 2019.

“I told the group when I talked to them, you really find out the character of people when things don’t go the way you planned or things don’t go right,” KU coach Mark Francis said after Thursday's win at Rock Chalk Park. “We have had a lot of injuries this year, season-ending injuries, (and) the rest of the group has had to step up and some kids who wouldn’t have played as much have played tons of minutes and have done really, really well.”

Watts' first goal on Thursday came in the 34th minute. After a turnover by Iowa State, Watts rocketed a shot over the ISU keeper's head and into the net. That goal gave Kansas a 1-0 lead at halftime.

The freshman's second goal — her sixth of the season — came in the 69th minute, with Watts ripping a shot from 25 yards out into the top right corner of the net.

“I couldn’t have done it without the team,” Watts said after her big night. “It’s a team effort, but we are super happy and we are ready to get to the tournament.”

Kansas out-shot Iowa State 9-6 for the match, with a 4-1 edge in shots on goal. Watts tallied all four shots on goal for Kansas. Kansas collected its fourth shutout of the season, while Kansas goalkeeper, redshirt freshman Hayven Harrison, collected her first career shutout.

Next up, the Jayhawks will take on TCU in the Big 12 tourney. Kickoff is slated for 5:30 p.m. and the match will be broadcast on Big 12 NOW via ESPN+.

Rock Chalk. Good luck in the Big 12 tournament. Too bad the tournament is no longer being held in the KC area (Swope Park Village from 2013-2019); however, the Round Rock complex looks very nice. It is a fun event to attend. We were at the 2019 championship won by KU. Hopefully with the new KC Current facility being constructed, KC might make a bid to bring the tournament back to our area. Although the attendance improved from 2,025 for the championship game in 2019 at Swope Park to 4,295 at Round Rock in 2021.

Is this it for Francis?

Waylon - With a lot of injuries this year, season-ending injuries, (and) the rest of the group (young players?) had to step up and some kids who wouldn’t have played as much have played tons of minutes and have done really, really well. I would hope they’re keeping Coach. It also seems there isn’t nearly the same pressure to win big in the non revenue sports.