The University of Kansas athletic department is tapping into the state’s motto — Ad Astra per Aspera — as a guide for its long-term strategic plan for all of KU’s sports and student-athletes.

The plan, dubbed “To the Stars,” was released Wednesday and it included a 33-page outline that 46 people worked more than a year to develop.

In a letter to Jayhawk fans, KU Athletic Director Travis Goff said “countless” others were asked for input through surveys and conversations with department leaders, and it’s clear that the second-year AD is excited about the ambitious direction of the department. 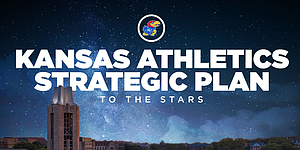 To the Stars: Kansas Athletics' Strategic Campaign of 2022 ( .PDF )

The “To the Stars” strategy will prioritize culture building, capital projects, name, image and likeness opportunities, financial sustainability student-athlete wellness and more, and it outlines specific goals for each of those areas.

Goff noted that success in football and men’s basketball would be critical for the future of the department because succeeding in those two revenue drivers will allow Kansas Athletics “to invest in all 16 of our athletic programs, thereby benefiting 500 student-athletes.”

While the goal with all of KU’s sports is to win at the highest level possible and do it consistently, the “To the Stars” plan emphasizes upping recruiting efforts and setting clear expectations for each sport and coaching staff.

The expectations will be judged on both an annual basis and through a five-year plan that assesses program metrics, team priorities and areas of improvement.

Many of the capital projects have already been announced, but KU included them in their overall vision for the future. Chief among them are upgrades to David Booth Kansas Memorial Stadium and Allen Fieldhouse, with improving the fan experience the focus at both venues.

But the To the Stars strategy does not limit capital improvement to KU’s two main sports. In also includes a 10-year master plan for all sports and drills down to areas as specific as “dramatically improve Wi-Fi opportunities throughout all venues.”

Future upgrades to KU football’s Anderson Family Football Complex and baseball’s Hoglund Ballpark also are specifically identified as a part of the plan. KU plans to create a facilities portfolio that is “among the best in the Big 12 and top-25 in the country.”

Much of the strategy is focused on the student-athletes, with wellness being a key component, through addressing both physical and mental health. Inclusivity, through developing framework designed to promote diversity, and setting a goal to be in the top third of the Big 12 and the country for graduation and academic support is also a part of the plan.

The NIL initiatives that continue to be a part of KU’s daily discussions — through partnerships with Mass Strategies, Altius, Opendorse and others — is also a big part of the “To the Stars” vision.

KU will aim to maximize resources and opportunities for NIL deals for all of its athletes and has set a goal of growing licensed NIL opportunities by 25% in the next two years.

Kansas Athletics also will seek better engagement with the campus community as a whole and will continue to strive for financial sustainability department-wide.

The sustainability aspect includes goals of renewing all ticketed events and Williams Education Fund annual contributions at a rate of 88% or higher each year as well as ranking in the top 20 nationally among all Collegiate Licensing Company schools and the top 25 nationally of Fanatics’ online sales.

While some of the strategy can be tracked on a daily basis, a lot of KU’s successes or failures in these areas will not be known for several years. Goff said that was by design and was part of what he was most proud of with the “To the Stars” strategy.

“This document is not fixed or final,” Goff said in the letter. “It will serve as a compass that will evolve just as college athletics continues to. … This is our time, Jayhawks.”

“failing to plan is planning to fail”

Let’s hope the inverse is true!

It’s refreshing to see strategic and analytical thinking, something only Bill Self did in the past. Now we also have it from the AD as well as both LL and Andy K of the football program.

I liked it better when Star Trek used it in the late 60's. Goff is our Captain Kirk, Who is Bones, Scotty, and Spock?

Any women included to help steer us to the stars?

Love this part - successes or failures in these areas will not be known for several years. What a plan, bold, unmeasurable and without consequences. Classic Goff.

Sports: the final frontier. These are the voyages of the Kansas Jayhawks. Its ongoing mission: to seek consistent success. To seek out new capital and new capital improvements. To boldly go where we have never been before! More than just a basketball school.

The picture is great by the way. Very Funny.

If you scroll down to the Strategic Plan Committee on this link, then you'll see who all was involved.

Benny my question still stands, are there any women in leadership in Goff's dream plan? Not the masses who threw in their wish list of goals. Did he leave any one out?

I will say this, Goff's Star Trek dream is the most well done $50,000 over 5 year fund raising initiative I have ever seen. The number of wish's that is outlined, with absolutely no reporting on progress, is a pot of stew with everything included. Somewhere, in that mess, someone will see something they like and if they have $50k grand to throw away they will jump at donating.

He might as well put this on gofundme? He didn't because no one would read or believe the description.

He did leave out a few things though in his dancing with the stars plan - World Peace, Ending Racism, Climate Control, Politicians who actually do something, and Stopping Spam Calls.

Obviously long overdue, although a more focused vision for the football stadium under Sheahon Zenger was initiated but it did not have sufficient support to get off the ground. I remember talking with Chancellor Girod shortly after he was appointed, and Zenger had planned a big announcement that day without getting the Chancellor fully up to speed. Goff is a very positive and dynamic individual and will help KU athletics move into the present and then lead them into future. I will say I completed the survey regarding the football stadium amenities and some (most) of the seating options were outside of my price range. Nevertheless, if KU can develop a winner culture in football, then certain people will pay. Rock Chalk.

Guess I'm not the only one who's phone becomes useless at football games. LOL

John is there any mobile carrier signage in any of the venues. If so, KU should start with them, if not find one and see what options could be done to improve the Wi-Fi by offering some signage in the concourses or around the venue.

Alpha Wireless Stadium Antenna has a multi band solution that is about 1k per antenna. Not sure about any back end costs.

If I'm there to watch the game. With that said, if people want better coverage that isn't wifi, they could simply have a carrier install a cell antenna on top of the press box. It would be costly. I'm also betting that there already are some integrated boosters installed by at least on carrier around campus in more than one spot due to the number of students there.