Michael Haag, Special to the Journal-World 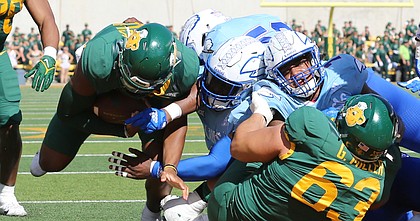 “We didn’t get much of a rhythm,” KU coach Lance Leipold said of the game’s opening half. “We didn’t convert on third down. We didn’t punt the ball really well. And they (Baylor) pretty much dialed up what they needed to, run and play action, to make it very difficult for us.”

Baylor’s freshman running back, Richard Reese, gave KU fits, rushing for 186 yards on 31 attempts and two scores. In all, the Bears outgained the Jayhawks 437-288 in total yards and 273-56 on the ground. 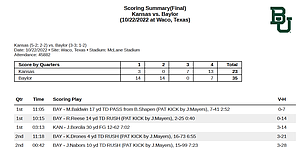 For the second game in a row, KU’s Jason Bean filled in for injured quarterback Jalon Daniels, who was suited up and threw the ball around during the pregame but did not play. Bean passed for 232 yards on 16 completions in 27 attempts with one touchdown. He also scrambled for 25 yards on eight attempts with a score on the ground.

Despite Daniels not playing Saturday, Leipold said KU’s starting QB was “moving in the right direction” for the future.

It was a first half full of blunders for the Jayhawks, who went three-and-out on the opening drive and then fumbled on their second possession. Within the first five minutes of play, KU trailed 14-0 after Baylor capitalized on each mistake.

The Jayhawks then marched to a 12-play, 62-yard drive that was capped off by a 30-yard field goal from Jacob Borcila. Those were the only points of the first half for Kansas, though, as the Jayhawks punted on their next two drives and allowed the Bears to score 14 more to lead 28-3 at halftime.

In the midst of Baylor’s first-half domination, KU cornerback Mello Dotson picked off a Blake Shapen pass but KU’s offense responded by going three-and-out, foregoing any chance to gain some momentum.

“Even when Mello got the interception, we went three-and-out. And then we punt it to the 1 and then they go right down and score again,” Leipold said. “That’s the disappointing part of the game right now. We were making some of those plays early in the year; we’re not right now.”

The second half was a different story and KU played with more fire and physicality in the final two quarters. 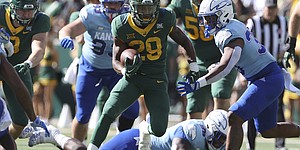 The Jayhawks ripped off 20 unanswered points in the third and fourth quarters, capitalizing off the Bears’ mistakes. Leipold said the talk at halftime was about fighting back.

“Obviously, when you’re down more than three scores, 28-3, you’re gonna have to close the gap a little bit,” he said. “Late in the game you’ve got to try to make that happen, as well. So, it’s score-related but also matchup-related sometimes, too.”

Bean said the team came out “pissed off” following the first half rout and added, “once we get going on offense, I think it's kind of tough to stop us.”

KU was within striking distance after a 4-yard touchdown run by Bean trimmed Baylor’s lead 28-23 with a little under six and a half minutes remaining. But KU’s run defense was victimized again, when Reese and the Bears sealed the deal with a seven-play, 69-yard scoring drive to set the final margin. Fifty-five of the 69 yards on the drive came on the ground, as the Bears marched down the field and kept the clock running, taking precious time away from KU’s comeback hopes.

“The part I’ll take away from this game is when Jason scored and there’s five, six minutes to go, we’re right there,” Leipold said. “I won’t put it on our defense because they gave us so many more opportunities to even keep us there when we were struggling at other times.”

KU gets its bye week now, after opening the season with eight games in eight weeks. Leipold said it’s a much-needed idle week, but that there would be no time to pull back after falling into a three-game skid.

“It’s not an off week,” Leipold said. “We’ve got a lot of work to do in a lot of different areas and things that we talk about and have to get better at.”

Coming out of the bye, the Jayhawks will welcome No. 11 Oklahoma State to Lawrence on Nov. 5 for another tough Big 12 battle. Game time and network have yet to be announced.

Leipold said Saturday’s loss was another learning experience for his program, but that the group needed to be able to start showing signs of fixing some of its mistakes.

“We continue to learn more about ourselves as we go,” Leipold said. “We have to be able to recognize that, address it, and continue to have the burning desire to get better and find a way to win football games.”

The defense needs a lot of improvement, but at this point in the season, I doubt we'll see much improvement, and we'll have to wait till next season to see a better KU defense. I don't know if the issue is that KU's defensive players aren't strong enough or skilled enough, or if Brian Borland is simply not a very good defensive coordinator, but the defense is the Jayhawks' biggest Achilles heel. The defense picked a terrible time to fall apart in the fourth quarter when they allowed Baylor to put the game out of reach.

The first five games of the season have shown me that Lance Leipold is the real deal and that he has KU heading in the right direction. These last three games have shown me that KU still has a long way to go in its quest to be a consistently good football team.

Who chose the cute “pixie” outfits that KU wore? The only thing missing was their Pink Bunny House Slippers.

Bryce, regarding your points in the second paragraph.....Yes, Yes, and too early to tell. Give him another season. But, come on everyone......isn't it great
to actually care about KU football enough to the the time to complain about it's performance and have hope that things will improve?

At full video speed I still think that second fumble was an incomplete pass. But here's the deal...the referees are instructed to let potential fumbles play out (too many times a whistle stopped play when in fact it was a fumble), believing that it was an incomplete pass video review will overturn it. The flaw in this thinking is the need for undeniable proof that it was incomplete, and too many times that can't be determined, so a fumble is now been 75% predetermined by the instructions and not the play on the field. #sigh

Last year, we played our best football in the final part of the season. So, of course, improvement is possible. In fact, if this team doesn’t get better, then it is a coaching failure just as much as our slow starts are. Those must be fixed, they are absolutely killing us.

The uniforms were fantastic. Among my favorites. Robert, your lawn chair and a group of kids running through your yard are calling!

I, too, liked the uniforms, particularly the helmets. But it never entered my mind that the uniforms had any effect on the game's outcome or player's performance.

One thing that should be on the uniform is the player's NAME. I eventually learn the numbers but still want the names. And, for goodness sake don't attach a slogan. The team doesn't need a reminder about "Unity," or "Team," or "Don't Hate;" just the player's name.

Pretty much the same comment here about the uniforms. I liked them except for the jerseys being Carolina Blue. I like Names, not slogans. We already get plenty of the slogans elsewhere. As it is, I do recognize some of the players by number but most of the time I am referring to the roster on kuathletics to see who "that" is. I keep it open during games so I can reach over and look at it. I'd rather have the names on the uniforms, home and away.

Charlie Weis was an arrogant son of a gun, but he did recognize that if KU was outmanned, which they were during his entire tenure, to try and shorten the game and control the ball. I have suggested repeatedly that KU will have decreased chances of winning in shootouts against more talented teams (in all 3 phases). KU’s Big 12 wins are now against the bottom of the Big 12 (ISU 0-4 and WVU 1-3). Last week OU ran 100 plays to KU’s 62, and yesterday Baylor ran 83 plays to KU’s 49. KU must improve it run game (56- to -273-yard rushing). Stats don't lie. There is reduced hope that KU can win another game unless their offense controls the ball better and keeps the defense on the sideline. The winning teams this week in the Big 12 scored 38 (TCU), 41 (OSU), 48 (TTU), and 35 (Baylor) and OSU (3-1) and TTU (2-2) are next up. Rock Chalk.

The changes made from the 1st half in the 2nd on both defense and offense seem to suggest we can improve this season. Regardless, we are still relevant and competitive and that is a HUGE change.

Getting some key players back from injury just might help a little, also. Would be even better if we could get Hishaw back, too, but we all know that's not happening this season.

Ugh! It was nice while it lasted. This is what I get for getting my hopes up for football. All the analyzing in the world will not prevent the fact we are back to being the B12 FB scrimmage team. It’s sad when all you expect is to be “competitive.” But it is an improvement. Heck we hung 42 points in Norman. But OU is suspect.

Let’s go bowl bid. One more little win. Who can we beat? Who’s left? OSU, TT, KSU? That much needed win is looking real interesting. I’ve done it every football season, I can do it again. RCJHGOKU

No one is happy about a loss. But I like to point this out. BU won the first five minutes, 14 - 0. KU won the last 55 minutes 23 - 21. Yes, I know we were down 28 - 3 at halftime, but it's enjoyable to look at it my way! Years previously and even the first bunch of games last year, we would have folded after the first five minutes. We have hung in there in each game we lost this year. That must be considered as a positive. KU football is looking better, even if it hasn't fully arrived. I believe that we need to look at things as positive as we can. I hated the jerseys. That's the color of another team that we don't care for. Our cheering groups wear that color too often. KU blue is a much darker shade, certainly not powder blue.

These are the old traditionals...not that ugly stuff we wore Saturday...white jerseys....red lettering and numbers ..blue helmets...gray pants...no piping...black shoes...The announcers saying they were throwback unis...they got that right...throwback and burn! I do like the block lettering and Kansas on the front that is big enough to read...the traditional in the pic is what we should wear to every road game. We need to have one home uniform and one road uniform...that is how you build a brand...different uniforms every week confuse the braindead masses that make up the majority of the population... not to mention the families of possible recruits...the big brands realize this and most never deviate from their original...they understand that the uniform is an important part of the brand...it looks fickle when you change every week and fickle is not good when you are building a program...it sends a bad subliminal message...keep it simple!