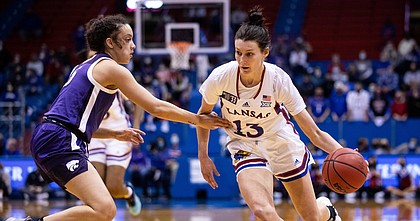 Seniors Zakiyah Franklin and Taiyanna Jackson also received honorable mention nods. All three were starters last season, when the Jayhawks made their first trip to the NCAA Tournament in nine years.

The 2022-23 all-conference preseason squad was voted on by the Big 12 coaches, who were not allowed to vote for their own players.

Kersgieter earned preseason recognition for the third consecutive season, having previously been named an honorable mention pick in each of the past two seasons. One of KU's leaders a season ago, Kersgieter was named to the 2022 all-Big 12 first team as a junior after leading the Jayhawks in scoring at 13.4 points per game.

Franklin earned preseason honors for the second time as a Jayhawk, after previously receiving an honorable mention nod prior to the 2020-21 season. Last season, the Lakeland, Florida, native earned all-Big 12 postseason honorable mention recognition after averaging 12 points per game and leading the Jayhawks with four assists per game.

Jackson claimed a spot on the preseason all-Big 12 team for the first time in her career, following a dominant first season with the Jayhawks. A native of East Chicago, Indiana, and transfer from Trinity Valley CC, Jackson became the first Kansas women's player ever selected to the Big 12's all-defensive team last season. She set a new single-season school record and ranked fourth in the nation with 95 blocked shots.

Reigning Big 12 Coach of the Year Brandon Schneider will return four starters from the 2021-22 season, which featured Kansas returning to the NCAA Tournament for the first time since 2013. Schneider led the Jayhawks to a 21-10 record, which included a fifth-place finish in the Big 12 at 11-7.

KU will open the 2022-23 season on Nov. 9 against Jacksonville, for the first of seven home games during non-conference play.

The women's basketball preseason poll is expected to be released on Thursday.

Congratulations to Holly, Zakiyah and Taiyanna, but would have guessed that Ioanna would also have been acknowledged. No doubt that will be rectified at season's end, very likely along with others on the squad.

Dirk, you're probably thinking of Wyvette Mayberry, who played two seasons at Tulsa. "As a sophomore, started 27 games and led Tulsa in scoring at 14.1 points per game, while shooting 44.3% from the field and 43.0% from three-point range." https://kuathletics.com/sports/wbball...

Hopefully they can build on last year's success.