Matt Tait: There's plenty to celebrate about Kansas football these days and Saturday was another doozy 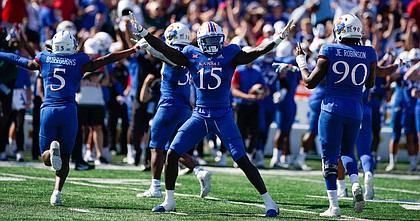 Talk to anyone in a Kansas uniform and they’ll tell you Saturday’s 14-11 win over Iowa State that moved the Jayhawks to 5-0 on the season was anything but comfortable.

There was talk from a number of different players about stress, gray hairs, regrets and aches and pains.

But as soon as Iowa State kicker Jace Gilbert’s 37-yard field goal try missed left in the final minute, none of that mattered. It couldn’t. Just a couple of minutes later, a few thousand Kansas fans were back on the field for the second week in a row, celebrating another Kansas win. 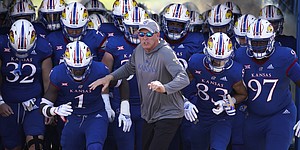 View a gallery of images from Saturday's game between the Kansas Jayhawks and Iowa State Cyclones.

These days, instead of faces filled with looks of “How did that happen?” like in the past, celebrating a KU football now is all about pure happiness and joy.

It’s not too soon to say that these people are acting as if they expect these kinds of results. And the way the Jayhawks are playing right now, why wouldn’t they?

After winning the first four games on the strength of their offense, it was the Jayhawks’ defense that delivered on Saturday. That made several of KU’s stars on offense more than a little nervous, having to sit and watch rather than doing something about it.

But when that final field goal try missed, no one cared about offense, defense or even style points. It was all-out euphoria on the KU sideline, from Jayhawks past and present.

Here’s a quick look at some of the more notable sounds and scenes from the KU sideline following the Jayhawks’ three-point win on Saturday.

• Former KU quarterback Todd Reesing was living and dying with every snap in those final few minutes. As the kick missed, the greatest QB in KU history jumped high into the air and later found former KU linebacker Banks Floodman — another No. 5 — and leapt into his arms to celebrate the win. 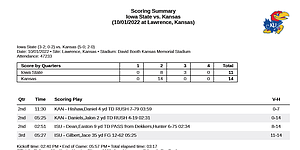 • As water flew like a dozen fountains around him, KU linebackers coach Chris Simpson ran to the benches behind the KU sideline and jumped up onto them the way a player might, gesturing to the crowd to get loud, which they did.

• While all of this was going on, the deep tones of the Campanile bell tower were raining down on the stadium to signify another Kansas win. Victory bells, we’ll call them.

• In the peak moment of the celebration, KU Athletic Director Travis Goff and KU coach Lance Leipold’s wife, Kelly, hugged and high-fived one another with smiles as wide as the field on their faces.

• Senior linebacker Taiwan Berryhill, who finished Saturday with three tackles, including one of KU’s five sacks, still had enough energy to skip behind the bench like a kid whose mother had just told him he had an unlimited budget at the nearest candy store.

• Running back Devin Neal sprinted to the locker room, yelling to no one in particular, “I’m going home!”

• Defensive lineman Eddie Wilson shared a loud and live moment with KU basketball players Jalen Wilson and Kevin McCullar Jr., in the end zone, and it was nearly impossible to make out anything any of them were saying. They were happy, though. No doubt about it.

• Wide receiver Luke Grimm shared a giant hug with strength coach Matt Gildersleeve and then had to fend off three separate requests from fans wanting his helmet, game jersey and gloves. He gave up the gloves but hung on to the rest.

• The fans got into the act, too. They yelled more than a few things that were not suitable for print, but there was a little PG flavor, too.

• While all of these scenes and so many more were unfolding near the south end zone, the public address announcer summed it up perfectly: “It’s fairly clear by now that the expectation is to win,” he said. “So please return to your seats.”

No one did. But no one cared either.

These celebrations, like this team, are different than the ones we’ve seen in the past. There’s substance behind them. They seem real and not just part of some punchline destined to be a part of some sort of twisted college football joke.

Kansas was not perfect on Saturday. There were a lot of mistakes, a few close calls and all kinds of things they’ll see on film that they wish had gone different. But they’ll get the opportunity to fix all of that in the days ahead. And they’ll do it with the knowledge that their undefeated season rolls on and bowl eligibility is now just one win away.

That’s a lot to process for any program five weeks into the season. But for this program to be talking about that today is pure madness.

Asked after the game if he heard anything in the on-field celebration that stood out to him, Leipold smiled and said, “I was just wondering who was going to pay the fine.”

From the back of the room, Goff said in response: “We’ll figure that out.”

“Another great crowd,” Leipold added. “I guess I should publicly thank them. They are a difference and you can hear it. I hope to see (them) again next week.”

You can probably count on it at this point, coach.

I have a tendency to focus on the negative, and as the game ended, I had mixed feelings, given how terribly we played and how lucky we were to win.

But then I started thinking about all of the great things that we did, like the interceptions, the sacks and the fact that we only allowed one touchdown.

And I also start thinking that a college football season is somewhat like March Madness, in that a win is a win and it's all about surviving the bad ones and winning anyway.

One caveat, though: as much as the defense came through in the "bend, not break" mode, remember that this was against the worst offense in the Big XII.

It's certainly safe to say that we're going to have to play a hell of a lot better to beat TCU.

Have y’all noticed that when teams realize they are losing to KU, they begin to soil their pants, and make mistakes all over the place?

Takeaways:
✓ The defensive squad eliminated all doubt of their ability to play winning football.
✓ Sometimes we don't play as well as we wanted to. It happens.
✓ We learn from our mistakes. We get better.
✓✓✓ WE WON THE GAME ✓✓✓

Len - Good comments. Glad you talked yourself away from the pit of despair.

I would suggest to you that the idea that ISUs O is among the worst is still somewhat skewed by 25% of the data coming from the iowa game vs some nowhere team, and 1 (now 2?) of their toughest conference games. It is reasonable that they play a P5 opponent, but until everyone plays some semblance of a similar schedule, the averaging stats this early in the season are skewed.

The coaches also coached to the game being played. That’s real time on the turf and different than numbers on a piece of paper.

Similar thoughts regarding TCU. Half their schedule is among the worst in all of cfb - Colorado and Tarelton State, plus what is becoming one of the worst D’s in the conference without their starting QB for O support. Everyone was amazed last week when the kitties started the trend in part because of the hairball they coughed up the previous week. Maybe all of that was built on OUs presumption of power with no actual power validation to start the season. More of the scheduling skew.

Matt - Is KU getting fined?
I heard about TTU getting fined for the post shorthorn celebration (and a local business stepping up to pay it), but also thought that had something to do with some negative interaction between fans and ut players. Thought the KU officials handled it well. Letting the fans onto the field at the north end while ISU exited to the south.
Don’t the fines ramp up with each occurrence?