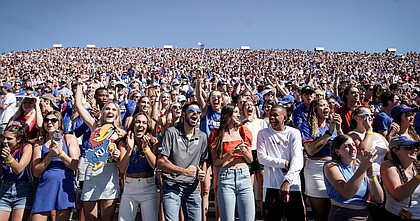 After two weeks of clamoring for college football’s biggest pregame show to come to Lawrence, the University of Kansas finally made the cut on Saturday night.

Next week, when the 5-0 Jayhawks take on 4-0 TCU at 11 a.m. Saturday, ESPN’s College Gameday will be in Lawrence to feature the Kansas football program for the first time in program history.

ESPN announced the news on Twitter on Saturday night.

Gameday has been to KU for its college basketball show on several occasions in the past. But the fact that it’s coming to town for football in Lance Leipold’s second season in charge of the program is just the latest wild sign that the program has turned a serious corner.

Winning games, talk about bowl eligibility and national rankings and having a quarterback find his way into the Heisman Trophy conversation were all wild enough.

But this takes things to a whole other level. I mean, the college football slate next week features Oklahoma-Texas and Alabama-Texas A & M. Yet, it's Kansas that gets Gameday.

All week, ESPN will promote its trip to Lawrence, making the KU campus the center of the college football universe for at least one week.

"This is another reminder that anything is possible at KU," Kansas AD Travis Goff told the Journal-World on Saturday night. "I'm so happy for our student-athletes, Lance and his staff and our incredible fans."

One of the biggest factors in hosting Gameday is figuring out where the set and stage will fit into the landscape at each stadium.

While KU will have many options, the most likely recommendation will be for the ESPN crew to set up at the top of Campanile hill so that the shots of the show feature David Booth Kansas Memorial Stadium and the tailgate scene on the hill behind them.

It remains to be seen if that’s actually where it will be staged.

Either way, even if the show were filmed in the most nondescript and bland spot on campus, the mere fact that Gameday will be in town is big enough.

Kickoff for KU’s Week 6 game against the Horned Frogs is slated for 11 a.m. on FS1.

The meeting between KU and TCU will be the 39th in the series, with TCU holding a 25-9-4 edge.

We're coming to KU for the first time EVER 😤

Heck yea! Give Leipold whatever he wants and let's become a football university.

I hope we play better than we did vs ISU. It will be insane if we win to get bowl game while Gameday is here!

Hopefully it is up on Jayhawk Blvd....either in front of Strong...or on the lawn between Fraser and Watson Library ...I want the Gameday folks to get the real feel of the campus...no better place than between Fraser and Watson.. and there is room for their semis back by Blake...I just wish the leaves were changing a little bit...still about 3 weeks away for that...we have a pretty campus...lets show it off!!!

Location will be tricky because of the 11 am CT and the broadcast leads right into the game. Too far from the stadium and fans won't have time to get to their seats before kickoff. Matt had mentioned in a tweet that the idea would be that the first 2 hours were outside the stadium and the 3rd would be inside to encourage fans to get to their seats. So based on that, I'd bet that the primary set will be at the bottom of the hill near the practice fields.

What are the odds that it starts with someone wandering around the Phog? Guessing there will be plenty of drone shots of the great campus and Mass St.

KU’s turnaround is maybe the biggest story of the season, but TCU really cemented it earlier Saturday with their demolition of OU. It will be a tough game.

yeah, Allen Fieldhouse (home of the national champions) empty, Booth Stadium packed. I'm sure that will be a recurring theme.

Also pretty sure that I saw Jalen Wilson celebrating with Jalon Daniels in the post-game melee on TV which was awesome.

There’s an espn article that compiles a half dozen perspectives of the weekend. KU is named in 3 of them. Crazy and hilarious.

So many first times since 2009. Hopefully, history doesn’t repeat itself. We went on to lose the next 7 that year and begin what some have called the worst decade of football in history.

The probability of losing some games this year is fairly high. But our attitude situation is entirely different from 2009. We don't have a coach that is under fire by a prima donna player and his dad with deep pockets. I think the players knew what was going on in 2009 and they began to lose heart and our season was doomed. Mangino was by no means a perfect coach. His dealing with players was a lot like Bobby Knight's. Leipold isn't a perfect coach either, but his player relationship is very high and KU's players/coaches relationships are quite high. That makes a world of difference.

Very true, Garry. I personally am having a hard time finding a sixth win in the remaining KU schedule. I thought TCU would be the sixth win, but after the way they 8!+cH-slapped Oklahoma on Saturday, I'm not sure. The KU defense isn't as consistently good as the Orange Bowl unit of 2007, and Lance Leipold is only in his second year with the program, so anything more than seven wins seems to me to be unlikely.

Nevertheless, the program has made real, legitimate, tangible progress. Already this team has achieved a great deal:

Those achievements alone are noteworthy and make the program worthwhile to follow and cheer for, and it warms my heart to see KU football doing well once more.

On Sept. 14th I predicted Gameday and was ridiculed a little bit...right after that...the talking heads started speculating...on Aug 23rd ..I predicted that Kansas would be the talk of college football this year...feel free to do a dive into my comment history...I knew from the first week of camp that we were going to be very competitive...this team has something...it has buy in....it has all oars rowing in the right direction...that is all you can ask for...the team is improving...UGLY wins are where the growth takes place...Commish Warren...our program has life and we want to make our case for Big Ten membership...Gameday will get the Big Tens' attention...we need to show off our school in the very best way this week...roll out the big time hospitality for the folks from Bristol...a good impression might seal the deal with the Big Ten!

I just wish I was in charge of their visit...I would do it right!

One thing I love about this site's comment section is that the receipts are all there. Let's not be revisionist. Your prediction on 9/14 was that Gameday would come to Lawrence for the KU/Duke game if we won at Houston. The replies were more along the lines of "hold your horses on Gameday coming to town unless we win that game and more"... which all turned out to be 100% correct.

I say go ahead and let him gloat. But it was actually my prediction which came true, with both KU and TCU ranked in the top 25 this week. Of course, when I said it, I was still doubting that it would happen.

Gary - Definitely agree there’s positive differences this year, though I think you’re being very generous to Coach Mangino. I think many people at that time were still basking in the orange bowl memories and trying to ignore the warts.

Lots more positives this year. Hopefully the fans have heard Coach’s early season (pre-WVU?) message to the team to respond positively even when adversity inevitably happens.

Anything is possible when the powers that be take the football program seriously and put a compelling product on the field!

Six months ago we were debating if we could eek out 3-4 wins and the consensus was a “unlikely.” So if you said by week 6 we would have ESPN in town in a battle of unbeaten teams I would have told you to stop snorting glue.

What these players and coaches have done in a short amount of time is remarkable. And somehow I am even starting to appreciate Brian Haney’s voice… Good luck Saturday Jayhawks.

This is very true. Pre-season looking at the schedule the only obvious win was week 1, and winnable games after that were hard to see. Now at 5-0, the easiest way to predict the next winnable game is to look at whoever we are playing on Saturday. We literally could beat any of the remaining teams. Though they likely all are favored against us from here out. But with the way this team is playing you have to believe they will win at least 2 out of 7 going down the stretch.

TCU is lucky that College Gameday is coming to the game to help them build hype and prevent what was a likely letdown game after their big win over OU.

Baylor looks to be on the decline. TTU has some holes. OU is in trouble. Texas seemed to respond to their wakeup call from TTU. OSU and KState seem to be surging. The Big XII is up for grabs right now, and while winning a conference title still feels like a longshot at this point, it's well within the realm of possibility now.

I've said all along I'm not going to lose my BLEEP until we become bowl eligible.

Im hoping that happens this weekend!

It's a fun team to watch!

When was the last time we said that?

I like the Campanile idea but just wondering if there is room for fans to set up behind the panel with the signs,etc. So maybe the Watson/Fraser idea is best. A great dilemma to have!!