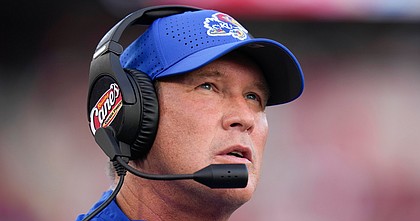 After weeks of hearing Kansas football coach Lance Leipold and his wife tell anyone who would listen that they were happy in Lawrence and planned to be at the University of Kansas for a long time, KU officials announced a new contract agreement between KU and Leipold on Wednesday afternoon.

Details of the new contract have not yet been released, but the agreement is expected to be a long and lucrative deal that will keep him in place as the head coach at Kansas through at least 2029.

Reports of Leipold agreeing to a new deal — including one from the Journal-World — first surfaced Tuesday night. On Wednesday afternoon, KU made it official with a graphic on Twitter that simply said, “We’re just getting started with Coach Leipold, who agreed to terms with Kansas Athletics.”

Leipold and KU first agreed to a six-year contract worth a total of $16.5 million in 2021. After a 2-10 start to his Kansas career and a solid offseason, KU added a year to his initial contract before the start of the current season. That bumped the deal to seven years and pushed his average compensation from roughly $2.75 million per year to about $2.83 million per year.

The years on this new deal will not necessarily be that big of a difference, but the compensation is expected to grow significantly.

It’s also possible that the language and numbers surrounding Leipold’s buyout should he ever want to leave KU will look different, too.

The new agreement between the two parties puts to end weeks worth of worry from the Kansas side and national speculation about Leipold as a potential candidate for the open jobs at Nebraska and Wisconsin.

His track record of turning programs around at KU and Buffalo, not to mention his six Division III national championships at Wisconsin-Whitewater, have made him a popular name on lists for all kinds of job openings in recent years.

The work he has done at Kansas, though, has led to more attention than ever for the 58-year-old head coach who is in the mix as a national and Big 12 coach of the year candidate.

In fewer than two full seasons, Leipold returned the long-suffering Kansas football program to national respectability. This year alone, the Jayhawks raced out a 5-0 start, returned to the national polls and welcomed ESPN’s College GameDay to Lawrence for a football game for the first time in school history.

Kansas became bowl eligible for the first time since the 2008 season in Week 10 and the Jayhawks’ enter the final week of the regular season with three conference wins and guaranteed to finish in at least eighth place in the Big 12 standings, with the chance to move up a couple of spots with a win at Kansas State.

Kickoff for that one is slated for 7 p.m. on FOX in Manhattan, and the Jayhawks will learn their postseason fate on Dec. 4, when the bowls make their selections.

A bold investment. A bold vision.

Building together for sustained success.

Building a winner at Kansas. Together 📈

Hopefully 6-6 and near the bottom of the Big 12 (3-6 if the Jayhawks lose on Saturday), is the worst outcome going forward. Coach Leipold seems to be the correct fit for KU and the region. However, expectations for the football program have now been readjusted. Rock Chalk.

Hopefully, this will be a long term relationship between Leipold and KU football, resulting in an era of consistantly good teams with winning records and even vying for conference championships. We've had some good seasons, but too few and far between. We have had some good coaches, but none of them stayed around long enough to establish a good football program. Perhaps KU hasn't been willing to put in the dollars necessary to do so. Hopefully that drawback is changing with a new statium, well paid staff, etc. We'll see.

Not only should this help leading into signing day and the next round of transfers, but it also seems to be a stamp of approval on the stadium plans.

It’s apparently been in the works for the whole season. Well done Mr Goff. Has there ever been another coach that’s gotten 2 extensions in one season?