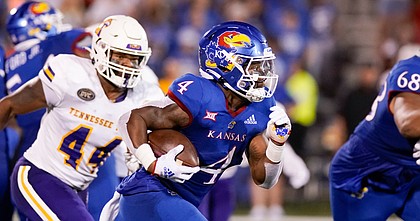 It remains to be seen if this season’s Kansas-Texas football game will bring with it the same kind of excitement as last season’s 57-56 overtime win by KU in Austin, Texas.

But for the Jayhawks, the 2021 game has proven to be the gift that keeps on giving.

Not only did that win spark last season’s strong finish that carried over into bowl eligibility in 2022, but it also made a couple of Kansas football players household names.

A few weeks ago, KU quarterback Jalon Daniels and tight end Jared Casey filmed an Applebee’s commercial that featured the two-point play connection between the two as its central theme.

It was the second such commercial for Casey, but the smiles on the two Jayhawks’ faces throughout the spot made it clear that they haven’t grown tired of it yet.

“Seeing those guys reap the benefits of that was really cool,” KU running back Devin Neal said. “

Kansas coach Lance Leipold is paid to look at every game the same, and it’s in his nature to think much more about the next challenge than to get stuck celebrating the past. That’s not to say Leipold does not think about last year’s win at UT fondly. He does.

“Maybe not as much as others,” he said. “The thing I’ve always said is it’s the two weeks that followed, to me, that were (the biggest thing). I’d like to think that where we’re at standing today, that was a starting point. … It was a sign of some things.

“I’m sure (they answered) enough questions in their press conferences about it, too. And they’re going to be ready to come in here and play and play extremely well. We have to be able to match that.”

A couple of close looks at this year’s Longhorns, and several days of film, was enough for Leipold to focus more on what’s ahead on Saturday and less on what happened a year ago.

What’s ahead is another stiff challenge.

“Dynamic, very athletic, depth and speed and the skill level,” Leipold said of the Longhorns. “That was a battle (vs. TCU) last week. Not everybody plays Alabama in a non-conference game to start the season. … It’s an excellent football team. You can see the difference of a second year with Coach (Steve) Sarkisian.”

While Texas presents problems offensively, — KU defensive coordinator Brian Borland called QB Quinn Ewers “as good as anybody we’ve played” — the Longhorns don’t utilize the same kind of tempo as KU’s recent opponents. At least not for the entire game.

“They’re unusual in that respect,” Borland said. “They’re more like us than a lot of teams we’ve been playing recently.”

The Jayhawks have been a high-scoring, explosive offense for much of the season. That’s both with starting QB Jalon Daniels and back-up Jason Bean running the show. Leipold said early in the week that Daniels was “really, really close” to being back and Bean was limited early in the week.

Regardless of which one plays — or if they both do — KU offensive coordinator Andy Kotelnicki said this team has proven it can adjust when needed.

“What you’re talking about is a team not panicking when there’s a personnel change at a position,” Kotelnicki said. “I think with how we practice and how we do things and the reps that we get, our guys understand that whoever the 11 guys are on the field it doesn’t really matter. The expectations are the expectations and the standards are the standards. And we can uphold those standards because of how we’ve practiced; we’ve seen guys go out there and do it.”

During the past couple of weeks, the Jayhawks have relied much more on the run than the pass. And a big reason for that was the play of Neal.

During the past two games, Neal combined for 414 rushing yards on 56 carries, while also factoring in as a receiver, as well. And the second-year back and Lawrence native appears to be getting stronger and more explosive as the season progresses.

“I feel great,” Neal said Tuesday. “A lot of high volume (carries) but also a lot of intensity in the training room, as well.”

Saturday will be Senior Day for several Jayhawks, and several more seniors will move forward with a decision make about whether to return for their COVID year or call it a career.

One Jayhawk who definitely will be done after this season is defensive lineman Sam Burt, and he said he was “at peace” with his career heading into his final game at Memorial Stadium.

“That’s part of why I came back,” Burt said. “And I feel good about it being the time now because I feel like I left (the program) better than I found it.”

Unfortunately, I am not too optimistic about this game. Evers is the real deal. I watched the Texas-Alabama game to start the season and Texas was having their way with Alabama’s defense until Evers was injured. Like Daniels he elevates the Texas offense to a different level and can throw the deep ball with accuracy. So it comes down to the offensive and defensive lines and Texas is superior. I hope the cold weather slows the longhorns down, but I would be surprised if KU can repeat the outcome from a season ago. One can hope. Rock Chalk.

Dogs by 9.5 huh? Seems like that is the biggest spread against us for the year. Last year we were 30 point dogs, and we won.

Thank you Sam Burt. Thank you seniors. You are DEFINITELY leaving this program in a better place. And it's just the start. Be proud!

Hope they are serving hot chocolate at the game. Can't wait. Rock Chalk!

A win at home would be icing on the cake for Leipold and team. KU has performed well at home and UT is struggling on the road.

Both teams will be fired up. Texas is seeking revenge. Kansas wants to win on Senior Day.

I hate it when Brock is right.

Robert can be very depressing.