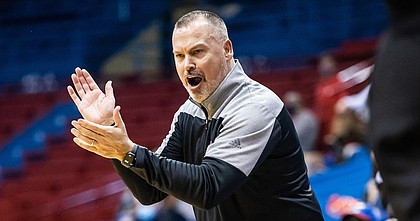 The Kansas women’s basketball program’s recruitment of five-star prospect S’Mya Nichols came down to one simple thing, and both Nichols and KU coach Brandon Schneider are hoping it opens the door to even bigger things ahead.

Rather than joining a program like Oklahoma or Tennessee, which both have national title pedigrees, Nichols’ connection to Kansas left her with one thought.

“You don’t have to go to a top-five program,” the Shawnee Mission West senior recalled thinking to herself throughout the process during a recent interview with the Journal-World. “Why don’t you make a top-five program.”

Nichols took the first step in trying to help Kansas do just that earlier this month, when she signed a letter of intent to join the Jayhawks. In doing so, she became the highest-rated player to sign at KU under Schneider — the five-star prospect is ranked No. 34 nationally by ESPN — and one of the highest-rated players in program history.

Nichols officially made her decision at Late Night in mid-October. And she had pretty much decided Kansas was the place for her a week earlier.

At Late Night, while sitting in Schneider’s office, she shared the good news with KU coaching staff, which erupted in celebration.

When told after KU’s recent season opener that Nichols said Schneider did not exactly hide his joy upon hearing the news, Schneider smiled.

“Hell no, I didn’t,” he said. “One day I’m going to sit down and track the miles traveled for her.”

That included making nearly every Phenom AAU game she played in for the past five or six years and several other interactions. He even went to Buenos Aires, Argentina to watch the Team USA squad that Nichols played on last summer, even though he knew she had COVID and would not be able to play.

“I just sat there and cheered for the team,” Schneider said.

Schneider was quick to point out that landing a prospect like Nichols was a “program win,” and he’s as happy for his assistant coaches and current players as he is for himself.

“I’ve got to give a ton of credit to our staff,” he said. “They created an environment for S’Mya that she knew she would be really, really comfortable in.”

Nichols has talent. And she’s expected to be a key part of the Kansas team right away when she joins the Jayhawks for the 2023-24 season. But her signing also figures to pay off in other ways, as well. Schneider said her addition to the roster could have “a significant impact on future recruiting,” and Nichols said she’s well aware of all of the young talent in the Kansas City area.

“Right now, there are so many Power 5 girls in Kansas City who are younger than me,” Nichols said. “What I’d say to them is you do not have to leave home to play at a big time program.”

Added Schneider: “Good players want to play with other good players, and she’s just a really, really impressive young woman. There’s the impact on the court. But there’s also the impact of the kind of young lady she is and how much she’s respected nationally as a player – especially in the state of Kansas and the KC metro area by other younger, really good players who, we think, are going to be really excited about the opportunity to play with S’Mya.”

Thanks Matt. Will there be follow up articles in the future regarding all the P5 players in the KC area. The guys side gets lots of coverage but much less so for the women. It would be nice to hear more.

No doubt she's a great player but I bet she misses at least 1 season with an injury.

For the past several seasons, KU's players on the floor matched up favorably vs. their Big 12 opponents' 2-5 players on the floor. It always seemed we would have been just fine, i.e., had it not been for that one WNBA-capable player on the other team, and that difference almost always doomed us to defeat. Well, looks like that's about to change. To land a player like Nichols required an edge of some sort. In this case, it was great persistent recruiting plus geographic proximity, and perhaps the program growth that she has been able to witness, as well. Top five caliber program does indeed have a nice ring to it! Heck, even elevating to a top 10ish program should be enough to attract more like her.