Kicking woes have Kansas football considering all options on 4th down 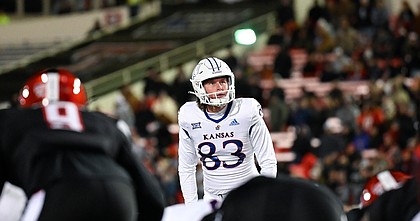 The kicking game continued to be an issue for the Kansas football program last weekend at Texas Tech, but the Jayhawks have tried to address it.

Kansas coach Lance Leipold said Monday that the team “opened the job back up” two weeks ago in an attempt to solve the team’s place-kicking woes.

Junior kicker Jacob Borcila emerged from that competition as the best man for the job.

“(We) gave other guys opportunities and he came out of that and, a week ago, he goes 3 for 3, so you’re feeling really good about it,” Leipold said.

That feeling was short lived. Borcila, who made 9 of 15 field goals in 12 games in 2021 and 6 of 9 in nine games during 2020, missed two field goals in the loss at Texas Tech, bringing his total to seven makes in 12 attempts so far this season.

“To miss two is highly disappointing,” Leipold said. “There’s times where we’re in a lot different position, momentum-wise, if we make those.”

Leipold said a missed field goal often carries with it the same disappointment of failing to score after getting a turnover on defense.

To make matters worse, both of Borcila’s misses against Texas Tech hit the right upright, with the banging sound signaling just how close both kicks were to going through.

In addition to evaluating whether Borcila was the right man for the job, the Jayhawks also have looked elsewhere, considering changes at long snapper and holder to try to get the problem fixed.

Beyond that, the coaching staff analyzes every detail of every kick in practices and games to try to make sure Borcila has every chance to succeed.

On Monday, Leipold listed off the factors they consider.

“It’s a fragile deal, the kicking world. It always has been,” Leipold said. “(We) watch approach, plant steps, follow through, contact points, where it’s held, timing, left hash, right hash, where it’s been, what’s the issue. You try to do them all.”

With field goals anything but automatic for Kansas no matter how far from the goalposts the ball is spotted, Leipold said the team’s recent kicking struggles has left the KU coaches thinking a little differently about what to do on fourth down.

“It definitely does,” Leipold said. “And Jacob knows that. Going for it on fourth down has changed a lot in football. And when you’re not exactly where you want to be in the field goal game, it’s probably going to change it more.”

While that approach is impacted by down and distance and the game script, Leipold said the biggest thing the Jayhawks are hoping for is Borcila to power through his slump.

Kansas football coach Lance Leipold talks about coming up short at Texas Tech & looks ahead to Texas by KUsports.com

KU RB Devin Neal on Texas & his heavy workload of late by KUsports.com

KU’s Sam Burt on playing his last game at Kansas by KUsports.com

KU DC Brian Borland on the challenge vs. Texas by KUsports.com

Go down to D2 or D3 and find the tallest basketball player in the country. Offer him a football scholarship. On 3rd and short or 4th and short, line him up appoximately 5 yards outside of the tackle (so he doesn't get caught up in the muck), on the snap, have him take two strides forward, post-up or don't post-up, I don't care, and basically throw him an alley oop pass. When he catches it, just take a knee.

It would be virtually indefensible by any defensive back in the country. Those guys are good athletes but, as Roy used to say, without even jumping, Ostertag still had the longest reach on the court. If the guy can jump a foot or so, even better.

No thanks needed by the way, I'm just trying to help the team win.

I'm 6'7". This was a staple of my intramural football teams. I'd go three strides upfield and catch it high. Don't know that it would work in real football, but it killed in intramural.

I am sure they are trying to figure out why his kicks push off the the right. If like to see a chart of his makes and misses. Really stinks when other guys are nailing 45+ FGs and splitting the uprights.