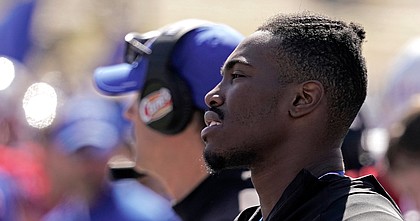 KU coach Lance Leipold said Monday that quarterback Jason Bean, who has started the past four games for the Jayhawks, was somewhat limited during Monday’s practice after coming out of the Texas Tech loss on Saturday and the Oklahoma State win before it.

“I don’t have a lot (to update on Bean),” Leipold said of the KU QB who was hit in the midsection late in both games. “He didn’t do very much today. He was out there, but we’ll see.”

At the same time, Leipold’s update on injured starter Jalon Daniels came the closest to being positive news as it has in weeks.

Both realities leave the question about Saturday’s starter against Texas — 2:30 p.m. at Memorial Stadium on FS1 — up in the air, and KU’s depth chart, which had Daniels and Bean separated by an “or” continues to reflect that.

“He’s close,” Leipold said of Daniels on Monday. “He’s taken more and more reps. He went today, and he’s at the point where he can play at a level that’s going to allow him to go out there and play freely.”

If Daniels plays, Leipold said nobody should expect to see him at 100% the way he was at the beginning of the season. But he also said the evaluation of Daniels’ availability was a daily to every-other-day conversation that likely will continue throughout the week.

“If you’re watching him in warm-ups, you can see it,” Leipold said. “He’s really, really close, but there’s a lot of factors that continue to go into that. We’ve got two regular season games left, so hopefully he’s going to be out there for one or two of them.”

The game marked Vasko’s first college appearance and, with three games remaining — counting the bowl game — Vasko could play in all three and still be able to redshirt. NCAA rules allow players to appear in up to four games before losing the chance to redshirt.

With Daniels out and trying to return, Leipold said KU’s coaching staff had to create contingency plans for a lot of different scenarios in recent weeks in the event that Bean had to leave the game either because of injury or something trivial like an equipment malfunction.

There also, of course, was the creation of a plan to relieve Bean — and keep him healthy — in a game the Jayhawks were winning. Daniels’ health and Vasko’s redshirt potential played a factor in those talks. So did the presence of redshirt freshman QB Ben Easters.

All in all, Leipold liked what he saw from the planning stages all the way to Vasko entering last weekend’s game.

“It was a small, small sample size,” Leipold said. “But there were some flashes of Ethan Vasko that I was very, very pleased with for his first college experience. That shows he’s going to be a good quarterback.”

The Big 12 Conference announced Monday that the Jayhawks' regular season finale slated for Nov. 26 at Kansas State will kick off at 7 p.m. on FOX.

The game could be big for both teams even beyond the annual bragging rights that are on the line when these two get together. For Kansas State, a berth in the Big 12 title game could be on the line. For Kansas, an additional win and the chance to improve KU's bowl positioning will be at stake.

This year's game will be the 120th played between the two programs. The KU-K-State series dates back to 1902, making it the fourth-longest active series in FBS and the second longest in-state rivalry among FBS programs.

Kansas football coach Lance Leipold talks about coming up short at Texas Tech & looks ahead to Texas by KUsports.com

Ain't no way JD6 isn't coming back and beating Texas for the second year in a row.

I'm curious to know whether bowl eligible means a guarantee for being in a bowl or not. That might change how many games we have left.

Definitely does not mean it's guaranteed. Teams with 6 wins have been left out before. But it doesn't happen very often and I would think Kansas is in good shape given how their season has gone and that they've been a national story most weeks.

So it should be 2 regular season games and the bowl for a total of 3 more.

The 2006 schedule shows KU played only 1 ( Nebraska - 21 ) ranked team that year. This season's schedule was much more brutal, we'll get an invite :)

I provided this same answer on a KU Facebook group and was "murdered" for being so negative 😀. That said, I agree that the KU "story" this years should make them a shoo-in for a bowl. One has to think KU fans will travel well (and the primary historical reason communities host a bowl game)

Just play Vasko this week and save Daniels and Bean for K-State...that is the more important game...with the home crowd...who knows...maybe Vasko will perform like Will Howard has for little brother...get him out there and get him baptized against a pretty good defense and see what happens...I personally like Vasko and want to see more of him...it is a great opportunity on a lot of levels...if it was my team...I would let the other guys heal up this week.

There’s like a dozen more bowl games now than 2006. There are so many slots now the possibility of 5-7 teams getting a bowl comes up every year.

No way a P5 team that is eligible doesn’t get an invite.

Hey, at this point I'll sign up for the Chico's Bail Bonds Bowl in east L.A. Nobody expected to be bowl eligible this year.

Brad, I respectfully disagree. Any time we have the opportunity to beat the T-sips, we need to take advantage of it.

I'm not so sure Brad isn't right. It doesn't hurt to try and win without sacrificing players. If I were coach I would let Vasko know he's on a short leash. Start Vasko and if see if he can score early and and get out ahead. If we get behind then bring in someone else. If Vasko had a good head he can understand its an opportunity to see how well he can do without putting him in a no win situation. KU has proven that we can come from behind 7 points down and both Daniels and Bean have done it. The time to test Vasko out in this situation is early in the game and see where it goes.