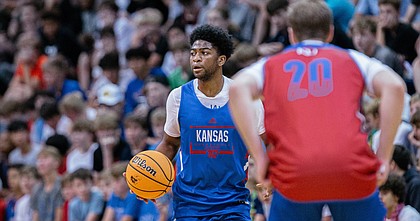 Kansas guard Kyle Cuffe Jr. suffered a knee injury during Saturday’s practice and will be out an extended period of time.

According to acting KU coach Norm Roberts, Cuffe tore his MCL and PCL ligaments while running up the court in practice. Roberts said it was a non-contact injury and that Cuffe is expected to be able to return to basketball activities in 10-12 weeks.

“Doctors are really, really confident that surgery is not needed,” Roberts said.

Roberts added that Cuffe was down about the injury and that he was “a great kid” who would work hard to rehab the injury and help the team however he can in the meantime.

In other injury news, KU forward Zach Clemence, who was hit in the face late in KU’s win over North Dakota State on Thursday, is listed as day-to-day with a nose/face injury.

Clemence was not expected to participate in Sunday’s practice and Roberts said he was not sure yet whether Clemence would be able to play in Tuesday’s game against Duke at the Champions Classic in Indianapolis.

Tipoff for that one is slated for 8:30 p.m. on ESPN from Gainbridge Fieldhouse.

Acting Kansas coach Norm Roberts on the Jayhawks’ start and step up in competition vs. Duke by KUsports.com

KU guard Dajuan Harris Jr. on the upcoming matchup with Duke by KUsports.com

Ouch, since he's had a normal redshirt, is there a medical redshirt available?

You bet. And depending on how his rehab goes, that may very well be the way this goes for Kyle. If so, he'd move into the 2023-24 season with 4 years of eligibility remaining. And, he was young when he arrived at KU, so he'd actually be in pretty good shape — eligibility-wise anyway.

And Cam is still out also, yes? Doesn’t he have another week or so?

Stinks for Cuffee. He’s gotta be itchin to get back to playing games. Seems like a great kid. Really enjoyed a documentary that followed him around the ’hood after committing.

Wasn’t Dook without a couple of their young bigs to start the season? Any word if they’ll be able to play Tuesday?

What a shame. Unfortunately, injuries will happen during the course of a season. Self's team have had different histories of being healthy for a season. Hopefully, Mr. Cuffe is a quick healer, but his next games are likely next season. Hang in there and best of luck with your rehab. Rock Chalk.

If there’s one player we can afford to redshirt right now with current firepower it’s definitely Cuffe Jr. will work out fine all the way around.

Fun fact and question: KU now has 6 (6!) players sporting “Jr.” on their Jersey - a trend I accelerating only as I recall going back to Selden Jr. any other college bb team ever have such a quirky consistency up and down the lineup like this?
Matt- got a feature for us in the works ;)?